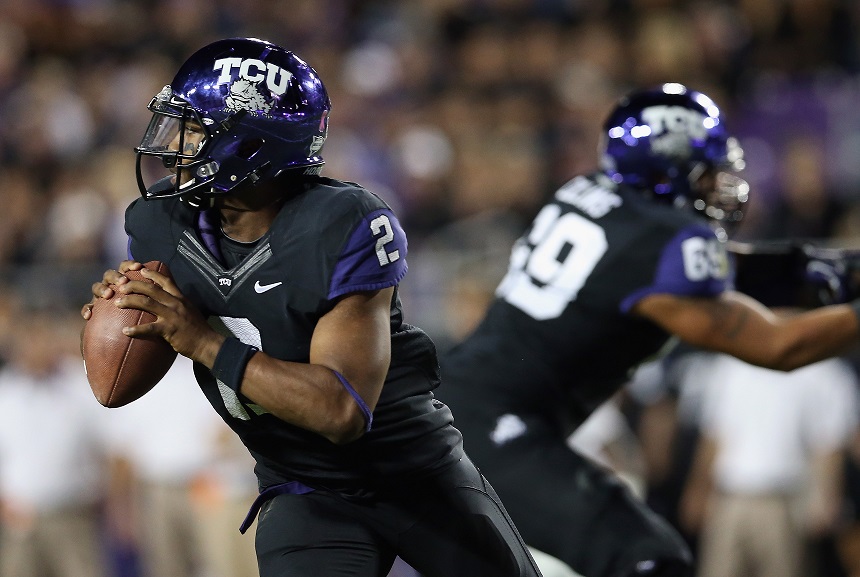 NCAA Football Betting News
Football fans tend to fall into a pair of different categories. There are those who love low-scoring, smash mouth ball were both teams leave the field battered and bruised. Then there are those who love the deep ball and final scores that make you wonder if you are looking at a football or basketball final result. Those who love that second brand of football may be in for a treat when #7 TCU head into West Virginia to take on the #20 Mountaineers this weekend, but unlike last week’s game vs Texas Tech, don’s expect double digit football betting odds for this game.Venue: Mountaineer Field at Milan Puskar StadiumDate/Time: Saturday, Nov. 1, 2014, 3:30 PM ETBroadcast on ABC/ESPN2 If you want to know whether or not the Horned Frogs have an idea of where the end zone is, just take a look at their 82-27 demolition of Texas tech last weekend. They had 785 yards of total offense, split almost evenly between the pass and the run. While those may be pretty lofty numbers, they are somewhat indicative of what TCU has been doing all season. They have also had two game where they scored 50 or more points, although one of them came in a stunning 58-61 loss to Baylor.West Virginia are no strangers to the touchdown dance either, with their lowest offensive single game output this season coming in at 33. Their biggest issue this season has been a run defense that has been inconsistent at best. When they are good, they are great, but when they struggle, they seem to go down hard. The best example of that is the 301 yards they gave up on the ground in a loss to Oklahoma, which they then followed up by holding Kansas to just 65 yards the following week.

BETTING ODDSCollege football odds for this game have not been defined yet. At the time of writing, the point total was still set to OFF, but you have to imagine it will be somewhere in the low 70’s. Now, TCU is expected to come into this one as a 6/8-point road favorite, and they have certainly been a spread bettors dream come true this season. These two have only met once before over the past 3 years, and it was the Horned Frogs who prevailed SU and ATS. Oddly enough, the Mountaineers have been better ATS on the road than they have at home this season, and it could be another rough one if that run defense does not stand tall this weekend.
Older post
Newer post