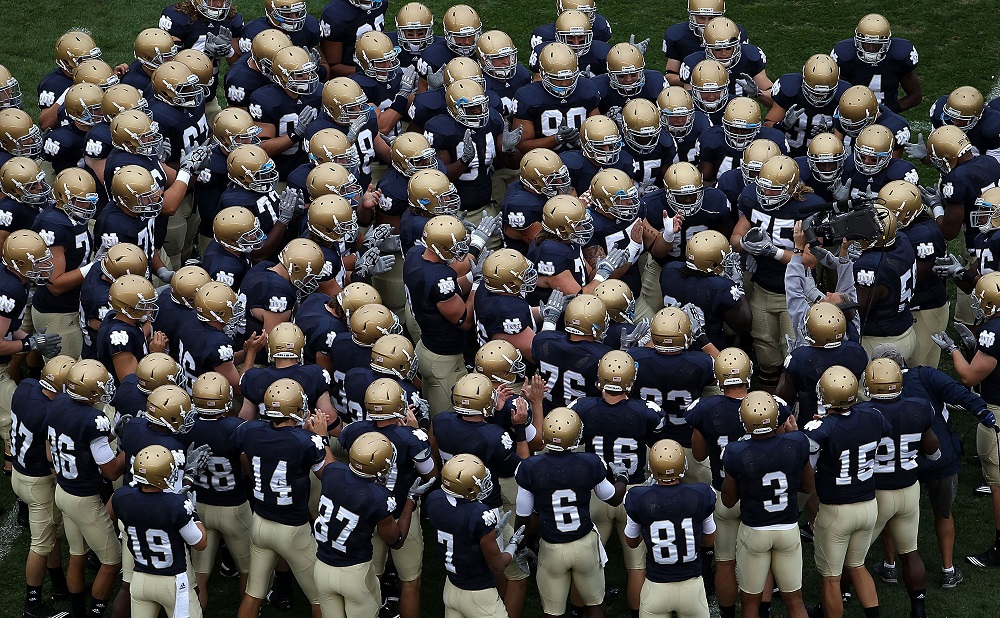 NCAA Football Betting News
It used to be that a single loss during the college football season would pretty much take you out of National Championship consideration. The addition of a playoff system has changed that, though, and there are a bunch of one loss teams who are still living in hope that they can sneak their way into that top 4. A pair of those teams meet this weekend in what promises to be a pretty exciting match-up. we bring you the football betting lines and predictions for this Saturday’s game. Notre Dame (#10) come into their match-up with Arizona State (#9) with a 7-1 record, but they were a pick play away from being perfect. It looked as though the Fighting Irish had done enough to knock off the Florida State Seminoles a couple of weeks back, but a late TD was called back after the refs deemed one the Notre Dame receivers had interfered just a little too much. There was a lot of wailing and complaining from football fans across the country, but those in the know believed it to be the right call.

Arizona State have come by their 7-1 record by playing it tight defensively. Their lone loss on the season came against a UCLA team that tore hat normally great defense to shreds. They had another close call the week after that loss, holding on to beat USC 38-34. Since that point, they have shut up shop, giving up a total of just 36 points in a three game stretch. They are going to have to be great again if they are to hold off Notre Dame, especially of the Irish try to run that ball down their throats.

The bookies have given the Sun Devils the home edge by installing them as 2.5-point favorites for this one. Arizona is only 4-4 ATS this season, which includes being 1-3 at home, although when they have failed to cover it has been when they have been a heavier favorite than what they are this weekend. Notre Dame is 5-3 ATS this season, and are a perfect 2-0 ATS as an underdog. They are going to have to be at their very best to cover in this one, which will likely mean establishing that run game early on. Football Game Odds: NOTRE DAME: +2½-110 ARIZONA STATE: -2½-110 Arizona State are not the type of team that are going to blow anyone out, choosing instead to play a stifling brand of football that tends to keep their opponents in it till the end. I like the home field advantage here, and while I think it will be close, I do think the Sun devils will win and cover the 2.5-points.
Older post
Newer post