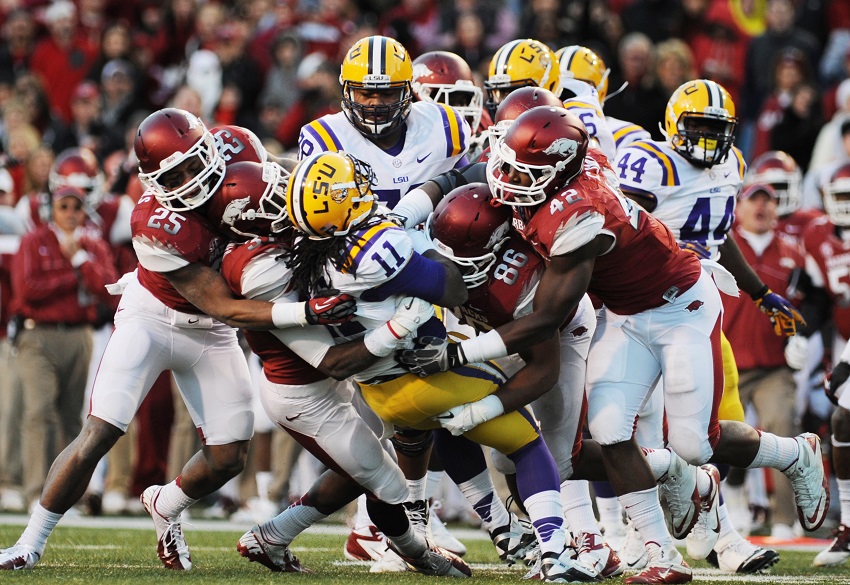 NCAA Football Betting News
When looking through the TV schedule and college football lines to find the games to watch on Saturday, most people look for match-ups between ranked opponents, or games that can have a real bearing on a division or conference race. That often means that potentially great match-ups get overlooked if it appears that nothing is really at stake. One such game that fits that bill this weekend sees LSU go on the road to face Arkansas.
Date/time: Saturday, November 15, 8:00 PM
Location: Reynolds Razorback Stadium, Fayetteville, Arkansas
LSU are a whole lot better than their 7-3 record might suggest. In fact, if you throw out the beating they took at the hands of Auburn, this is a team that could very easily be 9-1 and sitting in prime playoff position right now. Their toughest loss of the season had to be last week against Alabama. The Tigers looked to have the game won late, but Blake Sims led the Crimson Tide on a late drive to tie things up and take the game to OT, where Alabama prevailed. If you have to point your finger at a potential issue for LSU, it has been their ability to score points in the big games.

You think this guy is ready to play LSU under the lights? @RAE_Toliver5 #TakeTheBoot #WPS pic.twitter.com/VgO3FnHBKd— Razorback Football (@RazorbackFB) November 12, 2014

Another team that is better than their record suggests is the Arkansas Razorbacks, as they have been timely competitive despite only sporting a 4-5 record. They have had an incredibly tough schedule to navigate this season, playing in an SEC West Division that is arguably the best in all of college football. They have pretty much been in every game they have played, right to the end, so LSU cannot look at the record of this team and think they have an easy one on their hands.BETTING ODDSBettors who don’t know much about these two teams may be surprised to see the sub .500 team listed as a 2-point favorite, but that is exactly what the line is here. Arkansas has been great against the spread all year, going 7-2 overall and 4-1 at home.LSU holds that same 7-3 ATS record on the season, but all three times that they have failed to cover has been against conference opponents. These two have only met one other time in Arkansas over the past three seasons, with LSU coming out as the winner and Arkansas covering.Game OddsMISSISSIPPI STATE: +9½-110, OV 52 -110, ML +290ALABAMA: -9½-110, UN 52 -110, ML -340This game has all the makings of a hard-hitting, tight affair, and I believe that the very short line is a great indicator of what to expect. While Arkansas has played everyone tight this year, they have developed a habit of losing to opponents with a better record, which is why I the consensus points towards LSU to win this match.
Older post
Newer post