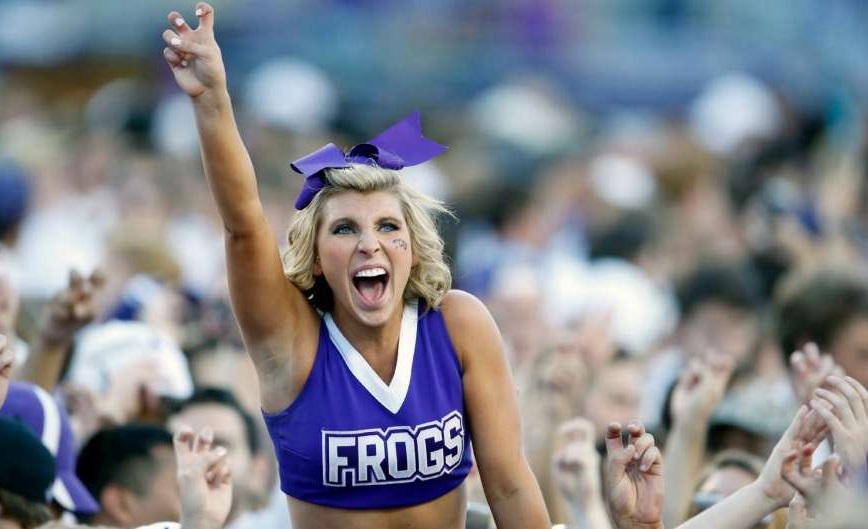 NCAA Football Betting News
You often see a shift in momentum change the outcome of a game, but there are also times when that shift is sustained to the point where it can change an entire season. One team that is benefiting from a huge momentum shift is the TCU Horned Frogs, who been tagged as one of the top candidates to get to the postseason, and will enter this game as a heavy favorite in the NCAAF betting odds. They have quietly gone about their business while other contenders faltered, and the College Football Playoff Ranking Committee is sitting up and taking notice.
Date/Time: Saturday, November 15, 3:00 PM
Location: Kivisto Field at Memorial Stadium, Lawrence, Kansas
Broadcast on
TCU could have easily packed it up for the season after losing 58-61 to Baylor in a game where they were winning by 21 points with a little over 11 minutes to play. That would be demoralizing to most teams, but the Horned Frogs shrugged it off and went on a 4-game winning streak where they racked up 196 points. They have pounded teams into submission both on the ground and through the air, showing off a balanced attack that is impossible to ignore. They seem to understand the need for style points in college ball, which is why Kansas has to be more than a little concerned coming into the weekend.

The Jayhawks are just 3-6 on the season, and their win against Iowa State last week came after a horrible run that saw them lose 5 straight. Their offense was pretty appalling during that stretch, but it also didn’t help that the defense seemed to be made of Swiss cheese. Where Kansas could really end up being hurt this coming weekend is in the turnover battle. TCU loves to take the ball away, and if that happens, the rout could be on from the moment the first ball is kicked.BETTING ODDSIt’s no real surprise that TCU have been installed as massive favorites here, with the line set at 28-points. While that may seem like a big number, TCU are a stunning 8-1 ATS, which includes being 5-1 ATS versus conference opponents. Their only slip up was against a very good West Virginia team, which was a game that they still manage to win despite not covering. Kansas re pretty much at or near .500 in all of their stats, besides the all-important win/loss of course, so there is nothing there to suggest they might spring the upset.Game OddsTCU: -28-110, OV 58 -110KANSAS: +28-110, UN 58 -110TCU are going to roll over the Jayhawks this weekend, but the big question is by just how much. I tend to shy away from favorites with this type of hefty line, but I actually like the look of this one.
Older post
Newer post