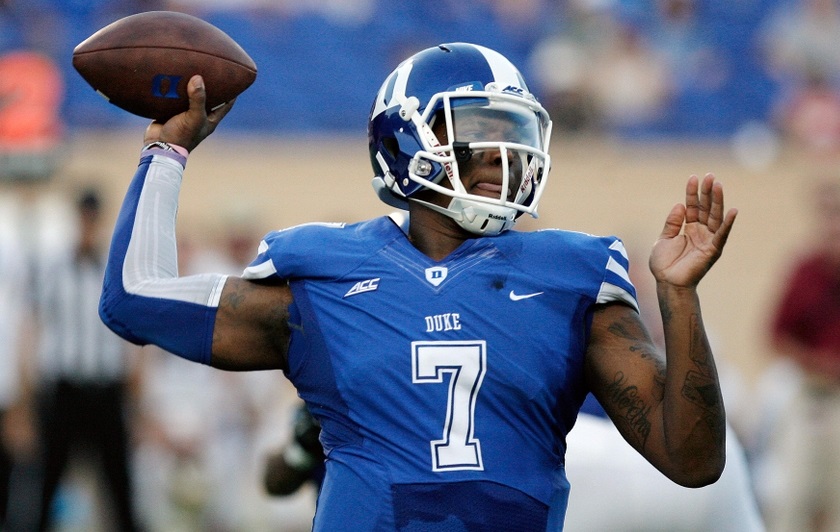 NCAA Football Betting News
When you have a team that is particularly dominant in the conference they play in, he excellent seasons that other teams are having tend to be overlooked. What Florida State have been doing in the ACC for the past two years is what is getting all the press. That means that many have overlooked the fine play of Duke this season, as they have compiled an 8-2 record and a top 25 ranking. They play on Thursday night this week, which means they may actually be seen by college fans who would otherwise skip their games. So let’s review the NCAAF odds and other info heading to this game.
Date/Time: Thursday, November 20, 7:30 PM
Location: Wallace Wade Stadium, Durham, North Carolina
Duke will welcome in the North Carolina Tar Heels on Thursday, and will be looking to rebound from their 16-17 loss to Virginia Tech. Prior to that loss, the Blue Devils had strung together 4 straight wins, although few of them were of the dominant variety. This is a team that generally seems to find themselves in tight battles, but that fact that they have been able to come out on the winning end of things tells you a little about the character of this group.

North Carolina have had a bit of a bumpy ride this season, going 5-5 to this point. That said, their form as of late has been pretty good, as they have been able to win 3 of their last 4, with the only loss during that stretch coming at the hands of a very good Miami team. Where they have been let down this season is on the road, as they have only been able to win 1 of their 5 road trips so far. That does not bode well for them this coming Thursday.

Given the troubles that the Tar Heels have had on the road, it’s no real surprise that Duke have been installed as a 6-point home favorite. They have handled the favorite label very well this season, going 5-2 ATS. They are 4-1 ATS at home, and also having a winning record versus conference opponents. North Carolina have not been a favorite with bettors, unless of course you have been playing against them. They are 4-6 ATS on the season, which includes being 2-4 ATS as an underdog. These two teams have met twice over the past three seasons, and it was Duke going 2-0 SU and ATS.Game Odds:NORTH CAROLINA: +6-110, OV 66 ½ -110, ML +190DUKE: -6-110, UN 66 ½ -110, ML -230The odds look to be heavily stacked against the Tar Heels in this one, and they may very well be in for a long night. This is a team that has been very ineffective on the road this season, and I see this being a double digit loss for them.
Older post
Newer post