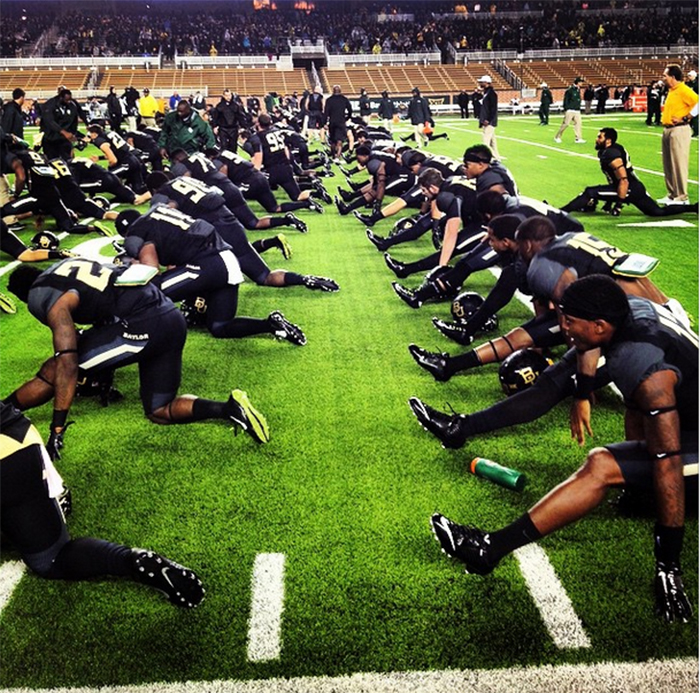 NCAA Football Betting News
The college football season is drawing to a close, which means that those teams on the outside looking in at the Top 4 have only a couple of opportunities left in which to impress the playoff committee. One of those teams on the outside looking in is the Baylor Bears, and you have to feel that their match-up with Texas Tech this weekend will offer them another chance to really run up the score and snag some style points. The NCAAF betting odds are crystal clear but you decide what team to pick, here is how:Date/Time: Saturday, November 28th, 3:30 PMLocation: AT&T Stadium, Arlington, TexasThe Baylor Bears have been an offensive juggernaut all year long, averaging 50 point per game and beating their opponents every which way but loose. Their only loss this season came against a very good West Virginia Mountaineers team that was able to hold the Bears to just 27 points on the day. What killed Baylor on that day was their inability to move the ball on the ground. They have pounded the rock all year, helping them leave the air game wide open. It has worked to devastating effect, and is likely to do so again this weekend.At 4-7, Texas tech are now just playing out the season with nothing but pride at stake. They were able to pull out a win against Iowa State last weekend, breaking a 3-game losing skid in the process. Despite that win, the defense still gave up 265-yards on the ground, which is actually quite respectable compared to some other weeks. If they cannot find a way to shore up that run defense, they may be seeing the back end of Bears all day long.

Everyone was expecting a big number when the lines were released earlier this week, and the bookies did not disappoint. Baylor will be a 25-point favorite for this one, and will be looking to build upon their 6-3 ATS record for the season. Baylor actually seems to enjoy these big lines, as they are 5-1 ATS over the last three season when they are favored by 21.5 to 31 points. Texas tech are just 5-6 ATS this season, and their November record over the past three seasons is a less than stellar 2-9 ATS.Game OddsBAYLOR: -25-110, OV 79 ½ -110TEXAS TECH: +25-110, UN 79 ½ -110I have said, more than once, that I am not a fan of games with spreads of this size, but there are times when they seem like a pretty good play. This looks like being one of those, as I expect Baylor to run up and down the field at will, covering the 25-points in the process.
Older post
Newer post