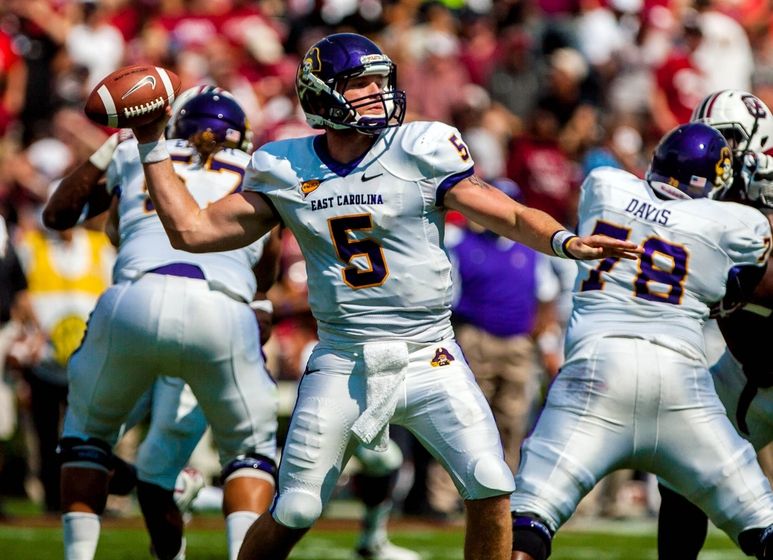 NCAA Football Betting News
Week 3 of college football betting action brought us many surprises that no one could have predicted, with some of the top teams in the nation getting their first loss of the season. Saturday was full of surprises and games that turned out to be a lot closer than any betting fan could think. Boston College shocked No. 9 USC, Virginia Tech lost at home to the East Carolina Pirates only one week after putting together a historic upset at Ohio State. Kentucky forced the Florida Gators to play three overtimes. South Carolina handed No. 6 Georgia a stunning defeat, and Virginia knocked off the No. 21 ranked Louisville Cardinals. So let’s get this thing going and review the winners and losers from Week 3.

East Carolina Pirates (2-1, 0-0) The East Carolina Pirates stunned NCAA football fans with a 28-21 victory over No. 17 Virginia Tech on Saturday, and achieved their first on the road win over a ranked team since 1996. The victory also snapped a five-game losing streak to ranked opponents. Only one week after a huge road victory over then-No. 8 Ohio State, the Pirates East did the same thing to the Hokies in Blacksburg, jumping to a 21-0 lead in the first quarter. Despite their efforts and the late comeback, Virginia Tech was unable to get over a Pirates defense that looked dominant in almost every instance of the game. South Carolina Gamecocks (2-1, 1-1 SEC) After a 52-28 blowout to Texas A&M in the opener two weeks ago, South Carolina is once again pointing forward in the playoff picture thanks to a big 38-35 home win over No. 6 Georgia, proving fans that No. 6 Georgia isn’t the only favorite in the Southeastern Conference Eastern Division. Just when it looked like the Bulldogs were taking the lead thanks to an interception with 5:24 remaining, the South Carolina defense found the way to contain Georgia’s offense and force the Bulldogs had to settle for a field goal that would have tied the game. But against all odds, kicker Marshall Morgan, who set an SEC record with 20 straight makes earlier in the game, missed wide right with 4:24 on the clock. That set up the Gamecocks’ final drive and sealed a victory that puts them back in the SEC East race. Virginia Cavaliers (2-1, 1-0 ACC) The surprising win over Louisville had great value for the Cavaliers for several reasons: Number one, is always nice to kick a favorite team in the face. Number two, the victory ended an 11-game Atlantic Coast Conference losing streak and a 10-game skid against FBS-level competition. It also marked Virginia’s first victory against a ranked team since a 14-13 win at Florida State on November 19, 2011. Louisville stormed back from a 20-7 deficit and score 14-points in the 4th quarter. The Cardinals had an extra chance to increase the lead, but after Cavaliers defensive back Kelvin Rainey recovered a fumble at the 25-yard-line, things were set for a game-winner field goal. With Virginia trailing 21-20 and less than four minutes remaining on the clock, kicker Ian Frye scored a 42-yard field goal with 3:41 left to go in the fourth quarter that gave Virginia the victory

Indiana Hoosiers (1-1, 0-0 Big Ten) Saturday’s game between the Indiana Hoosiers and the Bowling Green Flacons is a clear example that It ain’t over till the fat lady sings. A pair of back-to-back pass interference penalties by the Indiana Hoosiers in the last minute of play opened a chance for Bowling Green Falcons to come up with a 45-42 upset with nine seconds to play. Hoosiers and Falcons alternated the final eight touchdowns, with the Falcons scoring the last one on the last instance of the game. With the loss the Hoosiers became the third Big Ten team to lose to a team from the Mid-American Conference in the past two weeks. USC Trojans (2-1, 1-0 Pac-12) The No. 9 USC Trojans were handed their first loss of the season Saturday night against the Boston College Eagles, who put up 24 unanswered points to emerge with the 37-31 victory. The Trojans were coming off a 13-10 win over Pac-12 rival Stanford that moved them up five spots in the AP Top 25 poll, but after the loss to a Boston College team that hasn’t won over a top 10 opponent since 2004; they will definitely lose a few spots in the national rankings.
Older post
Newer post