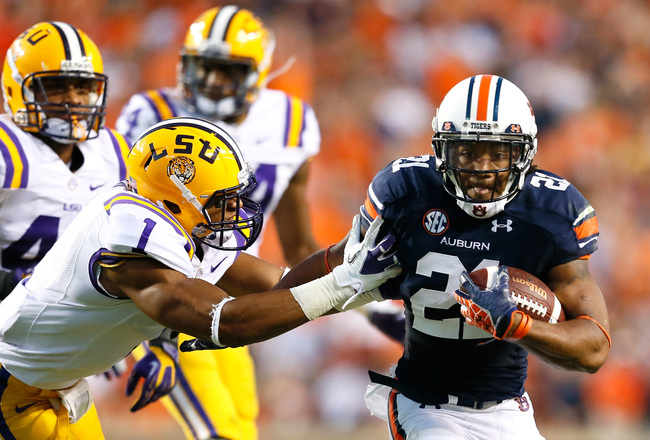 NCAA Football Betting News
Week 6 calendar is stuffed with top games, including a SEC battle between two division contenders and betting favorites in the lines on college football. This time the No.5 ranked Auburn Tigers will be looking to avenge their only loss in the SEC last year, when they host the 15th ranked LSU Tigers on Saturday. Auburn is undefeated so far this season, and LSU suffered a surprising SEC conference loss in the season opener against Mississippi State, and will like to get back in the national championship race with a road victory over Auburn that should put them back in the top 10.

Auburn is starting the toughest stretch of their schedule, with their toughest test so far this season. They will be playing five of their next seven games against teams that are ranked in the top 15, which means they can’t afford to slip up at home against LSU, because they play four of their last seven games on the road, which makes it important for them to take care of business at home.LSU needs to get back in the playoff conversation with a win over Auburn, they will be very confident going into this game because they have defeated the Tigers three times in a row, and have won 6 of their last seven meetings.

Auburn played a big game on the road two weeks ago against Kansas State, and were able to handle the pressure of playing in a hostile environment very well, and managed to win a game that was close all the way 20-14. Luckily for them, they are playing LSU at home, and will have the crowd behind them.Auburn was the best running team in the country last year, but they have dropped off a little this year, and average 260 yards per game, which is 18th in the country. While those numbers are pretty good, they have managed to gain most of them against teams with bad run defense, and only managed 128 yards on 45 carries against Kansas State a couple of weeks ago, which might me a cause for concern for coach Malzhan.Game Odds:LSU: +7½-110, ML +260AUBURN: -7½-110, ML -310LSU has had offensive problems of their own, which have caused them to fall behind early in some games, they were able to rally and win against Wisconsin in their season opener, but were unable to do so against Mississippi State.LSU also has a a quarterback situation going on, their regular season starter Anthony Jennings has been very inconsistent this season, and is only completing 50 percent of his passes, so head coach Les Miles is giving freshman quarterback Brandon Harris the chance to start this game. The move might help the team’s offense, but giving a freshman the start in a hostile environment can also lead to disaster.

Both teams have struggled offensively against good teams, but based solely on the records and football betting spread,  bettors must keep an eye on Auburn. They have struggled a bit, but they are also a solid team when playing at home. On top of that LSU will be starting a freshman quarterback who hasn’t seen a lot of action this season, which makes the Auburn Tigers look much more attractive entering the game.
Older post
Newer post