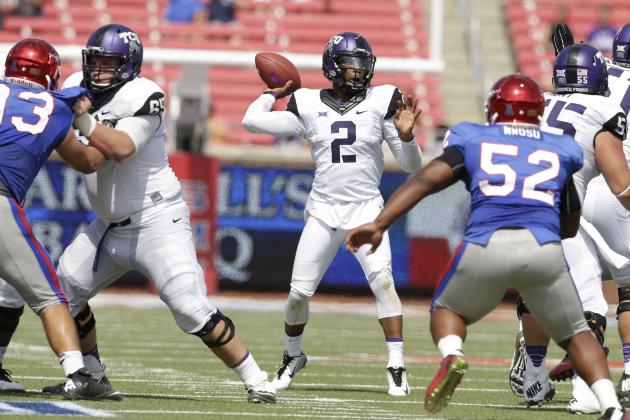 NCAA Football Betting News
The 25th ranked TCU Horned Frogs will face the toughest challenge of their season when they play the No.4 ranked Oklahoma. At first sight the game looks like an easy victory for the Sooners, but really isn’t, in fact the NCAA football betting lines favor Oklahoma only by a slight margin. The recent games between these two squads have been very close. Both teams are undefeated so far this season and will enter this games coming from great victories.  Last week the Horned Frogs demolished the SMU MUstangs 56-0, while the Sooners managed to beat West Virginia 45-33. The two teams met last season in Norman, Oklahoma, and the Sooners barely escaped with a 20-17 victory, but this time they will be facing another tough test against the Horned frogs in Forth Worth, Texas.

The Sooners have not played a ranked team this season, but they are coming off two big wins against the Tennessee Volts and West Virginia Mountaineers. The Sooners have won the first four games of the season by a large margin of points, but they will need to stay focused against TCU, and not overlook the Horned Frogs because they play their rivals Texas in the Red River showdown after this game.The Horned Frogs have a brutal stretch in their schedule ahead of them, and will play the 7th ranked Baylor Bears after this game, they need to take advantage of a home game against the Sooners, before they head on the road to face the Bears.

The Sooners are 3-1 ATS this season, and will face a tough test against TCU, who will be trying to end a three game losing streak to the Sooners. A loss to the Horned Frogs will jeopardize Oklahoma’s chances of playing in the playoffs this year, so they need to handle their business against TCU.The Frogs are 3-0 ATS this year, they handed a 4-1 Minnesota team their first loss of the season, with an impressive 30-7 victory at home, two weeks ago, and shut out SMU 56-0 last week. They have played well all season long, especially on defense, and they will try to slow down Oklahoma’s high scoring offense, which averages 44.8 points per game.Oklahoma has won four of the last five games between these two teams, but the games have all been close, except for the 35-10 victory Oklahoma had at home in 2008.Game Odds:OKLAHOMA:-4½-110TCU: +4½-110Betting Tips

This game has the potential to be a letdown game for Oklahoma, who might be looking forward to their game against Texas, a team that defeated them when they were undefeated and the 12th ranked team in the country last year. I think will underestimate the Horned Frogs, and that despite having the football odds and lines on their favor, they’ll lose their first game of the season.
Older post
Newer post