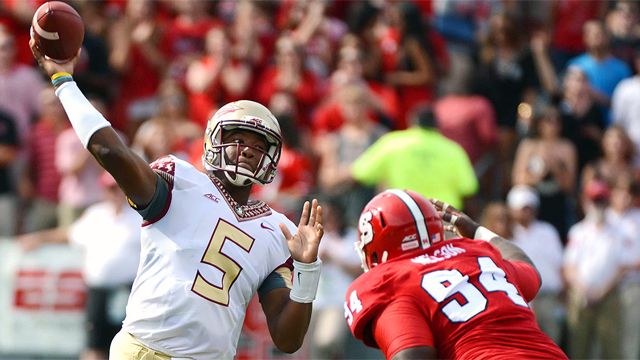 NCAA Football Betting News
Entering Week 5 of the 2014 College Football season, there were 25 undefeated teams among the 128 in FBS. After last Saturday, only 17 remain unbeaten, which had a direct impact on the current college football rankings. Almost half of these teams are coming from the Southeastern Conference (Alabama, Auburn, Mississippi State, Texas A&M, Ole Miss), 3 teams are from Pac-12 (Oregon, Arizona, and UCLA) and two more are independent (Notre Dame and BYU).For the most part, Week 5 didn’t bring many surprises, in fact the top 5 teams in the nation closed the weekend without incurring real damage, but by looking the current standings and AP rankings, a few things are becoming quite clear days ahead of Week 6:With the first whole month of college football action in the record books, the playoff field is slowly starting to take shape up. So here’s a quick look at what’s happened in Week 5:

At some point of the game between the Razorbacks and Aggies, fans and bettors got the impression that Arkansas was about to blow Texas A&M. The game in fact looked like it was Arkansas’ to win several times, but it just went to show why the Aggies are one of the top programs in the NCAA.Led by QB Kenny Hill, Texas A&M was down 28-14 in the fourth quarter, but Hill showed the Aggies are fine without QB Johnny Manziel, connecting touchdown passes of 86 and 59 yards and taking the game to OT. Hill did it again in OT, throwing a 25-yard touchdown pass on the first play. The Aggies stopped the Razorbacks on a 4 and 1 to ultimately win the game 35-28.

Week 5 was a highly productive for most SEC teams (With the exception of Arkansas), and even the non ranked teams achieved good results. The Kentucky Wildcats snapped its 17-game SEC losing streak with a 17-7 victory over Vanderbilt on Saturday, the first win since a streak-busting win over Tennessee Vols on November 26, 2011. With this victory, the Wildcats are off to their best start since 2010 with 3 wins and 1 loss. The Wildcats will now prepare to play the No.13 ranked South Carolina Gamecocks at home on next Saturday.

UCLA stands up as a true playoff contender.

The UCLA Bruins had a tremendous performance against No. 12 Arizona State Thursday night, beating the Sun Devils 62-27. The Bruins were behind 10-6 in the first quarter before rallying the Sun Devils 21-7 rally in the second quarter to take a 27-17 lead entering the second half. ASU tried to battle back, but UCLA was just too tough for them, stretching its run to 35-10 on the second half of the game to win this pivotal Pac-12 showdown and stop ASU in their own territory.

FSU rallies from 17 down to win its 20th straight game.