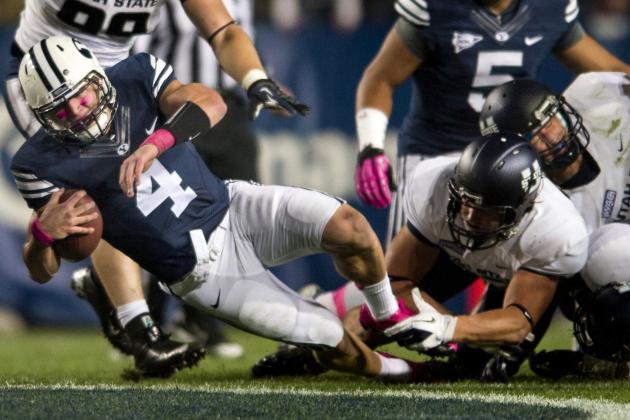 NCAA Football Betting News
The Utah State Aggies of the Mountain West conference go on the road to face unbeaten BYU (#20) in a Friday night game under the lights in Provo, Utah. While some might look at this one as a bit of a mismatch (4-0 team vs 2-2 team, BYU also leads the college football lines by 20-points), there is more in play in this game than what any of us may think. But before we get into how these two have gone head to head in the past, let’s take a look at how their seasons have gone so far.

The BYU Cougars come into this game with a perfect 4-0 record, but they have huffed and puffed a little on their way to the last two wins. Things got off well enough with a pair of easy victories on the road against the Connecticut Huskies and Texas Longhorns. They comfortably covered the spread in both of those wins, yet failed to do so in their home games against Houston and Virginia. It’s fair to say that the bookies may have got a little excited about BYU’s big 41-7 win over Texas, which may have led them to believe that BYU are better than they really are, leading to larger spreads being put in place for the home games.Utah State is a different animal than BYU. The Aggies sit at 2-2 on the season, with both losses coming on the road to Tennessee and Arkansas State. They have failed to cover the spread in any of their 4 games so far, which again might lead you to believe that this trend will continue on Friday night. On top of that, Utah State quarterback Chuckie Keeton will be out against BYU and possibly the rest of the season, the school announced Wednesday.Game Odds:UTAH STATE: +20½-105, OV 50 ½ -110BYU: -20½-115, UN 50 ½ -110If you want to look for the real trends coming into this one, forget about what both teams have done this season, and instead look at how they have matched up head to head over the years. But it is here that we would have to steal a phrase from Lee Corso on College Gameday: “Not so fast, my friend.” BYU has definitely had the number of Utah State straight up, but they have not been so dominant ATS. The opposite is in fact true there, with Utah State being the dominant one. They are 8-3 ATS going back to 1992, which includes being 4-2 ATS when playing in Utah.All of that makes BYU seem like a rather fragile 20.5-point favorite, especially considering how they have fared at home this season. The point total of 51 also looks to be in trouble, with 7 of the 9 games since 1992 going UNDER.HOW TO PLAYAll signs point to Utah State covering the football betting spread and the point total going over. If you want to get some action for this coming weekend, put your money on BYU, straight up would likely be your safest play.
Older post
Newer post