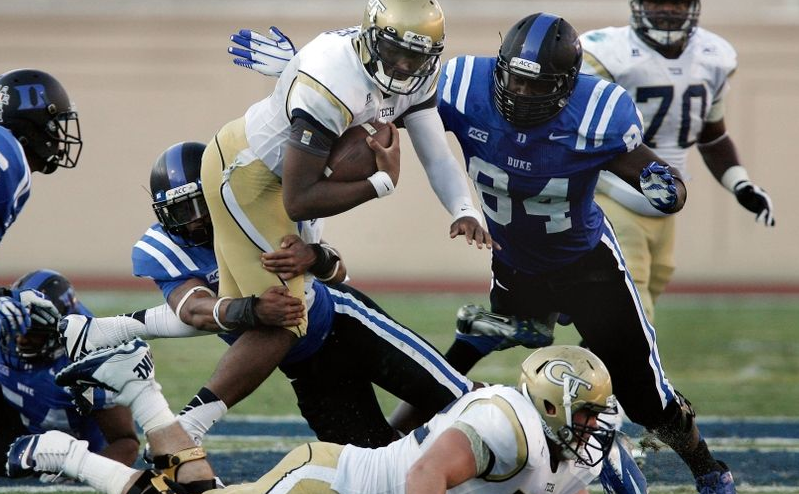 NCAA Football Betting News
After getting sufficient rest during their bye week, the Duke Blue Devils travel to the Bobby Dodd Stadium to face the Georgia Tech Yellow Jackets this Saturday. Interestingly, both teams played the Miami Hurricanes in their previous games, with the Blue Devils losing 22-10 before their bye week while the Yellow Jackets won 28-17. Would that have an impact on their respecting football betting lines for this game? We’ll see that next… Duke enters this week’s game with a 4-1 start to the season and a 0-1 record in ACC whereas Georgia Tech is 5-0 and 2-0 in ACC. Though the Yellow Jackets have not been ranked in close to three years and just got back to the top 25 after last week’s victory, they always relish their meetings with Duke because the Blue Devils are winless against them in the last 10 games. Can the Yellow Jackets maintain their admirable 10-game winning streak over Duke and remain undefeated this season or will the Blue Devils get a fifth victory for coach David Cutcliffe? Game and Betting Preview Days before the game, Georgia Teach coach Paul Johnson and Duke coach David Cutcliffe added a little extra to their teams after stating a verbal war. According to Georgia Tech’s coach Paul Johnson, his team is “getting better every week” and winning Saturday’ game is just as important as their previous games. But for the fans and players, the expectations are considerably high. The lots of college betting drama surrounding this game and the invigorated expectations are because a win for the Yellow Jackets will help the team equal the venerable 6-0 record, which was last achieved in 2011. Last week’s star performance by Zach Laskey with 133 rushed yards will be greatly needed this week by the Yellow Jackets. Nationally, the No. 22 Georgia Tech rank 11th in FBS with an average of 297.2 yards on the ground. With Both Laskey and QB Justin Thomas playing spiritedly this season, Duke will have a long afternoon and will need to belabor extensively to contain these two players. Needless to say, the Blue Devils’ defense won’t be easily outplayed. In four of five games this season, the defense has allowed fewer than 20 points. Game Odds: DUKE: +3-105, ML +145 GEORGIA TECH: -3-115, ML -160

Meanwhile, coach Cutcliffe acknowledged that stopping the Yellow Jackets from running the ball won’t be easy, so instead Duke should “slow them down and stop the big explosive play”. With the sweet taste of capturing last year’s ACC Coastal Division championship still fresh in their mouths, the Blue Devils will certainly fight to win Saturday’s game to boost their chances of retaining the championship. Offensively, Duke is full of talented players that can easily inspire a strong offensive play. Nonetheless, if this is to be done, players like Senior Anthony Boone must pull up their socks real quick. Boone has recently been anything but senior for his team—three interceptions and no touchdowns in the last two games after tossing seven TDs in the first three games is simply unacceptable for the quarterback. Prediction Duke’s strong defense will do all they can to keep their team in the game and look for the win, but Georgia Tech’s fast-paced offense will propel the Yellow Jackets to victory. So college football betting fans should keep an eye fixed on Georgia Tech for this one.
Older post
Newer post