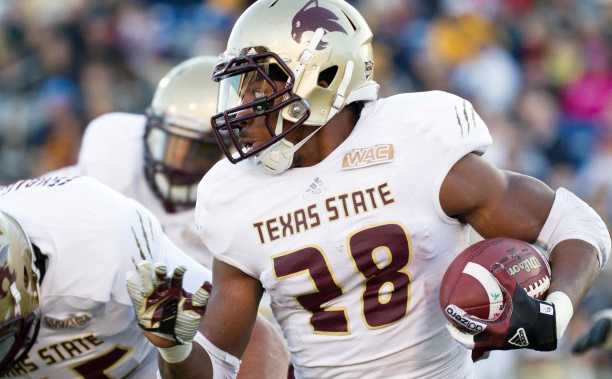 NCAA Football Betting News
Here’s something unusual for betting fans. We don’t often see football being played on a Tuesday night, but that’s exactly what we get this week with a Sun Belt match-up that sees the 2-3 Louisiana-Lafayette Ragin’ Cajuns take a trip to Texas State to take on the 3-2 Bobcats. Now this may not seem as exciting or important as other matches featured in Week 8 calendar, but it provides a great college football betting opportunity early in the week.

The Ragin’ Cajuns are 2-3 this entering Week 8, and the wins that have put together this season have come in the cozy confines of their own stadium. They have had a pair of road game this season against Ole Miss and Boise State that saw them get blown out in both. They lost 56-15 against the Ole Miss Rebels, and slipped a week later 9-34 to the Boise State Broncos.The opposition won’t be quite as stiff in Texas, but despite the unimpressive record and all the issues they face this season, the Texas State Bobcats come in as  2.5-point favorites to beat the Ragin’ Cajun. While they are sure to be on a bit of a high after their win against Georgia State, their inability to cover the spread this season (1-4) is something that can’t be ignored.The Bobcats have developed a habit of playing tight games this season. If you throw out Week 1 56-0 blowout over AK-Pine Bluff, their 4 other games have been decided by a total of just 21 points. They are 2-1 at home this season, and are on a 2-game win streak that is sure to give them a little bit of confidence ahead of this one. Their offensive stats are also a good deal, and way better than that of the Ragin” Cajuns, which is yet another nod in their favor.

There isn’t much to say about these two teams, but my gut says to take the Texas State Bobcats straight up and against the spread in this one, but I think the smarter bet is the total (62.5 points). The Ragin’ Cajuns have seen 3 of their five games go OVER this season, while Texas State has had 4 of the 5 go OVER, with the other being a push. My play here would definitely be on the OVER.
Older post
Newer post