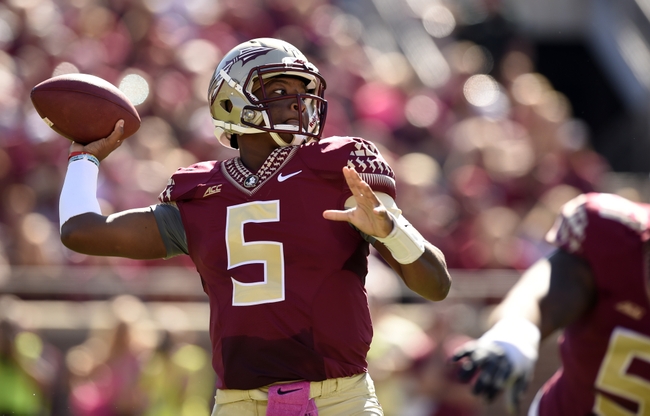 NCAA Football Betting News
Here’s a note for football betting fans: On Monday, the Syracuse Orange announced that starting QB Terrel Hunt will be sidelined for four to six weeks following the broken fibula injury he suffered in the 28-6 loss to Louisville last Friday. This news won’t be well-received by Syracuse whose offensive woes have been evident even when Hunt was still fully fit.On top of the injury news, the school announced that coach Scott Shafer has laid off offensive coordinator George McDonald of his responsibilities for the team. With the availability of Syracuse wide-outs Ashton Broyld and Brisly Estime also yet to confirmed for Saturday’s match up against the undefeated Florida State Seminoles (5-0, 3-0), it goes without saying that the Orange (2-3, 0-1) will need more than luck and hard work to get anything against FSU.

Game: Florida State Seminoles vs. Syracuse OrangeVenue: Carrier DomeDate: Saturday, October 11, 2014Time: 12:00 PM ETOn any other day with Hunt and his fellow injured players available for the Orange, you would expect a few sparks of talent and some competition from the team. But with their key players sidelined or a doubt for the match up, the already tall order of getting a victory is going to be even taller for Syracuse.If Syracuse is looking to limit the Seminoles’ dangerous attack from giving them an embarrassing drubbing (like they did in last season’s 59-3 meltdown), their defensive unit should strive to break plays, force interceptions and avoid giving Florida too much room to move the ball. Game Odds:FLORIDA STATE: -24-110SYRACUSE: +24-110Despite the fact that Florida State is 1-4 ATS, both the North Carolina State and Wake Forest were quite a handful for FSU. The Seminoles rallied from a 17-point deficit to handle the Wolfpack a 56-41 loss. And what about Wake Forest? Well, they didn’t even try, and lost the game 43-3. The main reason behind their fighting spirit was that they approached their games with the intent of playing their best rather than just sitting back and handing a win to Florida because they are ranked top in the nation. If Syracuse Orange goes to the game with the same mentality, may be they can play their hearts out and come out of the game with their heads held high—whether they lose or win.Also, injuries are becoming an issue for No.1 Florida State. A concussion injury for Rashad Greene and broken bone in Austin Barron’s arm/hand means that both players are most likely miss Saturday’s game. But with Jameis Winston enjoying his comeback to the squad, expect a massive amount of points for FSU who will score with utmost ease.

Most bookies and sports bettors would tell you straight up that the game looks almost over (with a big win for the Seminoles) even before it started. Personally, I wouldn’t put it that way, but I’d sure tell you that if you are one of those people who believe in football miracles, don’t expect Syracuse to pull one here because all the football betting odds seem to be against them. Only one team will emerge victorious here and that team is not the Syracuse Orange.
Older post
Newer post