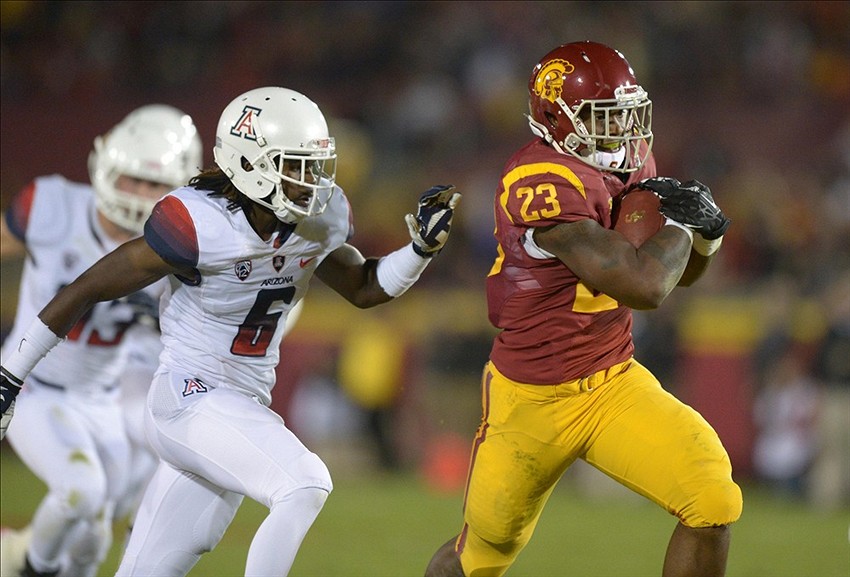 NCAA Football Betting News
If you want the perfect example of two football programs that appear to be going in totally different directions, you need only look at the USC vs. Arizona match-up this coming weekend. What’s odd, given the history of these two programs, is that the team on the decline may not be who you have in mind nor the favorite one in the betting lines for college football.The Tojans are sitting at a very disappointing 3-2 this season, and are still reeling after losing 34-38 to the Arizona State Sun Devils in a game in which they came in as 11.5-point favorites. Their record is all the more baffling when you consider that they have only turned the ball over twice, with both coming in the first game of the season against Fresno State, whilst also having 9 takeaways so far. That sort of ratio usually results in wins, but that hasn’t been the case for USC.

Meanwhile the Arizona Wildcats (5-0, 1st in South Division) are flying high with a #10 ranking and the scalp of the Oregon Ducks under their belts. The stunning 31-24 win against the Ducks in Eugene, Oregon last week was huge, and is somewhat representative of what Arizona has done all season. The Wildcats opened the season with a 13-58 blowout over the UNLV Rebels at home, and eked out victories in the other 4 games on their way to a perfect 5-0 record. In fact, if you toss out that opening week win, you will find that they have won the other 4 games by a combined total of 21 points. They aren’t blowing anyone away, but they are getting the wins, which is what really matters.

Despite the way the season is going for both teams, the Trojans will enter the game installed as a 2.5-point favorite for this one. USC are 1-1 on the road this season, notching a big win at Stanford before suffering a 31-37 loss at Boston College the following week. They are a hard team to figure out, as they have looked great both offensively and defensively in their three wins, scoring a combined total of 100 points, whilst giving up 30 or more points in the two games they have lost.The Trojans have the historical edge against Arizona, and are 14-5 SU in meetings between the two since 1992. Things are even SU and ATS in the two games played in the last three years, with both of those games going OVER the point total. USC are 3-2 ATS this season, while Arizona is 2-3.Game Odds:USC: -2½-110ARIZONA: +2½-110

The point totals are OFF at time of writing, so we can’t really look there. I’ll admit that, despite their record against Arizona, I’m a little surprised to see USC as favorites, no matter how small the spread is at this instance. The crowd is sure to be wild in Arizona as their team comes home on the heels of a huge win. As such, I don’t think there will be a letdown, which is why I like Arizona, and the +2.5 point spread on the Wildcats make them even more attractive entering Week 7 of the college football betting season.
Older post
Newer post