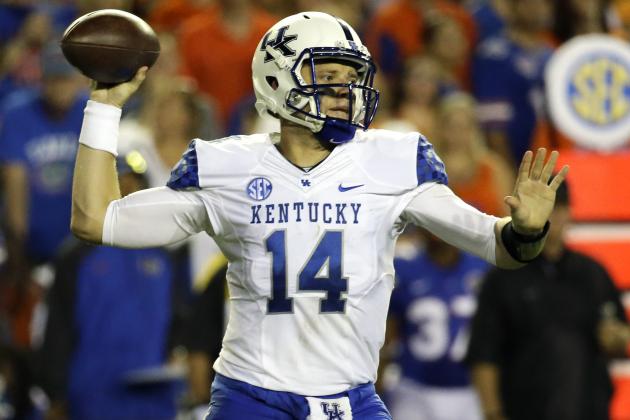 NCAA Football Betting News
After a couple of weeks with major upsets, the race for the postseason still very wide open, and two SEC East teams with an outside shot of making the playoffs will clash this coming weekend in a if they can win their conference will be in action on Saturday. Judging by their records, novice bettors may think that a 5-1 team such as the Kentucky Wildcats have the edge over a 5-2 team like the LSU Tigers, but don’t get fooled or confused here. LSU is always a favorite when playing home, and this time isn’t the exception as they enter the game holding the favorite tag in the college football lines for Week 8.

The Kentucky Wildcats are a surprise team in the SEC East, and are looking for their first winning season since 2009. They are currently 5-1 in the SEC East, and could even have a chance to play in the SEC championship game, if they can win out, and if a few things can go their way, if not, they will still be happy to have a winning season, and make their first bowl game in four years.The LSU Tigers came into the season as one of the favorites to win the SEC West, and make it to the conference championship game, but they lost a close game at home to Mississippi State, and got blown out on the road by Auburn which knocked them out of the top 25, and effectively ended their hopes of playing for the national championship.

Kentucky’s only loss was a 36-30 OT loss to the Florida Gators, and they have won three games in a row since then, including a victory over South Carolina, who were one of the preseason favorites this year, but have struggled recently. Kentucky has a very good defense that is limiting opponents to 18.7 points per game, which is the 15th best defense in the country. Their offense is well balanced, and averages 264 yards through the air, and 184 yards on the ground. They are averaging 36.5 points per game, which is 30th in the nation, and are averaging 46.5 in their last two games.Game Odds:KENTUCKY: +9½-110LSU: -9½-110LSU started the season with a question mark at the quarterback position, and figured they would focus more on their running game to help them win games. It worked for them through the first three games of the season, even though they had some close calls, but by the time they faced Mississippi State, the passing game needed to be addressed, so Les Miles benched starting quarterback Anthony Jennings for freshman Brandon Harris, before the game against Auburn, because he had put up better numbers in limited time. The move didn’t pay off, and Miles had to bench Harris after an ineffective first half, and will likely go with Jennings for the rest of the year. LSU’s chances of making the playoffs are almost over, but they can still play spoiler, because they will host two teams in the top 10 before the season is done.Betting Tips

Sitted at 5-1, the Wildcats have been having a convincing season. However, all they victories have been claimed at home, so playing a team like LSU on the road represents a real challenge for Kansas State, who by the way, have the football betting odds against them. The last time they defeated the Tiger in Baton rouce was 16 years ago, and the score was really tight (39-36). So I really doubt they’ll go on the road and defeat LSU, a team that has won four of the last five games in the series between these two.
Older post
Newer post