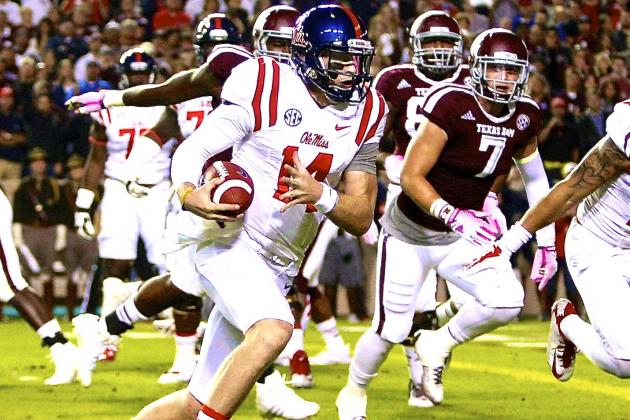 NCAA Football Betting News
Week 7 was another great one for college football betting fans, and was a week that saw the AP rankings get another major shake-up.  Despite the brutal action, upsets and other surprises we saw last weekend, a total of 32 teams remain in playoff contention, and all of a sudden, the best squads in the Southeastern Conference reside in Mississippi, not Alabama or Louisiana. But as you know, that’s what tends to happens when ranked teams go head to head, which is something we have seen a lot of in the past two weeks of the season. As we head for some early action (The first game in Week’s 8 schedule kicks off Tuesday night), it is time to review some of the highlights from the previous week, check the changes in the college football rankings and evaluate the overall winners and losers.The state of Mississippi is the big winner of the week, with a pair of teams now occupying the top 3 spots. Mississippi stole the top ranking away from Florida State by knocking off  the No.2 ranked Auburn Tigers. That came just a week after they beat Alabama, who were also ranked at the same position at the time. What Mississippi State have done is nothing short of amazing, going from unranked at the start of the season to the top spots in the rankings in just 6 games.Ole Miss laid a beating on Texas A&M to move into #3 in this week’s poll. While the can definitely be considered winners for the week, I think it’s fairer to say that the Aggies are one of the biggest losers. Their stock is really starting to fall, and all of the people touting QB Kenny Hill as the next Heisman trophy winner now look to have been completely silence.There was a definite winner and loser in the state of Georgia. The Bulldogs traveled to Missouri after an awful few days that saw them lose their star RB Todd Gurley, as he is under investigation for possible NCAA rules violations. The Bulldogs put all that aside, picking off Mizzou QB Maty Mauk 3 times on the way to a dominating 34-0 blowout win. Gurley’s replacement, Nick Chubb came in a pounded out 154 yards in a fantastic display.Things were not so bright for another Georgia team: The Georgia Tech Yellow Jackets. They had finally managed to become ranked after starting the season 5-0, but a dose of reality check by the Blue Devils left them empty handed. The Tech fans came into the weekend game against Duke on a real high, but left on a low after falling 25-31 and back out of the Top 25.Perhaps the most surprising (and somehow ridiculous) game of Week 7 was played between the Baylor Bears and the TCU Horned Frogs. We all knew for sure that both squads were going to put up lots of points, but what we got was that, plus a comeback for the ages. TCU looked to have things wrapped up in the 4th quarter, but Baylor were able to rattle off 24 points in the final 11 minutes of the match to post a 61-58 win. An unbelievable game with a truly unforgettable finish.