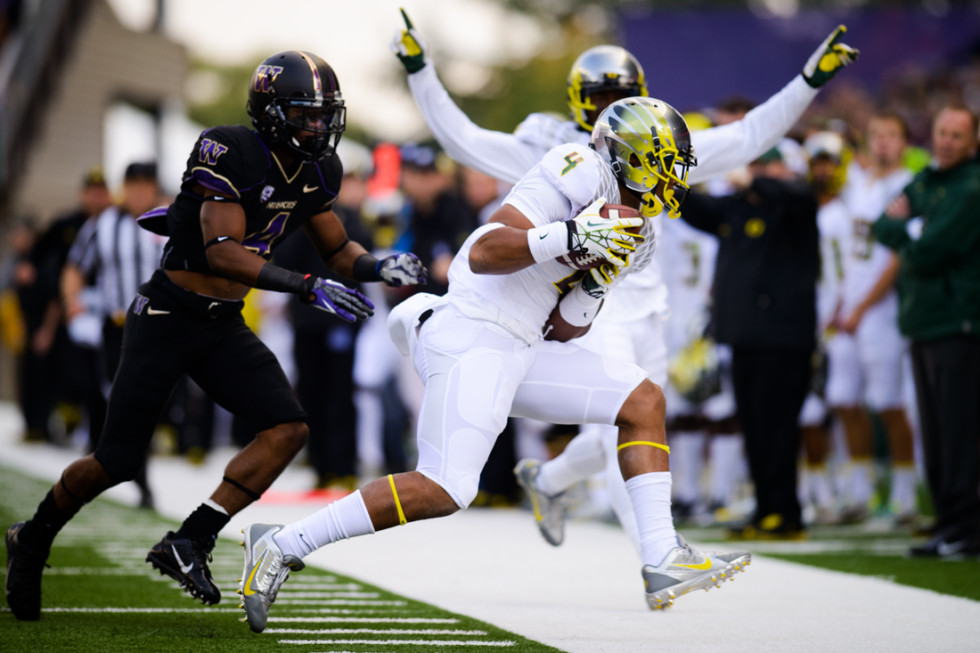 NCAA Football Betting News
Another great slate of games are scheduled in college football this coming weekend, and there is one that has the potential to shake things up in the North Division of the Pac-12 conference. It’s no real surprise to anyone that the Oregon Ducks are on top with a 5-1 record, but that could all change if they slip up at home against the Washington Huskies this Saturday night. Despite that both teams enter the game with an equal record of one lose and five wins, the Ducks area heavy favorites in the football game odds, listed as double digit to win this match.

The Ducks have, as expected, been able to put big offensive numbers on the board, but that has often been matched by some porous defense. When going against decent opponents this season, the Ducks have given up 30-plus points each time, which does not bode well for this weekend against Washington. We will get into the point spread a little later in the piece, but there is a definite trend that the Ducks are showing this season that could be a key on how to play this game. Washington head into Eugene, Oregon with the same 5-1 record as the Ducks, but their conference record of 1-1 sees them sit below Stanford and Cal in the North Division. An upset win this weekend could potentially take them to the top of the conference. They have certainly proven capable of putting points on the board, with their lowest tally of the season being 24 points, which came in their lone loss of the season at home to the Arizona Wildcats. That said, they have given up 30points or more in their last three outings, which is a rather scary stat when getting ready to take on Oregon.

There’s a bit of bad blood between these two PAC-12 rivals. The Ducks have won the last 10 games against the Huskies, and in eight of those losses, UW has failed to score more than 21 points, so there’s a reason why the Ducks are expected to win by such a large margin. Oregon has been installed as a 21-point favorite, and it’s fair to say that they have underwhelmed against the spread so far this season. They are 2-4 ATS, with both of the wins coming when the spread was set relatively low. Washington is 3-3 ATS, and seem to do well when they come in as the underdog. Oregon is 2-0 SU and ATS in meetings with Washington over the past 3 seasons. The point total is OFF at the time of writing. Game Odds: Game Odds: WASHINGTON:+21-110 OREGON:-21-110 I mentioned an interesting little trend concerning Oregon and the spread this season. In games where they have been favored by 21 points or more, they are 0-3 ATS. Combine that with how well Washington has performed ATS as underdogs and you come up with the Huskies to cover. I like Oregon straight up, but by 2 TD’s at best. Forget about the football betting spread, keep an eye on the point total, as both teams are a combined 9-2 on the UNDER this season.
Older post
Newer post