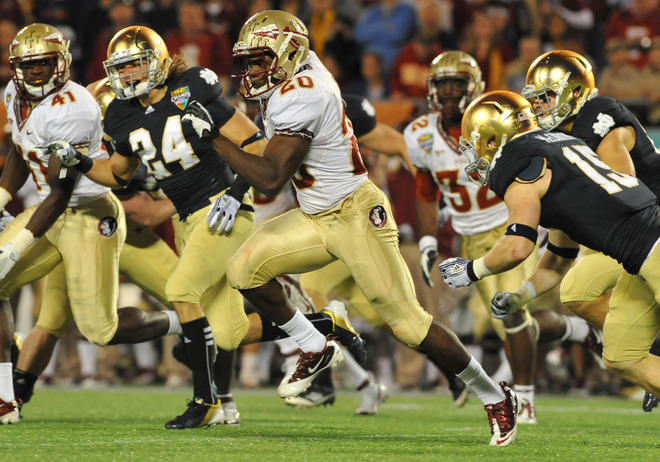 NCAA Football Betting News
The 2014 NCAA football season has been very unpredictable so far, and if the trend continues, it will make things difficult for the selection committee that have to decide which four teams will get a chance to play in the playoffs. After another week of upsets, it is time to figure out which three teams were winners, and which three teams were the losers this week. So here are the Top 3 winners and losers plus the updated college football rankings for Week 9.

Florida State: The second ranked Seminoles won their highly anticipated game against fifth ranked Notre Dame, it was a close game that went down to the final seconds, so the Seminoles could not get back their #1 ranking from Mississippi State, but it was a win over a top 5 team, so it helped them solidify their #2 position in the rankings. The Seminoles don’t have any more games against ranked teams, and should be able to run the table and finish the season undefeated, which should get them in the playoffs. Alabama: The Crimson Tide were in danger of missing the playoffs after losing to Ole Miss two weeks ago, and dropped to #7 in the rankings. They won their next two games after the loss, including their 59-0 shutout of Texas A&M on Saturday, and fourth ranked Baylor lost to twelfth ranked TCU, helping Alabama climb to #4 in the ranking. Notre Dame: Due to the fact that they played a very close game against the Seminoles, the Fighting Irish only fell two spots to #7, and are still in the playoff race. They still have two games against ranked teams, and can move back into the top 5 if they win out, and a couple of teams ahead of them stumble, which is very likely.

Baylor: The Bears blew a big chance to earn a playoff spot when they lost to West Virginia on Saturday. The reverse against the Mountaineers dropped the Bears to #12 in the rankings, and they will need to win the rest of their games and hope for a lot of teams ahead of them to lose to have a chance of competing for the national championship. Oklahoma: The Sooners suffered their first loss of the season two weeks ago against TCU, but still had a chance to climb back in the rankings because they still had a couple of games against ranked teams. Their loss to Kansas State eliminated any chances they had, because they are now ranked #17 in the country. Oklahoma State: The Cowboys had an outside chance of making it to the playoffs if they could win the rest of their games this season, because they had five games against ranked teams, which would have put them in the top 5, the loss to TCU eliminated those chances, because they fell out of the top 25 rankings