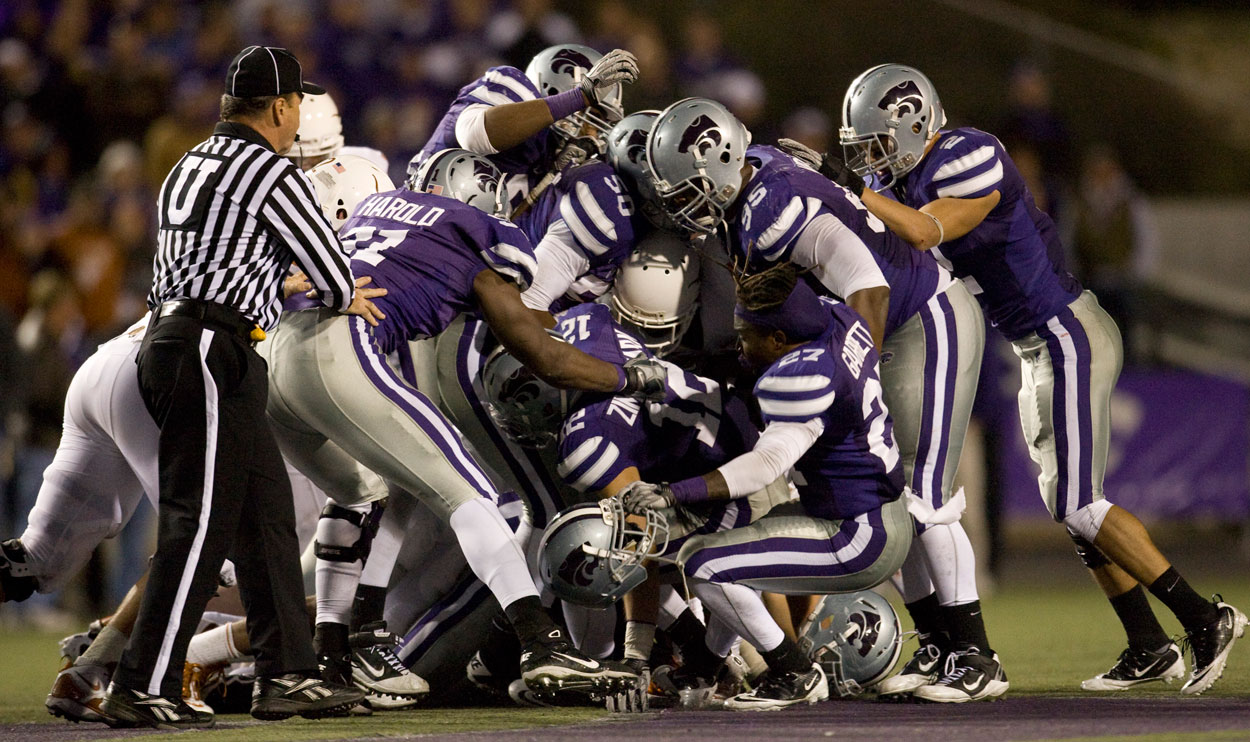 NCAA Football Betting News
After getting a narrow, but hugely-important 31-30 win over the Oklahoma Sooners last week, the Kansas State Wildcats will be hoping for another victory over their Big 12 rivals, the Texas Longhorns. In last week’s match, the Longhorns ended their two-game losing skid with an entertaining 48-45 take-down of Iowa. Can Texas keep its unbeaten Big 12 record and boost its chances of coming atop of the conference or will the Longhorns play spoilers to the Wildcats’ championship aspirations? Read on for a football game preview of this matchup.Matchup DetailsGame: Texas Longhorns (3-4, 2-2 Big 12) vs. Kansas State Wildcats (5-1, 3-0 Big 12)Venue: Bill Snyder Family Stadium (Manhattan, Kansas)Date: Saturday, Oct. 25, 2014Time: 12 M ETTelevision: ESPNSeries Record: Kansas State leads 8-6, with a dominant 4-1 record in the last five gamesLast Meeting: Texas won 31-21 in September 2013

The Bill Snyder Family Stadium has been a formidable fortress for the Wildcats who are 4-1 ATS in their last five home games this season. In the series of games against the Longhorns, the home record is even better with Texas winning all but one game. Nevertheless, the Longhorns’ 4-2 ATS in their last six road games is good enough to motivate the team to look for an away-from-home victory.Against Iowa State, Texas QB Tyrone Swoopes was the hero of the day as he rushed for 95 yards and a TD while he also passed for 321 yards. In addition, Swoopes threw two long passes to John Harris and Jaxon Shipley to help set up Nick Rose’s last-gasp field goal that won the game with just three seconds left on the clock. If the quarterback can bring his game-winning inspiration to Saturday’s game, the Longhorns will definitely have a shot at out-passing Kansas defense that is allowing 251.17 passing yards per game.Game Odds:TEXAS: +10-110, ML +300KANSAS STATE: -10-110, ML -360Comparably, the Longhorns are allowing 163.86 passing yards per game (a better record than Texas), but are weaker in defending rush yards (allowing 182.43 rushing yards compared to Kansas’ 100.83 average per game). For this reason, Kansas can take advantage of its strong rushing game, combining QB Jake Walter’s strong arms and legs with WR Tyler Lockett pace to run down Texas’ rather weak rush defense. In last week’s victory over Oklahoma, Walters completed 15 of 23 passes for 225 yards and scored two touchdowns. With his consistency this season, the Wildcats can count on him to be their main man and hopefully lead them to victory.Texas’ wide receivers Shipley and Harris have been amazing over the recent games, averaging 103.5 and 118.5 receiving yards respectively in their last two games. You can therefore expect them to link up well with Swoopes and cause trouble with their strong passing game. However, the Walters-Locket combination will prove too hot to handle and superior, hence leading Kansas to a sixth win of the season.
Older post
Newer post