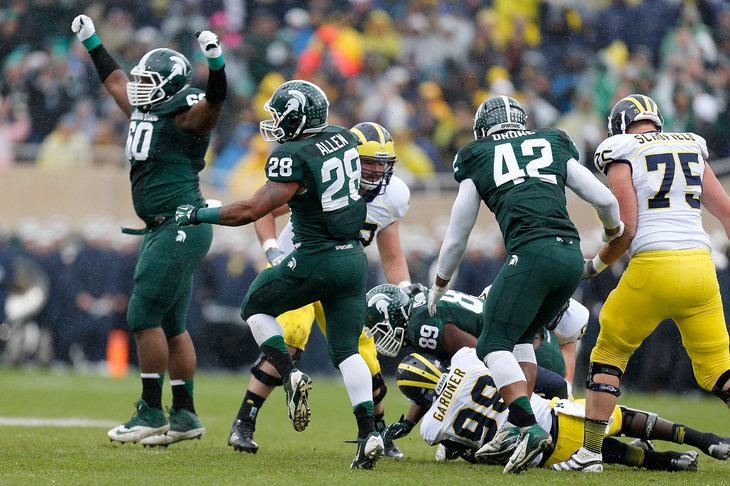 NCAA Football Betting News
This coming Saturday, football fans will have a chance to get a taste of the long-standing Michigan rivalry when the Michigan State Spartans (6-1, 3-0 Big Ten) host their bitter foes, the Michigan Wolverines (3-4, 1-2 Big Ten). To add fuel to the derby that is usually fiery irrespective of the stakes, Wolverines’ coach Brady Hoke is sprightly fighting for his job at Michigan. A loss by Michigan would serve Hoke all juicy to the many critics dying to have a bite of him and his career. As a result, this would probably condemn the under-fire coach to his highly prophesied sacking. Meanwhile, the Spartans have all eyes on the national championship playoffs and a show-off win would go a long way in catching the eyes of the playoffs committee.With the Michigan bragging rights and the off-plus-on-field issues on the line, which of the two teams is most likely to come out the weekend celebrating victoriously? See the section below for a concise game and check the football lines and betting preview of this matchup.The Matchup at a Glance!Game: Michigan Wolverines vs. Michigan State SpartansVenue: Spartan Stadium (East Lansing, Michigan)Date: Saturday, Oct. 18, 2014Time: 3:30 PM ETTelevision: ABCSeries Record: The Wolverines lead the series by a 35-24-2 record. However, the Spartans have been recently dominant, winning five of their last six meetings with Michigan.Last Matchup: The Spartans handed the Wolverines a 29-6 thrashing in November 2013Betting and Game AnalysisIn the 29-6 win by the Spartans last season, the Wolverines were limited to minus-48 rush yards, which was the lowest total in Michigan’s history. Since then, the Wolverines swore to revenge against Michigan State and have been preparing hard for this weekend’s fixture. Unfortunately for the Wolverines, the Spartans have been in a blistering form this season, losing just one game, so defeating them won’t be easy. Furthermore, a 4-1 ATS and a 5-0 SU record in the team’s last five home games is evidence of how the Spartan Stadium has been a fortress for Michigan State.Nevertheless, there is hope for the Wolverines, going by the Spartans recent trends and their game tactics. For example, despite beating Indiana 56-17, the Spartans started that game slowly trailing in the second quarter, before coming back strongly. Michigan can take advantage of this slow start, which has also been witnessed in other games, by firing on all cylinders immediately they start playing. Also, Oregon showed that some quick passes can help outwit the Spartans. By capitalizing on a talented athlete like Michigan’s QB Devin Gardner, the Wolverines’ receivers and runners can accentuate their ball passing and running game, thus causing trouble to Michigan State’s secondary.Game Odds:MICHIGAN: +17-110MICHIGAN STATE: -17-110With an offense currently ranked 12th nationally, it goes without saying that the Spartans’ offense this year is much better than last year’s. But even with such an offense at their disposal, there will be need to pressure Gardner into making mistakes while using their special teams to force turnovers. Also, there is need to have a more solid throwing-the-ball game, or else Michigan’s good defensive play will frustrate the efforts of QB Connor Cook and WR Tony Lippett in making rhythmic offensive ball movement.PredictionThe Wolverines will do everything to win and hand their fast-sinking coach a lifeline. However, with the playoffs in their mind, the Spartans will go all-guns-blazing with their deadly offense and claim an important victory in front of their home supporters.
Older post
Newer post