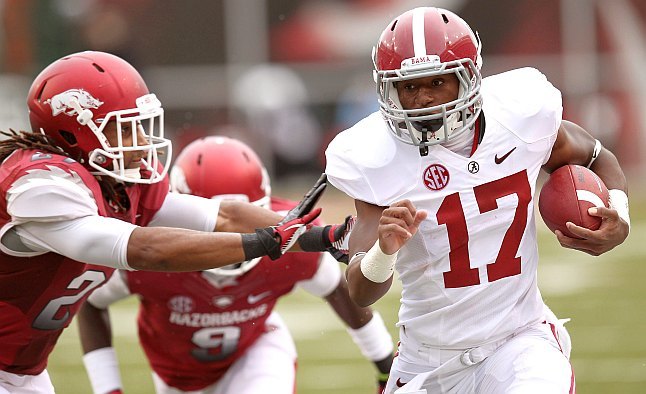 NCAA Football Betting News
There were plenty of upsets in the top 25 college football rankings this past weekend, which put a wrench in the plans of some of the teams hoping to make the playoffs, one of the teams that was upset last week was then #3. Alabama Crimson Tide, who lost to the Ole Miss Rebels and have dropped down to #7. Despite the loss they still have a chance of making the playoffs, but cannot afford any more upsets in the coming weeks. They need to get back on track, and that means that they will go for a win when they visit the Arkansas Razorbacks on Week 7 of college football.
Saturday, October 11, 6:00 PM, Reynolds Razorback Stadium, Fayetteville, Arkansas
Alabama couldn’t ask for a better team to play after the tough loss they suffered against Ole Miss. They have won 6 straight games against the Razorbacks, and won the last two games by a combined score of 104-0. A win against Arkansas will give them some much needed confidence heading into their game against Texas A&M in two weeks.Despite the fact that Arkansas is dragging a 0-14 record in SEC play, the Razorbacks are doing better than expected this season. They are 3-2 overall and  2-0 in SEC play, with losses coming to Auburn in the season opening and an OT loss against then #6 Texas A&M in their last game. They will try to do something they haven’t done since 2007, which is to defeat Alabama.

Alabama had not faced a real test this season until the game vs. Ole Miss on Saturday, which ended in a 17-23 loss. The Tide defeated the 3-0 Florida Gators on Week 4, but a lot of people are still skeptical about just how good Florida is. The game against Ole Miss is the only road game they have against a ranked team this season, and should be able to do better when they face the remaining ranked teams on their schedule at home.Alabama should be able to throw the ball against the Razorbacks, who allow 263 passing yards per game, and will have their hands full with the Crimson Tide running game, which accounts for 237 yards per game.Arkansas is 0-2 in conference play, with their two games coming against the #6 team in the country at the time. They were blown out on the road in their first game of the season against Auburn, but played a very tough game that went into overtime against Texas A&M. The Razorbacks have had a lot of success on the ground, and are averaging 316.6 yards per game, if they can get their ground game going against the Crimson Tide, they will have a chance to pull off the upset, because it will allow them to exploit Alabama’s pass defense, which has allowed some big plays this season.Game Odds:ALABAMA: -9½-110ARKANSAS: +9½-110Trends:

Arkansas played a great game against the Aggies, but Nick Saban will not allow his team to lose two games in a row. If the do so, then they will be eliminated from the playoff contention early in the season. The team isn’t even among the top squads in the NCAA Football rankings, but failing to enter the college football playoffs will be a great disappointment for the program, especially when they have a relatively easy schedule the rest of the way. Unfortunately for Razorback fans, things don’t seem good for Arkansas, especially when they go head to head against conference rivals, so expect another blowout by Alabama in this game.
Older post
Newer post