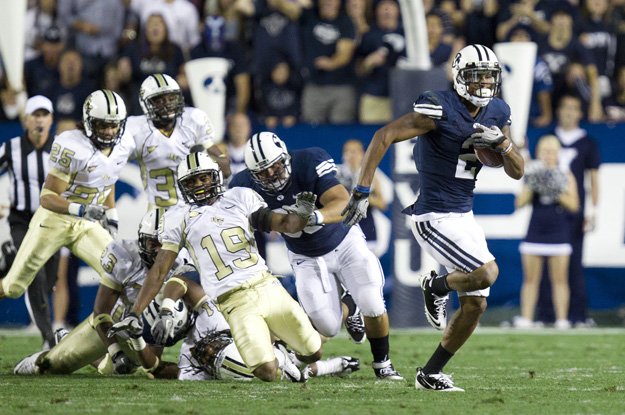 The year-long leg injury sustained by BYU’s quarterback Taysom Hill in his team’s 35-20 loss to Utah State is certainly a big blow to the Cougars who have greatly benefited from the QB’s stellar start to the season. As a result of this injury, the college football betting odds for the Cougars have taken a major hit. It is no wonder BYU’s status has changed from large favorites to being regarded by some football analysts as underdogs as they prepare to meet the Central Florida Knights on Thursday Night.

But even with the underdog status, the Cougars have a 4-1 start to the season in comparison to the Knights who have a 2-2 record. Additionally, CFU is 1-1 at home while BYU is 2-0 away from home. The Cougars will therefore not be easy to play when they face off the Knights at their own backyard in the Bright House Networks Stadium.

So far, the Cougars are 2-3 ATS in 2014. Interestingly, both covers came in their first two games on the road. However, the team was unsuccessful in covering the large point spreads favored to them each week. On the flip side, the 2-2 ATS of the Central Florida Knights is rather average, so it remains to be seen how they fare on in this week’s college betting odds and lines.

A 35-20 loss to Utah State last week means that BYU will be seeking to rebound to winning ways. Meanwhile, UCF is coming off a 17-12 win against Houston last Thursday, hence will be immensely motivated to get another win. The stakes for a Knights’ win is further heightened by the fact that the previous meeting between the two teams ended in BYU’s favor. This week’s contest will be the second ever match up between the Cougars and the Knights. The first meeting was in 2011 and BYU edged off UCF 24-17.

With Hill missing for the Cougars and the team having to deal with a few other injuries, there will be need for inspiration and hard work from the whole team. It is only by doing so that they will be able to bounce back from last week’s defeat. For the Knights, the decent seasonal starts by RB William Stanback, WR Breshad Perriman and QB Justin Holman shows that they can be game-changers on any given day. A few tactical tweaks in the defense as well as the offense and the Knights could steal a victory against BYU.

Hill’s absence will be hugely felt, as was the case last week. After his second quarter injury, Hill’s replacement Christian Stewart completed just 10 of 29 passes and threw three interceptions. A lot of work is therefore needed for the replacement QB and the Knights could take advantage of that, win the game and cover the 3.5-point college football spread. However, BYU’s superior offense (solid passing and rush yards game) when compared to the Knights, will pilot the Cougars to a hard-earned victory.