NCAA Football Betting News
When Paxton Lynch first came out for football in 2012, he stood 6’7” but weighed only 215 pounds, looking something like a small forward who went the wrong way out of the locker room, until he threw his first pass. That year, he was the third-string signal-caller for the University of Memphis, and it looked like he was going to redshirt just like any other NCAAF betting fan would’ve thought.

In just three short years, the Memphis Tigers have turned around their football program. http://t.co/tk4RJjbDpL pic.twitter.com/LhEPw7KSLB

Most of the major colleges had passed on him because of a knee ailment that stopped his senior season from happening. Lynch had signed a commitment to Memphis even though the coaches had never even seen him throw a pass live. They had seen his highlight tape, but that was it. When he threw a comeback route perfectly, his head coach, Justin Fuente, knew that they had a keeper.When Lynch came to Memphis, it was the first time he had a position coach. It was also the first time he played in an offense that featured the pass. His high school had run the wing-T offense, which focuses on quarterback fakes and handoffs. He taught himself to throw the football like a baseball because he also played baseball.Now, with 30 starts under his belt and with 30 pounds of muscle added on, he looks back on his development with some perspective. He told CampusRush.com, “I guess it’s natural ability” before shrugging. However, it also had to do with all that competition with Evin, his older brother, who pitches for Stetson University. Evin tells CampusRush.com that the brothers have always had similar arm strength, but Paxton’s accomplishments are more than just arm strength. Through the first five games of 2015, Lynch has a completion percentage of 70.5 with 1,535 yards in the air – as well as 116 on the ground. He has thrown 10 touchdowns with no interceptions. His overall passer rating (181.5) is fifth in the nation among FBS quarterbacks. With Memphis entering the spotlight with a showdown against #13 Ole Miss this weekend, Lynch is now the talk of the nation, and he is appearing on draft boards for the 2016 NFL entry. 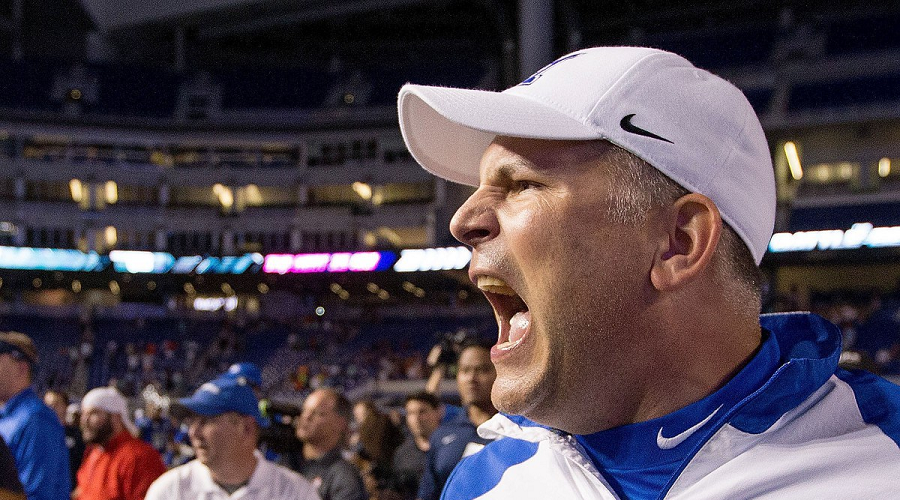 Head coach Justin Fuente is in his fourth season driving the Memphis Tigers. When he came to the school, the Tigers had not been in a bowl game since 2008. In 2009, 2010 and 2011, they won a total of five games. Former Memphis running back Larry Porter had been coaching the team, but his 3-24 combined record saw him go out the door. If Memphis was going to make the jump to one of the Power Five conferences, the school needed a good football team. Fuente had been at TCU, first as the running backs coach and then as the co-offensive coordinator.Fuente watched Gary Patterson build the Horned Frogs up in the Mountain West and then bring them into the Big 12, and he wanted to accomplish the same things at Memphis. He was a key mentor for Andy Dalton, who is now finally coming into his own with the Cincinnati Bengals, and Fuente wanted to find a high-level quarterback as the basis for his offense. And that’s how he came upon Paxton Lynch. It will be interesting to see if Lynch and the Tigers can deliver against Ole Miss.
Older post
Newer post