NCAA Football Betting News
The Ohio State Buckeyes, Wisconsin Badgers and Michigan State Spartans have been the cream of the Big 10 conference, and going by the offseason developments in the conference, the dominance will continue in 2015. Even so, every year, the world of NCAAF betting presents with teams that upset the NCAA Football odds and we expect this year to be no different. With that in mind, here are the reasons we believe the Gophers are worthy of consideration in the odds to win the 2015 Big 10 title:

Coming off an 8-5 (5-3 Big 10) record, 2014 Big Ten coach of the year Jerry Kill and his boys are understandably expected to have another good season, probably making a run for the Big 10 West and conference title. The Gophers will however have to replace the loss of two great offensive players in running back David Cobb and tight end Maxx Williams, who were a crucial reason behind Minnesota’s strong contention in 2014. Still, the Gophers have a serviceable returning quarterback in QB Mitch Leidner (second-leading rusher in the team last year), which should help the team continue its strong running game.

Though the Gophers will have to work their tails off to have a successful season in the NCAA,there is a good chance that, with a bit of some hard work, things could work advantageously for them. Undeniably, playing Nebraska (at home), Michigan (at home), Ohio State (on the road) and Wisconsin (at home) in 2015 means that Minnesota won’t be having it easy in the conference schedule. But then again, the majority of the above games will be played in Minnesota’s backyard at the TCF Bank Stadium, so I’d say the Gophers could be able to take care of all the above games, probably with the exception of the games against the Buckeyes. In short, a 7-1 conference record is possible for the Badgers. 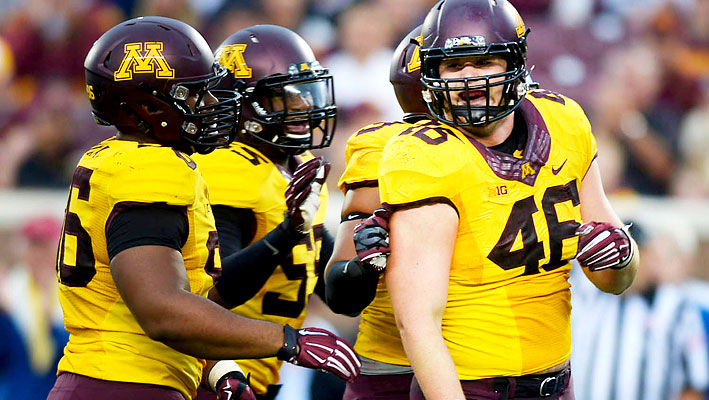 Outside the season-opener against TCU (at home), the Gophers have a soft non-conference schedule, which should see them go 3-1 (assuming they will be losing to the Frogs). Combining their numbers from conference and non-conference play, a 10-2 record should be in the offing for the Gophers.

Last year, Minnesota was one win against Wisconsin away from playing in the conference championship, so the possibility of another good showing should certainly be possible. They probably won’t blow out teams, or even struggle that much against big teams, but they should be able to use their strong running game to tire out teams and claim enough wins. As per our predicted win-total, the 10-2 mark may not get the Gophers into the Rose Bowl, but it’d sure be a step in the right direction, probably enough to win the West and book them a place in the conference title game.
Older post
Newer post