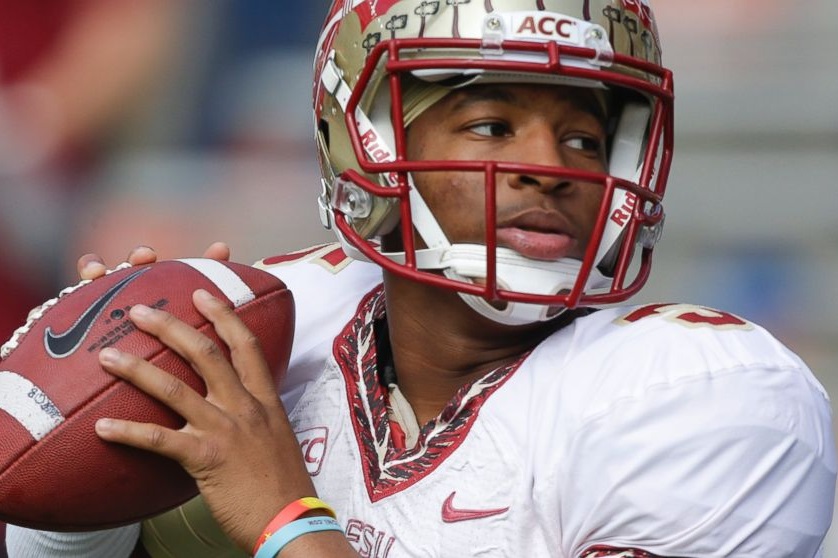 NCAA Football Betting News
In case you been sleeping under a rock lately, Florida State quarterback Jameis Winston has been suspended for the first half of this weekend’s game vs. the Clemson Tigers after making offensive and vulgar” comments about female anatomy. For the No.1 team in the nation, losing their starting QB for the entire first half of a key division game would impact on the college football odds to win the game or even the first college football championship; after all the Seminoles have championship aspirations and one loss could keep them out of the championship. But despite the announcement that Winston is out and that red shirt sophomore Sean Maguire has been called to start as quarterback for Florida State, the Seminoles continue as 14.5 favorite to beat Clemson. So I guess that answers the question regarding Florida’s odds and chances to win this game.

Now, Sean Maguire’s debut is something I won’t miss. After entering in the third quarter of the Seminole’s game against the Citadel Bulldogs two weeks ago, Maguire managed to complete 3 of 5 passes for 28 yards. Yes, the numbers are not awe-inspiring, but the fact Coach Jimbo Fisher has entrusted him to start in the place of reigning Heisman Trophy-winning QB Jameis Winston is a pretty big deal. Speaking about starting his college career in front of the national television with glaring admiration from many people across the world, Maguire is eager to get the starting job, at least for this game. “’I’ve pictured this since I started playing little league ball, and even though it may be nerve-racking. It’s going to be pretty awesome, I’d like to imagine”, he enthused. On his part, Coach Fisher ruminated “Any guy who’s going to play his first game, I don’t care who he is. … I’m anxious to see how he handles it. The Seminoles coach further said, despite the challenge and pressure that would come with the game, he was confident that Maguire would “do well”. Besides his hard work and typical endearing nature, Maguire’s promotion to a first team start in the big boys’ league is partly due to Winston’s disciplinary issues. As has been widely reported all over the internet, Wilson uttered “offensive and vulgar” comments about the female anatomy. Essentially, it is because of the comments that the player was benched on Saturday during the Atlantic Coast Conference showdown.

What’s next for Jameis Winston?

According to the Seminoles, Fisher could decide to keep out Winston from playing more games, despite the player’s recent apologies. Though the team’s championship aspirations in the College Football Playoff and the ACC championship game riskily hang in the balance with Winston’s absence, holding him longer out of the game could be a blessing in disguise for Maguire since he will get more playing time. Plus, with Maguire, the Seminoles have a young, fast and quick-thinking individual who is hungry to prove himself and, for many analysts, that is a recipe good enough to catapult him into efficiency and stardom. Amongst the many things he brings to the table, Sean Maguire “has an extremely strong arm, [throws a] very accurate ball, has good pocket presence” and has maturity that endows him with great mental strength, said Coach Fisher. So, even though it would be overambitious to expect a whole legendary chapter to be written by Maguire in Tallahassee on Saturday, you can presume the player to show a few sparks of brilliance that could someday culminate in a great college football career.
Older post
Newer post