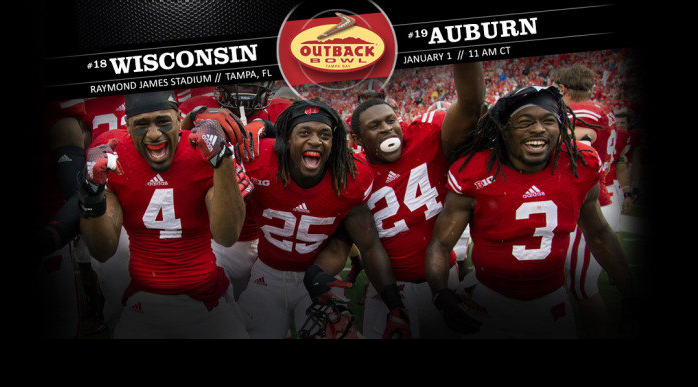 NCAA Football Betting News
What better way to ring in the New Year than curing your hangover with a great selection of Bowl Games and NCAAF Betting options on January 1st? The big playoff games come later in the day, but before all that goes down there are three other games to choose from. The early game is a good one, as it features Wisconsin and Auburn in what looks to be a pretty mouthwatering match-up.

How To Bet the Badgers vs. Tigers 2014 Outback Bowl Odds & Game Info

Why Bet on the Auburn Tigers

Coming into the season, much of the talk was about how lucky Auburn was to get to the National Championship game the year before. The general consensus was that their bubble would burst pretty quickly this season. For a while, though, it looked as though Auburn was once again going to be a contender. That all came crashing down in the final weeks of the season, with the Tigers eventually losing 3 of their last 4. Their goal with this game will be to silence some of the naysayers who are now yelling “I told you so!!”

Wisconsin closed out the season in great form, but they ended up running into a brick wall in the form of Ohio State in the Big 10 Championship Game. That 0-59 loss is sure to still be sticking in the craw of the Badgers, especially when they think about how their run game, which had been brilliant all year, was shut down. Melvin Gordon was a legitimate Heisman candidate for Wisconsin, but even he could do nothing against a Buckeyes defense that stood tall all day. He may have a bit more joy against Auburn, though, as the Tigers have been a little susceptible to the run.

The SEC get the nod once again, as Auburn are in as 6.5-point favorites for this one. The Tigers were not very good ATS this past season, going 4-8. They were also 1-3 versus non-conference opponents, as well as being 2-5 ATS versus teams with winning records. Wisconsin did not fare much better ATS, as they went 5-8, which included being 1-3 ATS when playing teams from out of conference. They were only the underdog once all season, but they failed to cover in that game, too.Wisconsin does not have a good record in bowl games in recent years, and the general feeling is that they are overmatched here. That said, you have to ask what Auburn can do to so the Wisconsin run game. Winning the ground battle should help keep the Badgers close, and while I believe they will lose, they will keep it close enough to cover.
Older post
Newer post