NCAA Football Betting News
This college football article will focus on Braxton Miller who announced a couple weeks ago surprised NCAAF betting fans after announcing that he was going to ease the logjam at quarterback at Ohio State by moving to wide receiver. That means that there are only two quarterbacks on the team now with NFL-caliber arms: Cardale Jones and J.T. Barrett. Miller’s shoulder has not yet healed to the point that he can pass, so he is moving out to catch passes for now.

Can Braxton Miller Make It Without Impacting his Team’s Betting Odds?

As you can imagine, there is a lot of hype around this decision, as many people think that Miller will step in and play wide receiver seamlessly for the Buckeyes. However, there is one person who may tap the brakes on the dream lineup – and that person is Urban Meyer, the coach of the Buckeyes. At the B1G media days, the media asked Meyer to compare Braxton Miller to Percy Harvin, perhaps the most talented wide receiver that Meyer ever coached at Florida, and Meyer was fairly blunt in his assessment, saying that Miller has “a long way to go at that position.” He did compliment Miller on his athleticism, saying that he was up there with Harvin in terms of being a dynamic athlete.   It is this comparison that has Buckeye fans enthused about the effect that Miller’s change could have on the Buckeyes’ fortunes. After all, it makes sense to have two solid options at quarterback, it doesn’t make sense to have three athletes at that talent level tied up in one position. And if there was one of the three to move, it made sense to move Miller, even without the injury. Barrett has better accuracy, and Jones has a stronger arm. However, Miller was the starter for three seasons, and he worked magic with the ball in his hands. In three years, he ran for 3,054 yards and scored 32 rushing touchdowns. But what of the need to establish a passing game? Both Jones and Barrett are better options, especially with Miller’s shoulder still healing from last year’s injury. The best case scenario involves Miller integrating well into the Buckeye offense, making their receiving corps even stronger. The worst case, of course, is that he struggles with routes and with the different routines as a receiver. However, he started practicing at this position secretly back in the spring, coming out to the practice field in the middle of the night, when reporters weren’t around. He has sat with Coach Meyer and watched film of some of the most gifted receivers in the history of football. With the gifts that Miller brings to the table, it’s highly unlikely that the worst case scenario would come to pass. 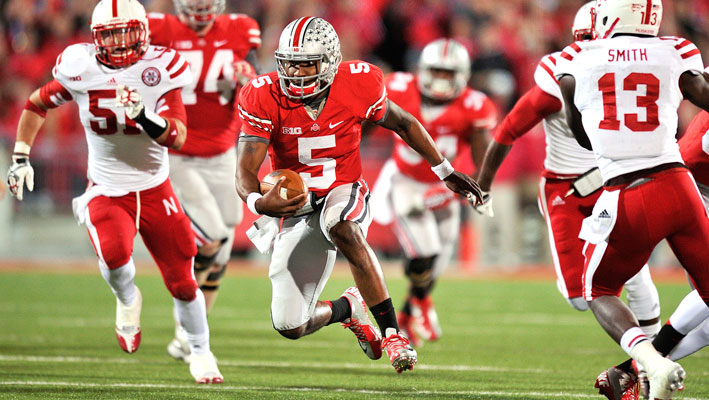 Of course, when Miller’s shoulder does heal, if something happens to Barrett or Jones over the course of the season, then Miller can get back on the depth chart at quarterback. This is the sort of problem that any head coach would love to have – too many Division I-level starting quarterbacks on the roster, and one who is willing to slide over and play wide receiver. When you play for a national champion and have an excellent shot at repeating, though, you’re willing to make sacrifices to win.
Older post
Newer post