NFL News and Rumors
After falling off the title-contending pace they set for the previous three seasons under former head coach Jim Harbaugh, I believe the San Francisco 49ers are heading into the 2015 NFL regular season with a couple of simple questions they need to answer.First, can the Niners get back to being a legitimate Super Bowl title contender next season and second, how do they get quarterback Colin Kaepernick back to playing like the franchise quarterback he looked like in 2012 and 2013?Thanks to this expert Super Bowl odds analysis on the Niners and their chances of cashing in on their Super Bowl 50 Futures, you’ll have a great idea of whether Frisco will find suitable answers to those two questions and much more.

The 49ers (8-8 SU, 6-9-1 ATS, 5-11 O/U) had their share of drama and turmoil in 2014, but they also had some good things happen for them along the way. The 49ers ranked a fantastic fourth in rushing as veteran running back Frank Gore topped the 1,000-yard plateau by finishing ninth in the league with 1,106 yards. Along the way, guard Mike Iupati earned the team’s only Pro Bowl berth.San Francisco also fielded a spectacular defense that ranked fifth overall, fifth against the pass (220.7 ypg) and an impressive seventh against the run (100.8 ypg).

Well, unlike the previous three seasons when there wasn’t much bad to speak of at all, San Francisco had their fair share of ‘bad’ and then some in 2014.The Niners ranked just 21st in total offense, thanks to their dismal, 30th-ranked passing attack (191.4 ypg). The Niners also ranked just 25th in scoring, averaging a mediocre 19.1 points per game.Quarterback Colin Kaepernick regressed in a big way with his passing, finishing 17th in passing yards (3,369) while throwing just19 TD passes and 10 interceptions.The Niners finished 10th in points allowed, but even that was a step down from the top five defensive units they fielded in each of the three previous seasons.

Frisco’s passing attack was downright anemic at times, like when Kaepernick tossed four interceptions and just two touchdown passes during a four-game losing streak from Weeks 13-16.

Let’s take a look at San Francisco’s statistics from this past season.

While veteran wide receiver Anquan Boldin has a fine season in racking up over 1,000 receiving yards, the fact of the matter is that Boldin has really beaten Father Time for a while now and is almost certainly heading toward a decline at 34 years of age.The team’s other starting wideout, veteran Michael Crabtree has clearly lost some explosiveness after tearing his Achilles in 2013. Crabtree is sure-handed but has lost the ability to consistently separate from opposing defensive backs. The 49ers need a big, speedy receiver that can make plays in traffic and in the red zone when Boldin is covered.

Vernon Davis not going to play forever people. As a matter of fact, I say, if the Niners were smart, they’d really start giving more playing time to backup Garrett Celek with Davis coming off a campaign in which he missed two games and caught just 26 passes for a paltry 245 yards and just two touchdowns. 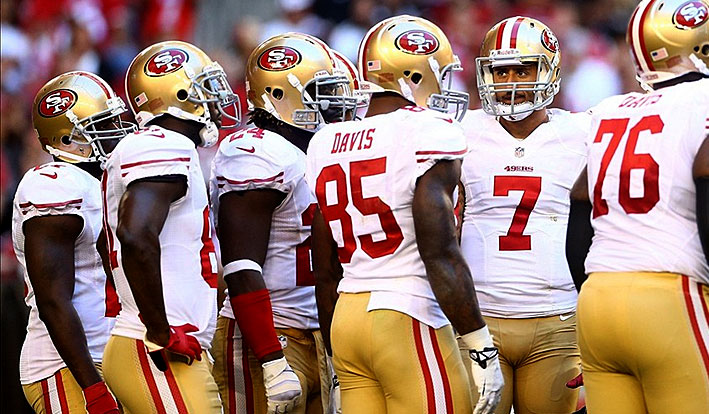 I don’t know how else to say it, but the San Francisco 49ers are going to find out that life without Jim Harbaugh is a lot tougher than they ever thought it would be.In spite of leading the Niners to three straight NFC Championship games and one Super Bowl appearance, CEO Jed York and general manager Trent Baalke could never get along with their demanding former head coach.Exit Harbaugh and enter Jim Tomsula, a former 49ers assistant charged with keeping the Niners as relevant as they once were been under the current Michigan University head coach.

Tomsula is well-respected throughout the league, but he’s also never been a head coach and will be on the proverbial ‘hot seat’ almost from the time he coaches his very first game.San Francisco needs to re-sign Frank Gore and Mike Iupati first and foremost before looking to address their other needs via the draft and in free agency.Gore, San Francisco’s all-time leading rusher looks like he has another productive season or two in his legs at the least and younger back Carlos Hyde is supremely gifted athletically.The Niners could lose longtime defensive end Justin Smith to retirement, but they’ll probably be better on defense in 2015 thanks to the returns of Pro Bowl caliber linebackers NaVarro Bowman and Patrick Willis.Still, I just don’t see the Niners being as competitive or driven without Harbaugh as they ever were with him barking out orders like they were going out of style.San Francisco has the third toughest schedule in the league in 2015 (143-112-1, .561) and I think they’re going to struggle initially to find their new identity under Tomsula.I’m picking the Niners to fall just a bit short of recording double-digit wins by going .500 while compiling a losing ATS record.