If you watched the AFC Championship came back in January, you know that the Patriots took Andrew Luck and the rest of the Colts out to the woodshed. However, just reaching the AFC title game was a major step for a young team with a young and promising quarterback. Can the Colts beat the NFL odds and lines and reach the Super Bowl after the 2015 season?

Week 1 – Indy at Buffalo. This will be Rex Ryan’s first game at the helm of the Bills, who will feature LeSean McCoy running the ball and the usual Ryan defense. We like the Bills to knock off the Colts in an adrenaline-fueled tilt in the first week.Projected Record: 0-1.

Week 2 – New York Jets at Indy. This will be on Monday Night Football. The Jets feature one of the best secondaries in football, but they’ll either have wildly inconsistent journeyman quarterback Geno Smith or newly minted Jet Bryce Petty at the helm. Either way, the Colts should prevail. Projected Record: 1-1.

Week 3 – Indy at Tennessee. Even with the great Marcus Mariota, the Titans still are probably the worst team in the National Football League. The defense is porous, and the running game is nonexistent. Projected Record: 2-1.

Check out photos of @Jaboowins from his first two days of practice as a Buc: http://t.co/0DgDnRAVrv pic.twitter.com/Ch0zXTwHFr

Week 4 – Jacksonville at Indy. The Jaguars are another reason why the Colts will skate to an AFC South title – there are two awful teams and one team under construction (Houston) in the division. Projected Record: 3-1.

Week 5 – Indy at Houston. Andre Johnson is back in Texas, and this Thursday night tilt will be Houston’s attempt to send a shot across the Colts’ bow. The Texans are a little better, and the testosterone of a prime time game will give Houston a close win. Projected Record: 3-2.

Week 6 – New England at Indy. This rematch of the AFC title game will test how far the Colts have come. Can they stop the Pats on the ground? Can they score on the Pats defense? Luck will have the Colts up for this one. Projected Record: 4-2.

Week 7 – New Orleans at Indy. This does represent a potential trap game coming after a big win over the Pats. However, the Saints are terrible on the road. In New Orleans, I’d be worried, but in Indiana, I’m not. Projected Record: 5-2.

Week 8: Indy at Carolina. Carolina will be back in beast mode next year, and this Sunday night game will be another real test. However, the Colts have enough weapons to overwhelm that Panther D. Projected Record: 6-2.

Week 9: Denver at Indy. Peyton Manning comes back to his football home, and the Broncos are looking for payback after the Colts knocked the Broncos out of the playoffs last year. However, the Colts have more to offer and can fend off the Broncos’ pass rush. Projected Record: 7-2.

Week 11: Indy at Atlanta. I keep reading that the Falcons are going to be better, and they do play a lot better at home, but I can’t see them outscoring the Colts. Projected Record: 8-2.

Week 12: Tampa Bay at Indy
Andrew Luck vs. Jameis Winston? That will be a fun game to watch – or at least a fun first quarter, as the Colts will run all over the Bucs. Projected Record: 9-2.

Week 13: Indy at Pittsburgh
Sunday Night Football against Ben Roethlisberger gives the Colts a chance for redemption after that drubbing last year. There won’t be much of a chance. Projected Record: 9-3. 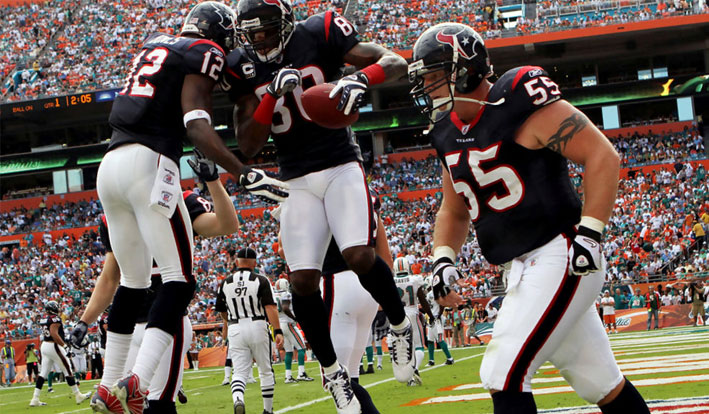 Week 15: Houston at Indy. Nope, the Texans have never won in Indianapolis, and they won’t win this time either. Projected Record: 11-3.

Week 17: Tennessee at Indy. Another easy win over an awful team. Projected Record: 13-3.

And what about going to the Super Bowl? The other contenders (Pittsburgh, New England, Houston, and Denver) are all beatable. Luck has the tools and the talent around him to do it. This could definitely be the Year of Luck.