NFL News and Rumors
If you’re an experienced NFL betting fan that has been around the block a time or two, then it’s highly probable that you know all about the jargon that is used in the game today.However, if you’re new to the sport of NFL football and you’d like to know more about some of the terminology that NFL players, fans and coaches use in today’s fast-paced football fraternity, then you’ve come to the right place!Thanks to this MyBookie.ag NFL original, you’re going to get the scoop on much of the jargon used in today’s fan-friendly National Football League, you’re going to find out all about snap-counts, sacks, shotguns and much more.Okay, with that said and the 2015 offseason rolling right along, let’s get started.

AFC – American Football ConferenceThe NFL is split into two, 16-team conferences. One is called the National Football Conference or NFC and the other is the American Football Conference or AFC. At the conclusion of each regular season, the top six teams in each conference stage an annual postseason period called the playoffs in order to decide the conference champions.The AFC champion then meets the NFC champion in the Super Bowl.Audible – An audible is when the quarterback changes a play at the line of scrimmage before the snap based on something he recognizes with the opposing defense. The quarterback barks out a new play and the offense then executes that play.

Backfield – The backfield is the area behind the line of scrimmage where the quarterback most often throws from and the running backs line up.Blindside – The blindside is the unseen ‘backside’ vision area that arises when a quarterback sets up to throw a pass. A right-handed quarterback’s blind side is manned by the left tackle, making it arguably the most important position in the game besides quarterback itself. A quarterback’s blindside is the most dangerous place to get hit from a defender as he ‘doesn’t see’ the pressure coming.Blitz – A blitz is a defensive play where a team sends more than the usual three or four defensive lineman after the opposing quarterback, depending on the scheme (4-3 or 3-4). When a blitz takes place, either an extra linebacker or two will rush the quarterback to try and force a sack or put extra pressure on the quarterback. On other occasions, the ‘blitzing’ defender may be a cornerback or safety. Using a blitz can often be risky for the defense with one or two fewer players dropping back into coverage to defend against a pass play.Bomb – A ‘bomb’ is simply a long pass completion.Bootleg – A bootleg is a play in which the quarterback deceives the defense by faking a handoff and hiding the ball against his hip as he runs in the opposite direction of the running play. After bootlegging to the end of the line, quarterbacks can either throw to open receivers or run downfield on their own.

Chain Gang – The chain gang is a group of a half-dozen men who assist the officials in marking and keeping yardage. The first down chains measure 10 yards in length and have a post at each end. The first post sits on the line of scrimmage and then the chain stretches 10 yards to the second post, which signifies the yard mark needed to pick up a new first down. 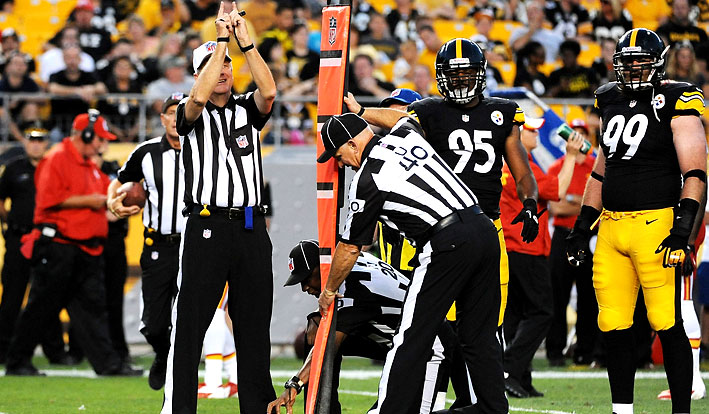 Clipping – A clip is an illegal block where one player blocks another in the back. A clip is very dangerous as the player being hit often never sees the blow coming.Completion – A completion is a forward pass that is successfully caught by an eligible receiver.Cut or cutback – A cut or cutback is term used to describe a player changing directions on the fielding an effort to make an opposing player miss a tackle.

Delay of Game – A delay of game penalty occurs when the offensive team fails to snap the ball within the 40-second window allowed from the end of the previous play. A five-yard penalty is charged to the offense for this infraction.Draw – A draw play is a fake pass play that turns into a disguised a run. Once the quarterback drops back to pass and his offensive linemen drop back in pass protection, thereby giving the illusion of a pass play, the quarterback then hands the ball off to a running back who is supposed to hit one of the holes created by the on-rushing defense.Drop – Let’s see…a drop is when a wide receiver gets hit right in the hands or between the numbers with a catchable pass…only to drop it for an incompletion.

End Zone – The 10-yard scoring areas at each end of the field id called the end zone. A player must carry the ball or catch a pass and come down with possession over the plane of the end zone in order to a core a touchdown.Extra point – The extra-point is the short kick that comes after scoring a touchdown. It is worth one point instead of the three points that a field goal counts for.

Face mask – The facemask is the protective cage or bars attached to the front of a player’s helmet. Tackling a player by grabbing his face mask is a penalty ranging from 5 to 15 yards depending on the severity. 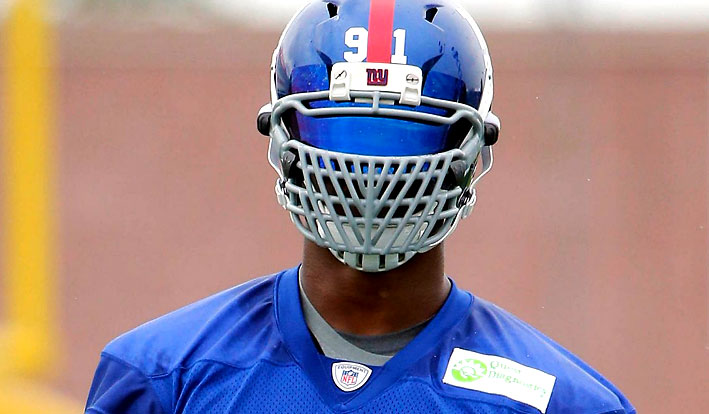 False start – A false start is a penalty called when an offensive player begins to move out of his set stance prior to the ball being snapped into play.Field goal – A field goal is a kick that is worth three points when the place kicker boots the ball over the crossbar and through the posts. A field goal can also be blocked by onrushing defensive players, although the feat is pretty rare.Flat – The flat is area on either side of the line of scrimmage between the final offensive lineman and the sideline. This is an area of the field generally reserved for short passes to running backs or screen plays for wide receivers.

Game plan – A ‘game plan’ is a team’s strategy that they will use for each opponent based on the strengths and weaknesses of both, themselves and their opponents. A game plan consists of a set of plays that each team’s coaching staff believes will work best against that week’s opponent.Goal line – The goal line marks the end of the field as far as yardage is concerned and the start of the end zone. A player scores a touchdown when any part of the ball breaks the plane of goal line.

Hail Mary – A ‘Hail Mary’ is a desperation pass downfield usually employed at the end of a half or game. A team lines up three or four wide receivers on the same side of the field and has them all run directly down field, generally, into the same area of the end zone. The quarterback then heaves a long throw downfield in the hopes that one of his receivers will come down with the football in the end zone.Hashmarks – The lines that run one yard apart down the center of the field. They are located 70 feet and 9 inches from each sideline. If a play ends on the right side of the field the succeeding play will begin from the right hashmark and likewise for the left side of the field.

Ineligible receiver – An ineligible receiver is a player who cannot legally catch a forward pass. This includes all offensive linemen and any receiver who has stepped out of bounds during the play and then comes back onto the field.Interception – A change of possession that takes place when the defense intercepts a pass from the opposing quarterback.

Kick-Off – The opening kick of a game or half as well as the kick-off to the opposing team following a score. 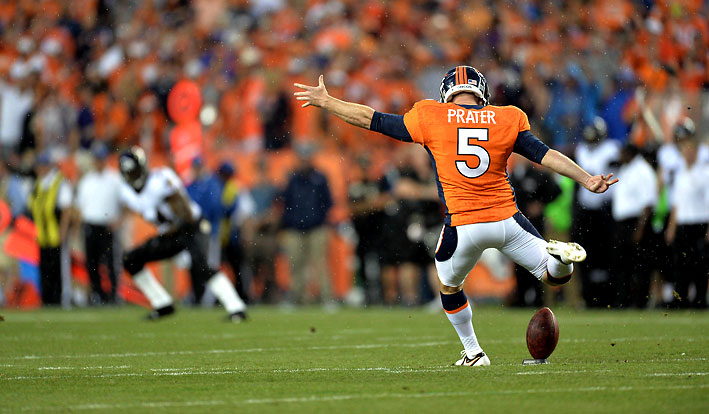 Lateral – A pass that goes backwards. A team can throw as many lateral passes as it likes on any play.

Motion – The moving of an offensive player from one position on the field to another prior to the snap of the ball. Receivers, tight ends and running backs are the players most likely to go in motion to confuse the defense.

Offside – A penalty called when any part of a player’s body is across the line of scrimmage when the ball before the snap of play.Onside kick – A short kickoff that carries the required 10 yards and allows the kicking team to attempt an improbable recovery. It is often used in desperate situations where the kicking team needs to regain possession of the ball quickly.Option pass – A trick play where the quarterback hands the ball to a running back and the ball carrier has the option to either run with the ball or throw it to a receiver downfield.

Pass Interference – A penalty called when a player impedes or hits an opponent as he attempts to catch a pass.Pass pattern – The route a receiver runs before he catches a pass from the quarterback. This is pre-determined in the huddle or via an audible before the play so the quarterback knows exactly where his receiver will be.Play-action pass – A deceptive play where the quarterback pretends to hand the ball to a running back in the hope of bringing defenders and in to the line of scrimmage. The quarterback then pulls the ball away from the running back and throws to a receiver downfield.Pocket – The ‘pocket’ is the protected area around the quarterback formed by his blockers as he passes. It generally forms a ‘U’ or ‘pocket’ shape, hence the term, pocket. 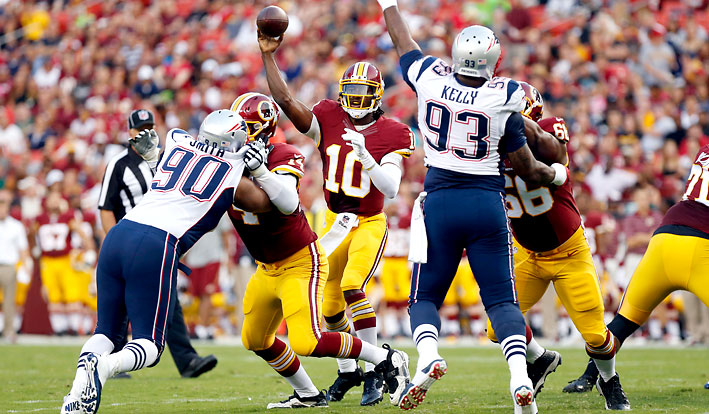 Prevent defense – A conservative defensive approach usually adopted when protecting a large lead late in games. The defense will guard against long pass plays by having more defensive backs retreat into coverage.

Quarterback sneak – A play used in short yardage situations as the quarterback takes the snap from the center and immediately runs forward behind his blockers.

Reverse – A reverse is a play designed to trick the defense as the quarterback hands the ball to a running back or wide receiver heading in one direction and another running back or receiver then receives a handoff coming back the other way behind the line of scrimmage.Roughing the passer – A roughing the passer infraction is a 15-yard penalty that occurs when any defensive player runs into or hits the quarterback after he has thrown the ball.

Sack – A sack is when a defensive player takes down the opposing quarterback behind the line of scrimmage for a loss.Safety – A safety is a rare two-point scoring play usually caused by the ball carrier or quarterback being tackled by a defender in his own end zone.A safety is also a defensive back that lines up deep in the middle of the field and provides cover for the cornerbacks on each side.Shotgun – An offensive formation in which the quarterback takes a long snap from the center while standing five to seven yards behind the line of scrimmage.Strong side – The side of the offensive formation that features the tight end.

Toss – A pitch to the running back by the quarterback. A quick way to get the ball into the running back’s hands on running plays.Touchback – When the ball is kicked or punted into an opponent’s end zone. The ball is whistled dead and the opposing team takes possession on its own 20-yard line.Turnover – Any play where the offense turns the ball over to the defense. Interceptions and fumbles that are recovered by the opposition are considered turnovers as are teams that attempt to gain a first down on fourth down and fail, thereby turning the ball over to the opposing team. 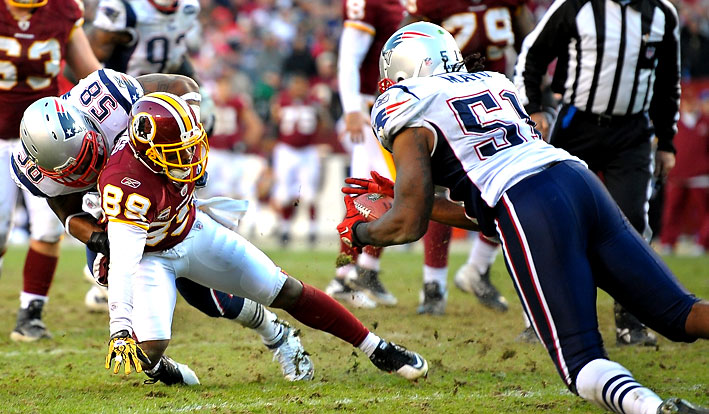 Weakside – The side of the offensive formation that does not feature the tight end.

Yard line – The markings on the field used to determine yards gained and field position.

Zebras – One of the many nicknames for NFL officials, who wear black and white striped shirts. SourcesNFL.com (http://www.nfl.com/standings?category=conf)Wikipedia.org (http://en.wikipedia.org/wiki/Hail_Mary_pass)
Older post
Newer post