NFL News and Rumors
New coach Dan Quinn is tasked with turning around the Atlanta Falcons in 2015-2016. Can he pull off the feat or will the Falcons continue to free fall in the NFC South? Join us as we preview the Falcons’ NFL schedule and serve up NFL betting predictions against projected season win totals currently on offer.

Atlanta Falcons Look To Bounce Back

Atlanta Falcons will look to pick up the pieces after finishing on an subpar 6-10 note in 2014, but it’s been two seasons in a row that the Falcons have disappointed so nothing can be taken for granted. In 2012-13, the season following their stupendous 13-3 SU finish to win the NFC South, the Falcons mustered up just four wins. Last season, they improved (using the term loosely) to six wins.  A grand total of ten wins across two seasons. Hardly the stuff of a legitimate competitor, is it?

That said, odds makers have chalked the line at 8.5 season win totals. The important bit – worth taking stock of before making your NFL picks – the UNDER is favoured at -125 NFL odds while the OVER is trading just a smidgen shy at -105 NFL odds. Does this mean the public isn’t buying what the Falcons are selling?If there’s one thing the Falcons have going for them it’s the fact that they’ve received the easiest NFL schedule, ranked No.32 in the NFL and boasting a 0.409 winning percentage. Largely down to the fact that six of the 16 games they are slated to play are against divisional foes. Do we need to remind NFL bettors just how anaemic the NFC South was last season with the entire field emerging under .500. As well, they have a favourable crossover with the AFC South, which boasts two of the NFL’s quintessential long shots in Tennessee Titans and Jacksonville Jaguars that have between them five wins. That’s helped bring down the overall winning percentage of their NFL schedule even further. 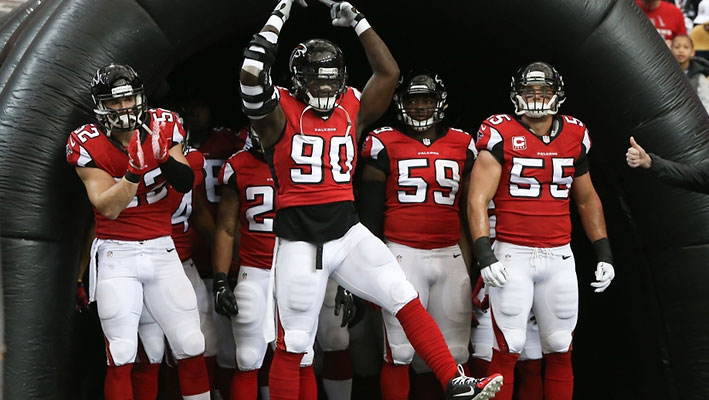 Still, that’s just how things stack up on paper. It doesn’t mean the Falcons will have it easy or that they’ll live up to NFL betting expectations. On that note, let’s breakdown the Falcons’ weekly NFL schedule and serve up our predictions and NFL picks against the season win total odds that are currently trading.

The pressure is on Dan Quinn right out of the gates as he’s set to lock horns with Chip Kelly’s Philadelphia Eagles on Monday Night Football in week 1 NFL betting. The matchup has all the makings of a shootout between two offensive-minded outfits. The Falcons have home advantage, but don’t be surprised if the Eagles fly out of the coop with a win. 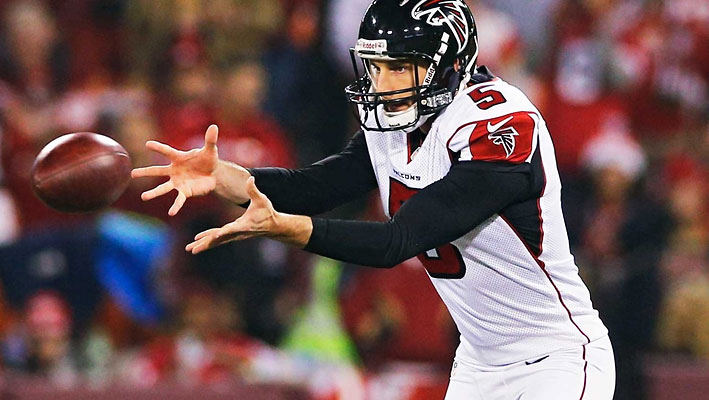 Week 2 NFL betting serves up a date with the NY Giants on the road followed by a date with the Dallas Cowboys on the road in week 3 NFL betting. Two tough customers if last season were any indication. The Falcons lost to the Giants 30-20 last season while the Cowboys were one of the standout teams in the NFC. Finally, the Falcons wrap up the first four-week stretch with a home date against the Houston Texans. While there may be question marks on the quarterback front in Houston, the defense is nothing to scoff at.

Week 5-8: Lighter LoadThings lighten up between week 5 and 8 for the Falcons as they face four subpar teams in 2014. They begin with a date against the hapless Washington Redskins (home), go on the road to the Superdome to take on the Saints in Thursday Primetime Football, then take on the rebuilding Titans in Tennessee before returning home to welcome the ever-evolving Bucs. 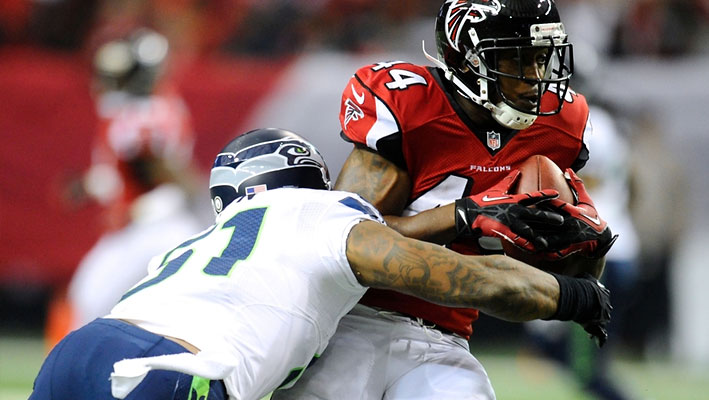 Of all the stretches on the schedule, this is the most favourable for the Falcons. What’s more, by this time the Falcons should be getting used to Dan Quinn’s tactics and that could bring about better results. As such, they could very well collect maximum wins over this four-game stretch.  Then again, that sounds too optimistic for a side that has taken ten wins in two seasons. Safer bet is a 2-2 SU record, which sounds reasonable.NFL Predictions: Falcons improve 2-6 or at best 3-5 SU

Before a week 10 bye, the Falcons travel to Levi Stadium to take on the revamped San Francisco 49ers. After the much needed respite, the Falcons face one of the toughest tests of the season in the Indianapolis Colts in week 11 NFL betting. It’s a road game for the Falcons; in other words a tough ask. Both these games are going to be tough for the Falcons to win. 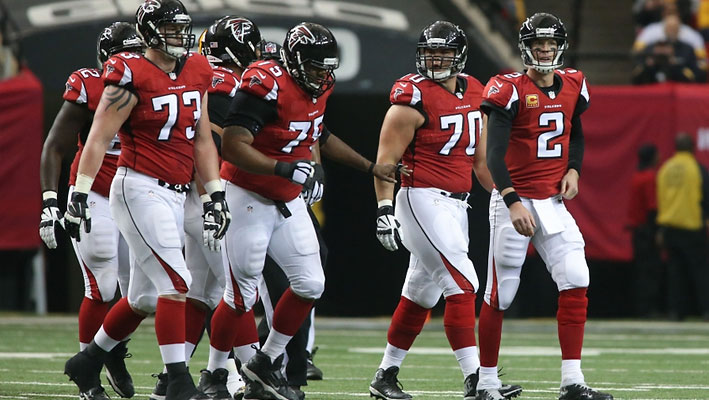 Things lighten up in week 12 and 13 with dates against Minnesota and Tampa Bay. Matt Ryan and the Falcons have some face saving to do against the Vikings, who embarrassed them in a 41-28 defeat, not to mention shocked NFL bettors. The Falcons swept the series with the Bucs last season. So as far as that matchup goes, the Falcons have to fancy their chances. Particularly seeing as they are going to be led by rookie Jameis Winston at some point, the Falcons should very well repeat the sweep. All in all, this could be a tricky stretch that sees the Falcons. They could go 3-1 SU over this stretch, but we feel no joy in that prediction. So, again the safer NFL pick is to go 2-2 SU.

The Falcons close the season with a four-game stretch that looms somewhat favourable on paper, as all four teams finished below .500 last season. Three games, however, feature a divisional foe. Two of which are against AFC South champions Carolina Panthers. The only game during this stretch that appears to be a lock is the Jacksonville Jaguars game in week 15 NFL betting on the road. 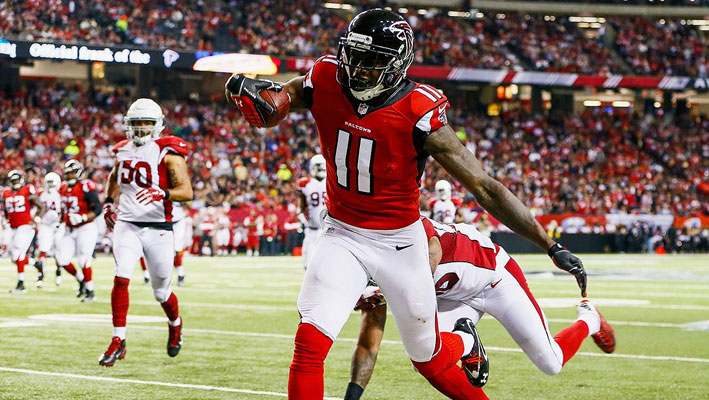 The rest are up for grabs, including the season curtain closer against the New Orleans Saints at the Georgia Dome. At worst, the Falcons go 1-3 SU during this stretch. At best, they go 3-1 SU with a three-game winning streak to close the season. Push comes to shove, we’re going to be optimistic and go with a 3-1 SU scenario.

This isn’t the Holy Grail of NFL betting, but for what it’s worth we’re estimating the Atlanta Falcons to reach at best a .500 mark in Dan Quinn’s first season at the helm. According to our predictions, that still puts us UNDER the 8.5 line odds makers project for the Falcons. So the recommended NFL pick is take the UNDER 8.5 at -125.SourcesESPN.com (http://espn.go.com/nfl/story/_/id/12266781/dan-quinn-agrees-five-year-deal-atlanta-falcons)Rotoworld.com (http://www.rotoworld.com/player/nfl/9376/jameis-winston)
Older post
Newer post