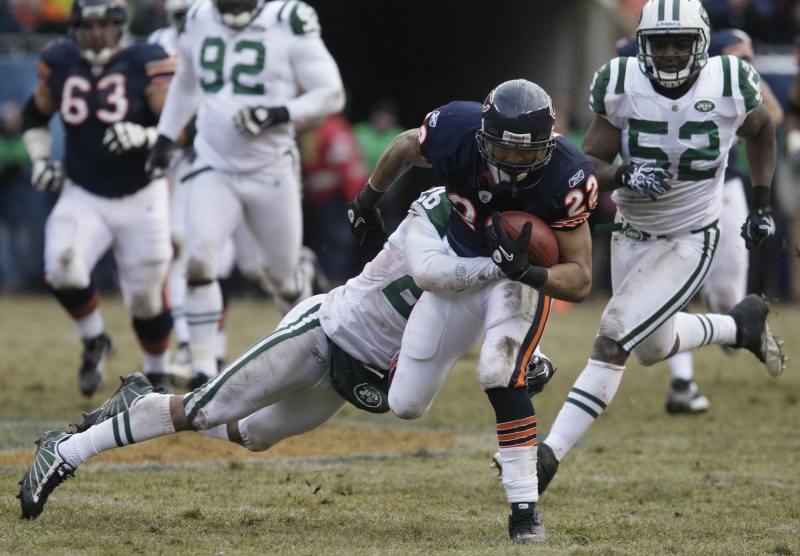 NFL News and Rumors
The New York Jets will be hosting the Chicago Bears on the field turf surface of MetLife Stadium in East Rutherford on Monday night. This will give NFL bettors the chance to see how the teams, both 1-1 , perform under pressure. In terms of betting, the two teams are very similar, entering the game at .500, following an 8-8 record last year, which give us an idea of why they are so close in the NFL game lines (The Jets enter the game as 2.5-point favorites).

The Jets and Bears are both looking rather strong heading into this game. The Bears are more than likely going to force Geno Smith into more of a running effort while also getting the Jets to be more reliant on Ivory and Johnson. Meanwhile, the Jets will have to give more coverage to Marshall and Alshon Jeffrey in order to limit Cutler’s potential to be productive. Still, the running defense could end up seeing a bigger challenge off of Forte as he may be pressed into more action than what he’s gotten so far this year. Whether or not backup quarterback Michael Vick will be put into action on some special plays is unclear but it could be to take advantage of the running game.The Chicago Bears came back from an opening week loss to Buffalo to take a 28-20 win over the San Francisco 49ers this past weekend, thus going through a +7 spread. Jay Cutler has practically found a strong target this year in Brandon Marshall. He already has four touchdown passes to him this year. However, the running game has been struggling to start the season. Matt Forte only has a little more than a hundred rushing yards so far this year. Meanwhile, the Bears defense has improved so far this year. Willie Young already has three sacks for the season. Still, opponents have 320 rushing yards against the team this season.Game Odds:BEARS: +2½-105, OV 45 -110, ML +130JETS: -2½-115, UN 45 -110, ML -150The New York Jets got a push on their last game. They were listed at +7 against Green Bay and ended up losing the game 31-24. This came in spite of the Jets having a good lead for much of the game. Chris Ivory and Chris Johnson have tallied for much of the team’s offense this year. The Jets have 358 rushing yards so far versus a little more than a hundred for their opponents. Even quarterback Geno Smith has a rushing touchdown.The Jets have six sacks this year with two coming from Demario Davis. However, they only have two tackles that were for a loss. Still, the team has done well with regards to limiting their opponents by limiting them to about two rushing yards per carry.

The New York Jets are favored by -2½ points to win this game and the total is listed at 45. From a football betting perspective, it is best to take the Bears at +2.5 and to go under for this game. The Bears’ improved passing efforts may end up being a bit of a challenge for the Jets to cover, so expect the Bears to pull away a victory.

One important aspect of this game is that it will consist of the Bears and Jets going at full speed. There are no very significant injuries between the two teams to cover. The game is a fascinating one that will feature some strong teams that will be competing with one another in a strong matchup that will be rather close.
Older post
Newer post