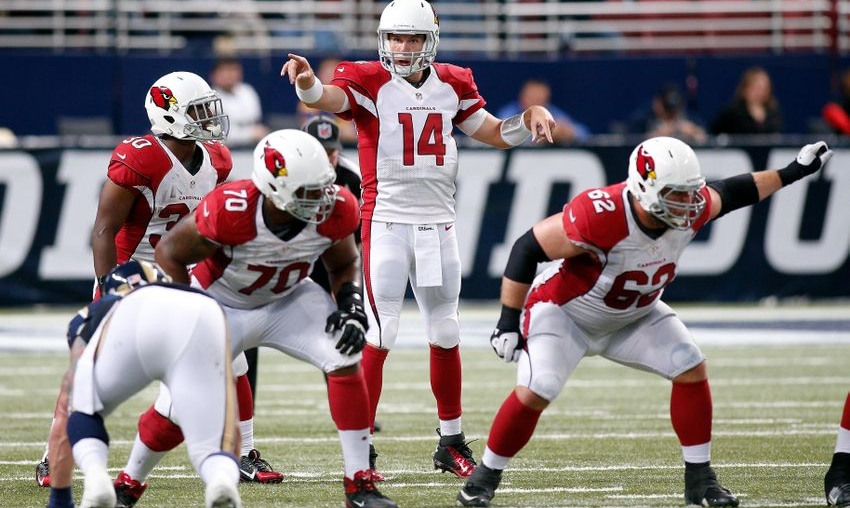 NFL News and Rumors
2014 NFL coach of the year Bruce Arians and his Arizona Cardinals team have their eyes set on recording a third successive double-digit season after winning 10 games (in 2013) and 11 games (in 2014). Arians, who also won the coach of the year award with the Indianapolis Colts two years ago, was indeed a standout coach and deserved praise for his team’s performance in 2014. In spite of losing his franchise quarterback, his backup quarterback and a number of treasured starters on defense to injury, he still helped the Cards to navigate through the NFL’s toughest division, the NFC West, to win 11 games (and nearly clinching the divisional title).

With his stellar coaching reputation and a good number of his injured starters getting healthier in the offseason, the big question heading to the 2015 NFL betting season is: Can the Cardinals make it three years in a row with double-digit wins, or will the NFC West prove too tough to handle for Arians’ boys?

Having hacked an 8th-ranked 2014 schedule to get to 11 wins (even with their multiple injury concerns), the schedule-makers decided to give the Cardinals a tougher test, fixing them with the 5th-toughest NFL schedule in 2015 (going against opponents with a winning percentage of 0.557). Undeniably, combating such a schedule won’t be easy, particularly if you consider the tough nature of the division. 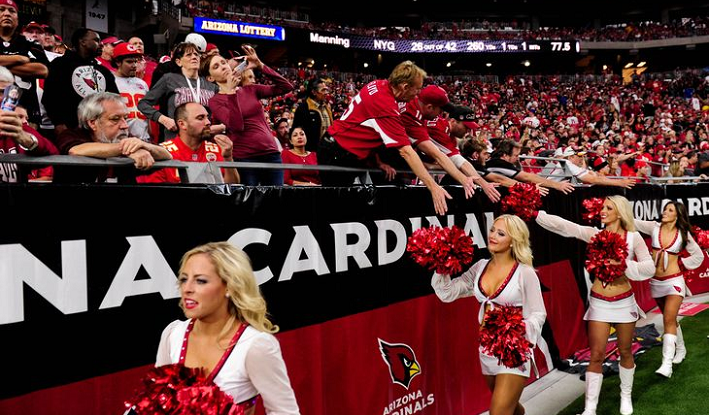 In the new season, the Cards face two division opponents that reached the respectable .500 mark in Seattle and San Francisco, going against both teams twice for a total of 4 challenging games.Meanwhile, the rest of their 2015 schedule consists of top-heavy teams, including Detroit, Pittsburgh, Baltimore, Cincinnati, Philadelphia and Green bay, who all had winning seasons in 2014, with nearly all of them finishing well above the .500 mark. The toughest of their stretches will particularly come in the final three weeks of the season, where they’ll be going against the Eagles, Packers and Seahawks in succession.Nonetheless, the Cardinals have a fairly winnable slate of games at the start of the season, a favorable Week 9 bye, and 2 of their 3 prime-time games at home. In addition, Arizona has a maximum of two road games in a row, which should give them time to go back home and re-energize for their bumpy road tests.

Role of Coaching and the Roster

Even with the tough schedule lurking ahead of them, the Cards have a good unit, which should count greatly in their favor for the upcoming season. As earlier mentioned, coach Arians knows his job, no wander he has received two coach of the year awards in three years with two different teams. Additionally, in the franchise’s history, you would have to go back to the 1970s in the Don Coryell era to find an Arizona coach that recorded back-to-back double-digit win seasons in his first two years with the team. 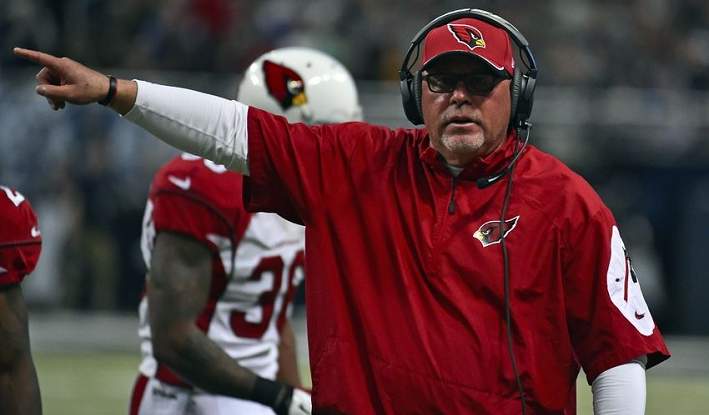 But more important than Arians’ impeccable coaching skills, the Cardinals have a roster that is good enough to beat the NFL odds for another successful season. Carson Palmer, Arizona’s franchise quarterback, suffered a season-ending knee injury in 2014, but latest reports indicate that he is back in mini-camp training. Expectedly, he is still working on his footing, and being a 35-year-old, his recuperation and involvement in the team has to be done precariously.Even so, Palmer has shown promising signs in training and, if he can regain full fitness, the Cards should be good to go for a solid season. Prior to suffering last season’s injury, Palmer started the first six games of the season, leading the Cardinals to a flawless 6-0 start, while passing for 62.9 percent, 1,626 yards, 11 touchdowns and just 3 interceptions. In contrast, his average backups Drew Stanton and Ryan Lindley compiled a 5-5 record.Having Palmer at the center will thus be crucial for the team. But in the instance that the Cards feel Palmer can’t go it the whole season with his injury, rumors have it that a potential trade for Tampa Bay’s quarterback Mike Glennon could be sanctioned, offering the team better value at the backup QB department. 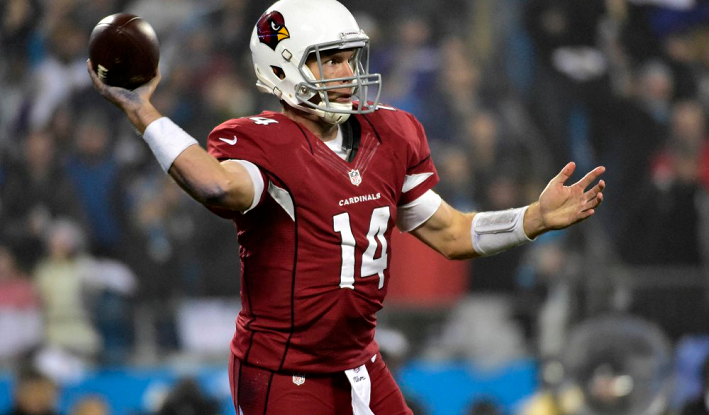 Quarterback issues aside, the Redbirds strengthened the team in the off season by re-signing star receiver Larry Fitzgerald and adding Darryl Sharpton, Sean Weatherspoon and LaMarr Woodley to their linebacker corps. Highly-rated guard Mike Iupati also signed with the Cards from San Francisco, while the defensive line got its share of much-needed improvement through the addition of veterans Corey Redding and Corey Peters. The defensive additions will particularly be important for the team now that their Todd Bowles (their defensive coordinator in 2014) left Arizona and is currently head-coaching the Jets.Not to forget, the O-line claimed a potential star in first-round draft selection D.J. Humphries (a highly touted OT from Florida) and Markus Golden (a standout pass rusher from Missouri).With such a promising tools, the “artistic genius” in coach Arians should be able to sculpt a masterpiece for Arizona fans in the upcoming season, even if the surrounding circumstances don’t look to be in their favor.

Going by our crystal ball, the Cards should be able to sweep off all their games between Week 1 and Week 5 (beating New Orleans at home, Chicago on road, San Francisco at home, St. Louis at home and Detroit on the road). Then starting in Week 6, things should start getting tricky, with the Cards losing to Pittsburgh (on the road), rebounding with a Week 7 win at home over Baltimore, followed by a Week 8 victory over Cleveland on the road.Week 9 will be a bye, so that takes us to Week 10, where they will probably lose to Seattle on the road. Starting in Week 11, the games should go as follows—win over Cincinnati at home, loss to San Francisco on the road, win over St. Louis on the road, and loss to Minnesota at home (Yes, Minnesota because of hellish combo Bridgewater and Peterson). Then, in the final 3-game baptism of fire stretch against Philadelphia (on the road), Green Bay (at home) and Seattle (at home), the best we can give here is one upset win, probably against Seattle in the final game. 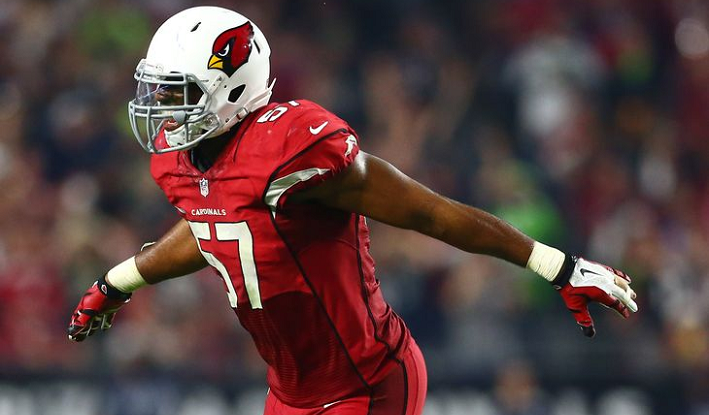 Totaling all that, a 10-6 record (give or take one win) is our prediction for the Cardinals in 2015. Considering the Odds makers rolled the Cardinals for an 8.5 total (-125 Over, -105 Under) season total, the Cards should be able to offer good value on the OVER total.As for the questions for the double-digit win total, the predicted 10-6 means that we say YES to a third straight 10-or-more win season. But as a crucial note, the Cardinals and their 2015 season will greatly depend on the health of the team, especially in regards to Palmer at the center. If Palmer stays healthy, then everything should go as predicted. But if he suffers another setback, the production in Arizona could be affected, making it challenging for the Cards to duplicate their commendable exploits from last season.Sources:NFL.com: http://www.nfl.com/draft/2015/profiles/d.j.-humphries?id=2552626
Older post
Newer post