NFL News and Rumors
The Washington Redskins (4-12 SU, 5-11 ATS, 8-8 O/U) will enter the 2015 NFL regular season with two main questions surrounding their franchise. The first and foremost query that Washington needs answered is whether or not former franchise signal-caller Robert Griffith III is still worthy of that label.The second major question the Skins face is almost as important as the first. If RG3 is not the future for Jay Gruden’s rebuilding ballclub, then who is? Thank to this in-depth look at the Skins and their chances of cashing in on their 2015 Super Bowl NFL betting lines will both, entertain and inform as you get prepared for your 2015 NFL wagering campaign.

Washington didn’t have a whole lot of ‘good’ happen for them in 204 and will need to fill a bunch of holes heading into the 2015 season. Still, like every franchise, Washington can highlight a few positive happenings from this past season.I guess I’ll start with the fact that underrated running back Alfred Morris racked up his third straight 1,000-yard season while averaging 4.1-yards-per-carry despite getting a career-low 265 attempts. Morris has almost 4,000 career yards (3,962) in three seasons, though his total has declined each year.Next, I guess I’ll go with the fact that Washington somehow finished 11th in passing, though they went through their trio of quarterbacks for various reasons including injury and inefficiency. Washington also finished a respectable 12th in run defense, though that was about the only highlight from a defense that gave up points like they were going out of style.The Redskins also saw the acquisition of former Eagles wide receiver DeSean Jackson pay off in a big way in 2014. In spite of catching just 56 passes, a figure that just surpasses his career-low of 47 (in 14 games), Jackson racked up 1169 receiving yards on a spectacular 20.9 yards-per-catch average. Jackson also burned his former team in Week 16 to kill Philly’s playoff hopes by catching four passes for 126 yards in his team’s thrilling 27-24 win.Last but not least, offensive tackle Trent Williams had a monster campaign to earn Washington only Pro Bowl berth.

Washington also finished the 2014 regular season ranked 24th in pass defense and an ‘ugly’ 30th in points allowed (27.4 ppg). Let’s take a look at Washington’s statistics from this past season.

While head coach Jay Gruden recently came out to announce that Griffin III would be the team’s un-challenged starter heading into the 2015 regular season, doubts remain about the once-beloved signal-caller’s durability and decision-making.RG3 has never played a full season in the league and has played in just 35 of a possible 48 regular season games. Even worse is the fact that Griffin’s record as a starter is just 5-15 over the last two seasons since he went 9-6 as a rookie starter back in 2012.Depending on whether or not Griffin III proves he can really be the transcendent franchise signal-caller everyone thought he could be when he was drafted three years ago, Washington may or may not need another answer at quarterback, particularly seeing as how both, Cousins and McCoy have shown they’re more suited to being career backups than actual NFL starters.I suspect the Skins will look to draft a young quarterback in the middle to later rounds of the draft and hope he overachieves.

Shawn Lauvo and Chris Chester were pitiful at the guard positions for Washington last season as both got routinely overpowered, generally en route to giving up a sack. Washington needs a pair of guards – and a right tackle – to replace Tom Compton.

I like Washington’s defensive line, but they need depth behind starters, Jarvis Jenkins, Chris Baker and Jason Hatcher.

Washington needs to replace three starters in their defensive backfield if you ask me, with only veteran safety Ryan Clark being worthy of keeping his job.

Washington will need a new backup for Morris and a third-down back if the underrated Roy Helu bolts for a bigger payday in free agency.

The Redskins have the fifth overall pick in the draft and could upgrade their defense by taking defensive end/linebacker Shane Ray, though reports say they could possibly take defensive tackle Malcolm Brown.

Washington Redskins +15000Washington is tied for the 30th best odds to cash in on their 2015 Super Bowl Futures Odds, so clearly, oddsmakers don’t see the Redskins as a viable threat to win it all – or reach the postseason for that matter.

I like Washington’s offseason hiring of new general manager Scott McCloughan and I believe the highly respected talent evaluator is going to get the Skins back on track as far as acquiring talent.However, it is going to take at least two or three years now for Washington to get back into title contention – and possibly longer if Griffin III turns out not to be the answer at quarterback. I also like Washington’s hiring of respected NFL coach Bill Callahan to put together a competent offensive line.Nevertheless, Washington has to tae care of business in free agency and in the 2015 NFL Draft while figuring out just what to do with their own free agents like wide receiver Pierre Garcon and Helu.One of this team’s big problems is that they have far too many overpaid players. I’m expecting Garcon and Helu to both fail to return because of financial reasons along with veteran cornerbacks DeAngelo Hall and Tracy Porter.Ultimately, I believe that no matter what Washington does this offseason, they’re looking at being a mediocre team at best – and potentially a horrible one again in 2015. The Redskins simply have far too many issues to address with their roster and need a nearly complete overhaul at most positions.I’m also not too sure that Jay Gruden is going to cut it as a head coach, though I do like his mind as an offensive coordinator. 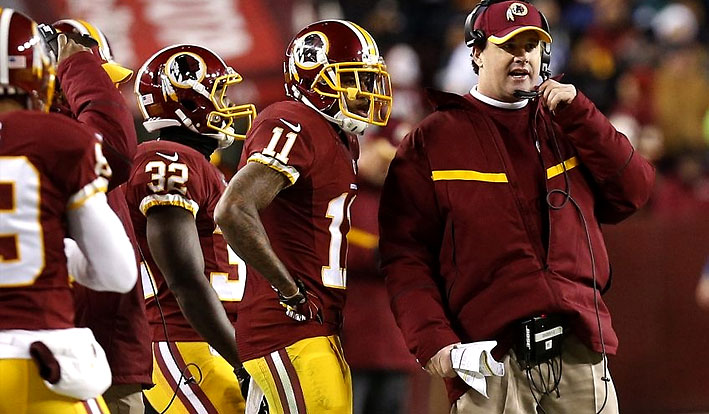 I am however, going on record to say that I believe 2015 will be a nice, ‘bounce-back’ season for Griffin III and that alone could help the team at least be competitive in most games.Hopefully, Gruden and the team’s front office brass are encouraging RG3 to sit down and watch a bunch of tape of Seattle’s Russell Wilson, another mobile quarterback that has absolutely mastered the position.With just the 20th strongest schedule in the league inn 2015, (122-133-1, .478), Washington should have a chance to approach an 8-8 record. However, I think six or seven wins are the most Redskins fans can expect out of this team next season.Washington will have a bunch of new faces on their roster this coming season and they’re going to need time to grow and learn. If RG3 starts out slowly or worse, gets injured again, Washington could go in the tank and win four games or fewer. However, I think six wins is more like it and eight ATS victories at the least.