I know a lot of young NFL betting fans may not remember Hall of Fame inductees, Charlie Joiner and Steve Largent, but I figured, since I’m an ‘old school’ kind of guy, this column would be right up my alley.

At any rate, I dug deep into my magic hat of comparison columns and out popped the names of Joiner and Largent, two absolutely fine receivers in their own right. However, when forced to make a choice, which player would you rather have?That is the question, now here are the answers – after a brief review of each player’s illustrious career of course.

Joiner played pro football for 18 years, longer than any other wide receiver in history at the time of his retirement. When he retired at the age of 39 after the 1986 season with the San Diego Chargers, he ranked as the leading receiver of all-time with 750 catches.Blessed with excellent speed and tantalizing moves, Joiner averaged 16.2 yards per catch and totaled 12,146 yards and 65 touchdowns, ranking sixth in career reception yardage at the time of his retirement.The Houston Oilers targeted Joiner for the defensive backfield when they picked the 5-11, 180-pounder from Grambling in the fourth round of the 1969 AFL-NFL Draft. Joiner played briefly on defense and the kickoff return team but soon became established as a premier pass catcher.In his fourth season in 1972, Houston traded Joiner to the Cincinnati Bengals in a four-player swap and four more years later in 1976, he was traded to the San Diego Chargers, where he would achieve his greatest success. 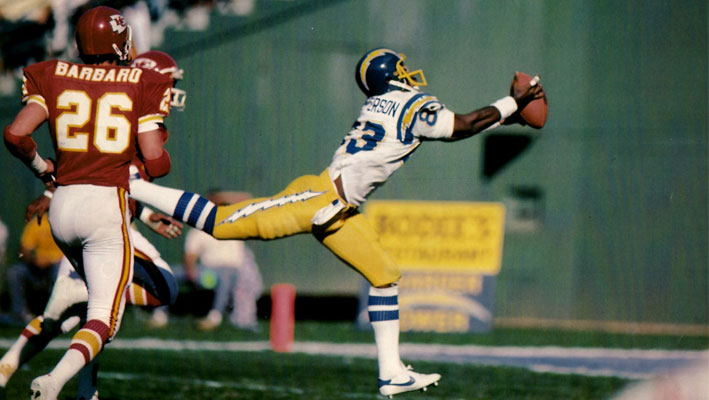 With the Chargers, Charlie Joiner blossomed into a full-blown superstar. He and quarterback Dan Fouts formed a lethal duo that accounted for Joiner’s 586 receptions as a Charger. During his 11 years in San Diego, Joiner caught 50 or more passes seven times and had 70 or more receptions in three seasons.Injuries cut into his playing time at the beginning of his career but, in a 193-game span over his final 13 seasons, Joiner missed only one game. He was an All-NFL pick in 1980 and a Pro Bowl choice three times. In the 1980 AFC title game, he led the Chargers with six receptions for 130 yards and two touchdowns.Joiner, who was born October 14, 1947, in Many, Louisiana, was once described by San Francisco 49ers coaching great Bill Walsh as “the most intelligent, the smartest, the most calculating receiver the game has ever known.” 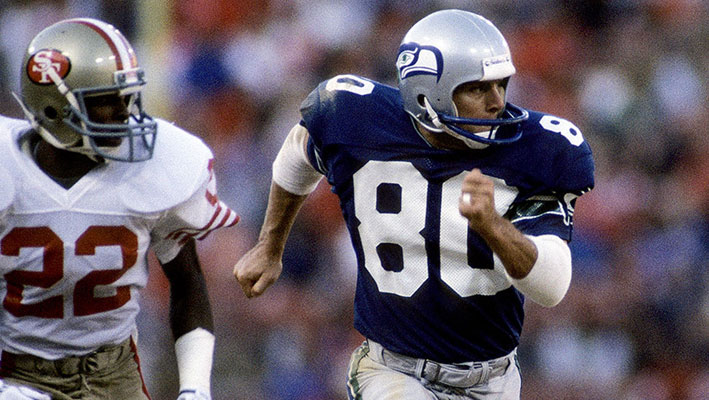 Standing only 5-11 and 187-pounds, Steve Largent possessed only average size and speed but, he was armed with exceptional determination and concentration, which is why he became one of history’s most outstanding pass catchers during his 14-season, 200-game career with the Seattle Seahawks from 1976 to 1989.At the time of his retirement, Largent held six major career pass receiving records – most receptions (819), most consecutive games with a reception (177), most yards on receptions (13,089), most touchdowns on receptions (100), most seasons with 50 or more receptions (10) and most seasons with 1,000 yards or more on receptions (8). All this by a receiver who the Houston Oilers thought was too small and slow to make it in the pros.Largent was the fourth round pick of the Oilers and the 117th player taken in the 1976 National Football League Draft. He played only four preseason games with Houston before being traded to the expansion Seahawks for an eighth-round draft pick. 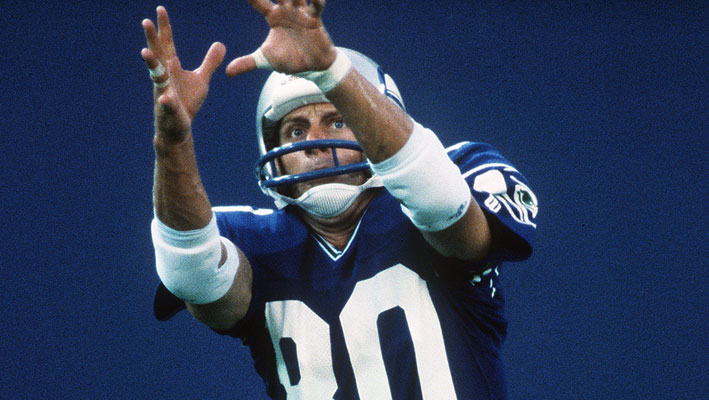 It was the catch of the century for the Seattle as Largent became an almost instant star with the Seahawks with 54 receptions, third best in the NFC,  his rookie season.Largent led the AFC with 71 receptions in 1978 and had five other seasons with 70 or more receptions as well. The sure-handed receiver, who ran nearly perfect pass routes, also led the NFL in pass-receiving yardage in 1979 and 1985. An All-Pro choice in 1983, 1985, and 1987, he was also named All-AFC three times and selected for seven Pro Bowls in a ten-season span between 1978 and 1987. Seemingly indestructible, Largent missed only four games because of injuries his first 13 seasons. 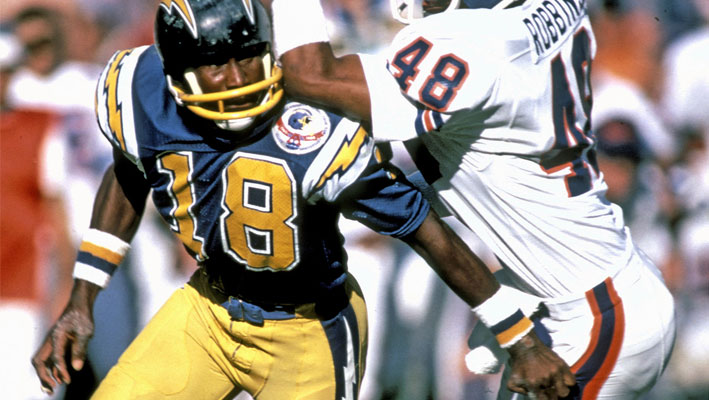 I’ll be totally honest and admit that making this choice was a lot tougher than I originally anticipated. However, after speaking with several of my professional colleagues and a number of front office sources throughout the NFL, who have seen both players play, as well as formulating my own opinion, I have come to the conclusion that Joiner was the better receiver – by a photo finish.Both of these players epitomized what a “possession” receiver’s role is all about. Neither player had blazing speed, (although Joiner was a bit faster) although both players had fantastic hands and habitually made the tough catch look almost routine.I won’t go shouting it from the rooftops because this was such a tough call, but in the end, I’m going to say that Charlie Joiner edges out Steve Largent in a photo finish of Hall of Fame wide receivers. Sources:NFL.com: http://www.nfl.com/player/charliejoiner/2517795/careerstatsPro-football-reference.com: http://www.pro-football-reference.com/players/L/LargSt00.htm
Older post
Newer post