NFL News and Rumors
The Cleveland Browns won seven games last season in what was their best campaign since winning 10 games back in 2007, but they’ll still face an uphill battle in the perennially powerful AFC North once online betting for the 2015 NFL regular season gets underway this coming fall.Even when the Odds to win Super Bowl 50 does not favor Cleveland, the revamped Browns will look to pull off a ‘Cinderella’ kind of campaign in 2015 and I believe they’ll at least have a shot to do just that. Thanks to this fun-filled, yet in-depth look at Cleveland’s hopes heading into the new season, you’re going to have a great idea of just what to expect out of the Browns when the 2015 season kicks off.

Cleveland Browns +7500While the Browns (7-9 SU, 9-5-2 ATS, 5-11 O/U) finally managed to win more than six games for the first time in ages last season, they are still a team that has a ways to go in terms of rebuilding into something of a legitimate postseason contender.Unfortunately, the Browns reside in an AFC North division that includes a trio of almost perennial postseason participants in Cincinnati, Pittsburgh and Baltimore, so Cleveland doesn’t have the luxury of getting ‘definite’ wins against any of their division rivals no matter where they play. Still, I think Cleveland can possibly be one of those teams set up for a Cinderella kind of campaign in 2015 – if all goes right of course.The Browns made a handful of transactions in free agency and some of them were very good additions. However, many NFL pundits gave them a bad grade for their lack of fervor in free agency despite having a boatload of money available.

While the Browns parted ways with quarterback Brian Hoyer and often enigmatic tight end Jordan Cameron, Cleveland did make some solid moves in free agency, even if their critics ripped them for not doing more.Cleveland’s best additions were those of veteran quarterback Josh McCown, cornerback Tramon Williams, wide receivers Dwayne Bowe and Brian Hartline as well as defensive tackle Randy Starks. I believe that each aforementioned veteran will contribute to some degree in 2015, although I expect the biggest contributions to come from Williams and Starks.Cleveland ranked eighth against the pass (224.5ypg) in 2014 and has one of the better defensive backfields in the league with Pro Bowl corner Joe Haden and veteran safety Donte Whitner being among the best players at their respective positions. I fully expect the additions of Williams and Starks to make Cleveland’s defense even more dangerous.The Browns still need to upgrade their offensive line with another new starter or two and could also use another addition or two along the defensive line after finishing the 2014 campaign ranked a dismal 32nd in rushing yards allowed (141.6 ypg).I think the Browns could have done better than Bowe and Hartline at the wide receiver position, but I still like the Browns to challenge for a Cinderella kind of campaign in 2015 – if Josh McCown has a solid season for now, second-year head coach Mike Pettine.

Unfortunately, after last season, I don’t think anyone knows quite what to expect from the veteran signal-caller. I’ll readily admit that I fully expected McCown to have a fine season for Tampa Bay in 2014, but it didn’t happen.After playing lights out football in place of Jay Cutler for the Bears in 2013, McCown took the free agent money and chance to start from Lovie Smith and the Buccaneers last season. Let’s just say things didn’t work out very well with McCown going 1-10 in 11 starts and completing just 56.3 percent of his passes while throwing a paltry 11 touchdowns and 14 interceptions. 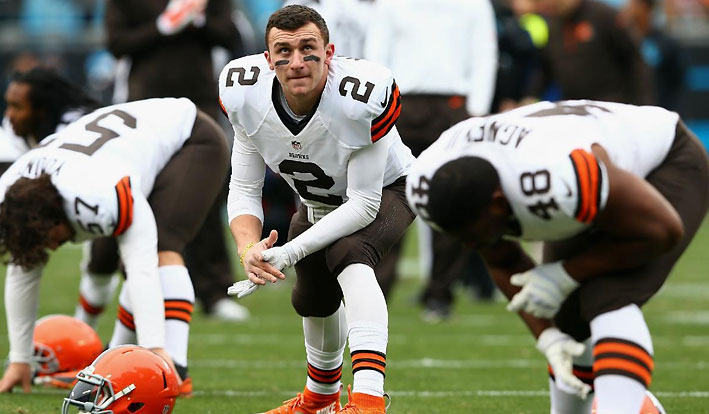 If McCown can regain the form he showed in 2013, then the Browns will have a great chance to pull off a Cinderella season. If he struggles, so will the Browns…unless second-year signal-caller Johnny Manziel suddenly lives up to all of the potential that made him a Heisman Trophy winning and first round draft pick.The Browns have more draft picks than any other team in the league this year and are the only team with two first round picks (12 and 19). I know Cleveland has the ninth toughest schedule in the league in 2015 and reside in arguably the toughest division in all of football, but hey, overcoming all odds when no one else could have ever seen it coming, is the definition of a Cinderella kind of season no isn’t it?
Older post
Newer post