NFL News and Rumors
If you’re an NFL betting fanatic or pro football betting enthusiast that is need of an offseason NFL football fix, then you’re in luck thanks to this mybookie.ag NFL comparison column original.This time, we’re going to take an in-depth look at the Hall of Fame careers of former Dallas Cowboys running back Emmitt Smith and Tony Dorsett in an effort to determine which legendary back was the best player over the course of his career with ‘America’s Team.If you saw both players play at some point in their respective careers, then you likely have your own opinion on which back was the ‘better’ player. If you’re a younger NFL fan that didn’t see one or either of these elite running backs, then again, you’re in for a treat!Let’s get started with the speedy Dorsett. 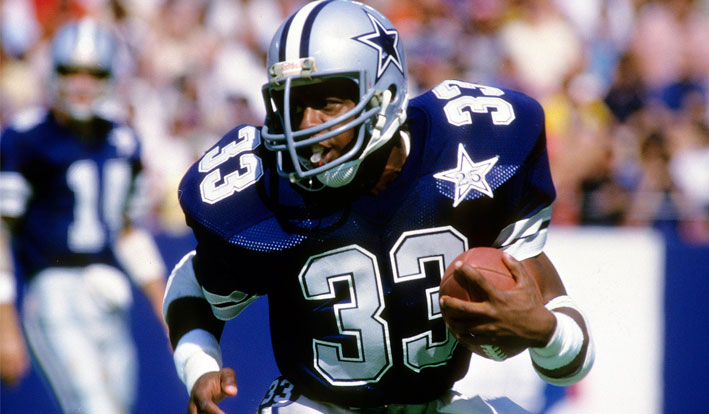 Tony Dorsett was born on April 7, 1954 and was clearly a special player throughout his entire NFL playing career. Orsett was undeniably one of the fastest running backs in the league during his era and was a threat to “take it to the house” every time he touched the ball.Dorsett helped the University of Pittsburgh to a national title in 1976, picking up the Heisman Trophy, the Maxwell Award and the Walter Camp Award while setting several NCAA collegiate records.He was a three-time All-American, and he finished his college career with an 6,082 total rushing yards, an NCAA record that would stand until it was surpassed by University of Texas running back, Ricky Williams in 1998.In his rookie season with the Cowboys in 1977, Dorsett led Dallas in rushing yards(1,007), rushing touchdowns(12) and ranked third in receptions(29), despite not becoming a full-time starter until the 10th game of the season.Dorsett went on to rush for 66 yards and a touchdown, while also catching a pair of passes for 11 yards in the Cowboys 27-10 victory over the Broncos in Super Bowl XII to become the first player to win a college football championship one year and then the Super Bowl title the next.In his NFL career, Dorsett rushed for 12,739 yards, caught 398 passes for 3,554 yards, and scored 91 touchdowns (77 rushing, 13 receiving, 1 fumble recovery).  On Monday, January 3, 1983 in a game against the Minnesota Vikings that I saw firsthand, Dorsett ran for a 99-yard touchdown to set an NFL record that still stands to this day. Oddly enough, the Cowboys were undermanned at the time, having only ten players on the field during the play.Dorsett made the Pro Bowl four times during his career (1978, 1981-1983) and rushed for over 1,000 yards in eight of his first nine seasons. The only season during that time that he didn’t reach the 1,000 rushing yards milestone was the strike shortened season of 1982 which had only nine games. Still, Dorsett led the NFC in rushing with 745 yards.‘TD’ was elected to both, the Pro Football Hall of Fame and the College Football Hall of Fame in 1994 and was enshrined in the Texas Stadium Ring of Honor the same year. 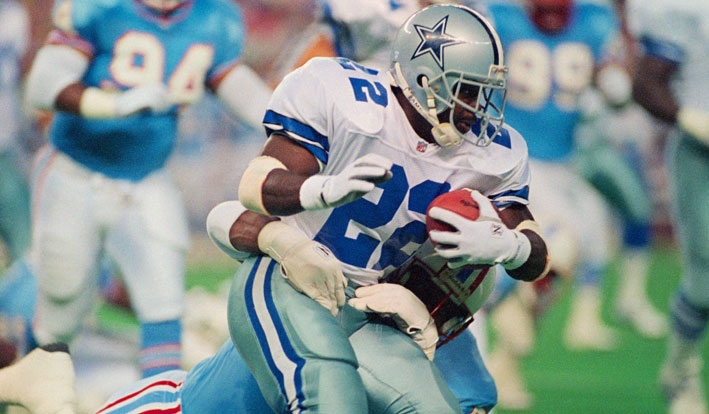 Emmitt Smith, the NFL’s all-time rushing yardage leader, was born on May 15, 1969 in Pensacola, Florida and is undeniably one of the most prolific running backs in NFL history and just the seventh player in NFL history to carry the title of all-time rushing leader.Smith set 58 school records at the University of Florida, including the single game rushing record in his very first start, en route to winning the SEC Freshman of the Year award and a ninth place finish in the Heisman Trophy voting.Smith bounced on Florida following his junior year,;leaving the school with 3,928 career rushing yards and 36 touchdowns. In 1989, Smith was named a first-team All-American, SEC Player of the Year and finished seventh in the Heisman voting after rushing for 1,599 yards and 16 TDs.Smith is the first player in NFL history to have five consecutive seasons with over 1,400 rushing yards and joins onle Jim Brown as only players in league history with seven straight 10-touchdown seasons to start their career.With 1,021 yards rushing in 2001, Smith became the first player in NFL history to rush for 1,000 yards in 11 consecutive seasons and the first to post 11 1,000-yard rushing seasons in a career. He is also the NFL’s all-time leader in rushing attempts with 4,409.Smith currently holds the NFL record in career rushing yards with 18,355 and is the only player in NFL history to rush for over 18,000 yards, breaking the previous record held by Walter Payton, on October 27, 2002. Smith also leads all running backs with 166 career touchdowns and his 175 total touchdowns ranks him second in league history only to former wide receiver Jerry Rice’s 207 career touchdowns. 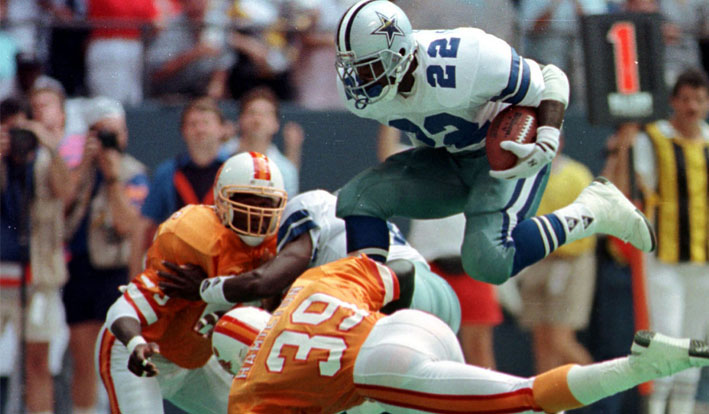 The sum of Smith’s rushing yards, receiving yards (3,224) and fumble return yards (-15), gave him a total of 21,564 yards from the line of scrimmage, making him one of only four players in NFL history to eclipse 21,000-combined yards.Smith also accumulated a number of NFL postseason records, including rushing touchdowns (19), consecutive games with a rushing touchdown (nine) and 100-yard rushing games (seven). His 1,586 yards rushing is also tops on the NFL postseason chart, and he shares the total playoff touchdown mark of 21 with Thurman Thomas. Smith is also one of only five NFL players who have amassed over 10,000 career-rushing yards and 400 career receptions and Smith and Rice are the only two non-kickers to score 1000 points in a career.Analysis: I’ll get right to the point by saying that I believe Tony Dorsett is the Dalas Cowboys greatest running back of all-time, despite gaining almost 6,000 less yards in his career than Smith.First and foremost in my mind is the fact that, although Dorsett played on some excellent teams, I don’t know if any were of the same caliber as the powerful teams that Smith played on. I know for a fact, that Smith perennially played with better offensive lines than Dorsett an some of the best for any running back in league history.However, Dorsett has the higher yards-per-carry average, if ever so slightly and Smith carried the ball over 300 times in a season on six separate seasons in his career while racking up over 350 carries four different times.Tony Dorsett surpassed the 300-carry mark only three times in his career and never was given the ball for 350 carries in a single season in his career, coming close only once, when he had 342 carries in 1981.Yes, Emmitt Smith has the edge in durability it would seem, but beyond his immense statistical excellence, I believe Dorsett was more of a natural runner whose vision was almost unparalleled.  Dorsett was undoubtedly more elusive, making him harder to tackle in my estimation, although I will say that Smith was the more powerful runner of the two – an an absolute load to bring down once he got a head of steam going.For me, statistics can often be misleading. Just because Emmitt Smith is the league’s all-time leading rusher, does that make him the league’s greatest runner ever?Not for me – that title belongs to former Chicago Bears running back Walter Payton, followed closely by both, Barry Sanders and Jim Brown.That’s not to say that Smith isn’t one of the all-time greats. To suggest such would be sheer nonsense. What I am saying though is that Smith’s greatness has been surpassed by several other runners in the league’s lengthy history – even by his fellow former Dallas Cowboy – Tony Dorsett.The Pick: Tony Dorsett Sources:Pro-football-reference.com: http://www.pro-football-reference.com/players/D/DorsTo00.htmNFL.com: http://www.nfl.com/player/emmittsmith/2503017/careerstats
Older post
Newer post