NFL News and Rumors
If you’re old enough to remember Pittsburgh Steelers’ Hall of Fame wide receivers,  Lynn Swann and John Stallworth, then you’ve undoubtedly got an opinion on which legendary pass-catcher was the better player.If you’re not old enough to have seen either superstar, that’s okay, you’re about to get a fun-filled education on both players followed by my expert opinion on just which player was the better wide receiver over the course of their now, historic careers.First, let’s take a look back at each player’s career, followed by my thoughts and pick on which players is greatest wide receiver in Pittsburgh Steelers NFL betting history. 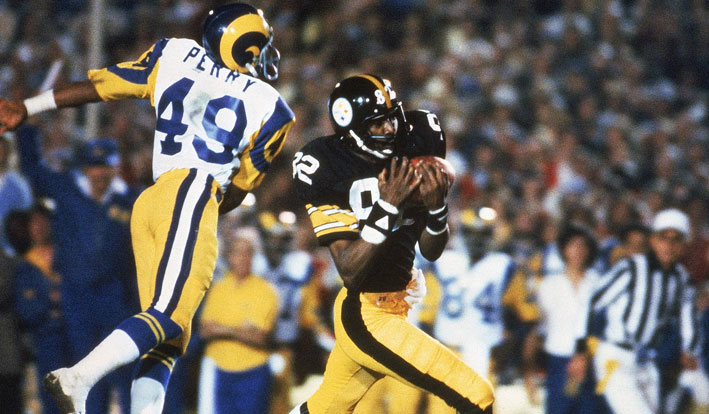 John Stallworth was born on July 15, 1952, in Tuscaloosa, Alabama and played for college football at Alabama A&M before becoming the Pittsburgh Steelers fourth round draft (82nd overall) pick in 1974.Blessed with excellent speed and great leaping ability, Stallworth became a starter in his second season with the Steelers and held that starting job for the remainder of his 165-game career.Stallworth compiled several impressive career statistics in Pittsburgh, catching 537 balls for 8,723 yards and 63 TDs. His 537 receptions were a franchise record that stood until it was surpassed by Hines Ward in 2005.Stallworth suited up for Pittsburgh in six AFC championships and helped the Steelers to dominate the 1970s by winning four Super Bowls titles. Stallworth also played in four Pro Bowls and was selected as the Steelers’ two-time, team MVP.In Super Bowl XIII, Stallworth hauled in a then, record-tying 75-yard touchdown pass from Terry Bradshaw and finished the game with three catches for 115 yards and two touchdowns in Pittsburgh’s exciting 35-31 win over the Dallas Cowboys.  At Super Bowl XIV just one year later, the Steelers were trailing the Los Angeles Rams 19-17 early in the fourth quarter when Bradshaw dropped back and heaved a long pass to Stallworth who beat cornerback Rod Perry and took the pass to the ‘house’ for a 73-yard touchdown that would pave the way for Pittsburgh’s 31-19 win and fourth NFL championship. Stallworth finished the game with three receptions for 121 yards and his remarkable touchdown catch landed him on the cover of Sports Illustrated.Stallworth holds the Super Bowl records for career average yards per catch (24.4 yards) and single-game average, (40.33 yards in Super Bowl XIV). He had 12 touchdown receptions and a string of 17 straight games with a reception in postseason play. Stallworth led the AFC with a career-high 1,395 yards on 80 receptions in 1984, when he was named the NFL Comeback Player of the Year. Stallworth was inducted into the Pro Football Hall of Fame in August of 2002. 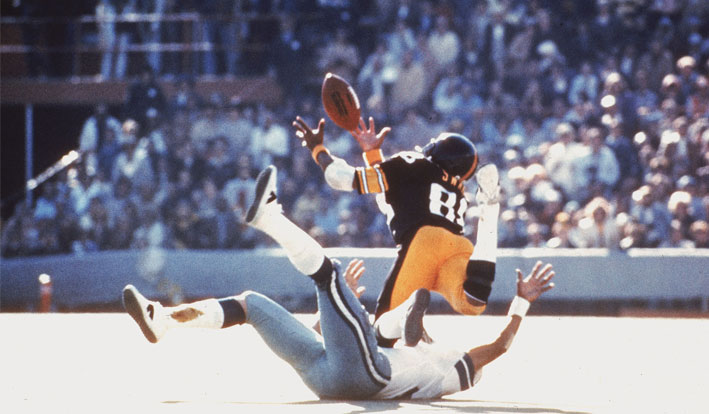 Lynn Swann was born on March 7, 1952 in Alcoa, Tennessee and was an All-American at the University of Southern California before being selected by the Pittsburgh Steelers with the 21st overall pick in the 1974 NFL Draft.Although Swann never recorded more then 880 receiving yards in a single season, his nearly unrivaled ability to make tough catches and turn in clutch performances were vital to the Steelers’ success in the 1970s and remains virtually unmatched in NFL postseason history.As a rookie, Swann led the NFL with 577 punt return yards, then a franchise record and the fourth most in NFL history at the time. The following season became one of the highlight seasons of Swann’s career as he nabbed 49 passes for 781 yards and a league-leading 11 touchdowns.In the 1975 AFC title game against the Oakland Raiders that season, Swann suffered a severe concussion that forced him to spend two days in a hospital. Still, the acrobatic wideout surprised many football fans by returning to play in Super Bowl X. Not only that, but Swann recorded four catches for a then, Super Bowl record 161 yards and one touchdown while helping Pittsburgh to a 21-17 win while becoming the first wide receiver in league history to earn Super Bowl MVP honors.  Two seasons later, Swann and the Steelers reached Super Bowl XIII and Swann once again had an outstanding performance, catching seven passes for 124 yards while scoring the game’s final touchdown for Pittsburgh in their 35-31 win over the Dallas Cowboys, Pittsburgh’s Super Bowl opponent for the second time during the decade.The Steelers made it back to the Super Bowl again in 1979 and for the third consecutive time, Swann’s fingerprints were all over Pittsburgh’s title win as he hauled in five passes for 79 yards and a touchdown in the Steelers’ 31-19 win over the Los Angeles Rams in Super Bowl XIV. Overall, Swann recorded 364 receiving yards and 398 all-purpose yards in his three Super Bowls, which were both Super Bowl records at the time.Swann retired following the 1982 season with 336 career receptions for 5,462 yards and 51 touchdowns. He also rushed for 72 yards and gained 739 yards and a touchdown on punt returns. Swann was selected to the Pro Bowl three times (1975, 1977 and 1978) and was selected to the 1970s all-decade team.Swann was elected to the College Football Hall of Fame in 1993 and the Pro Football Hall of Fame in 2001. 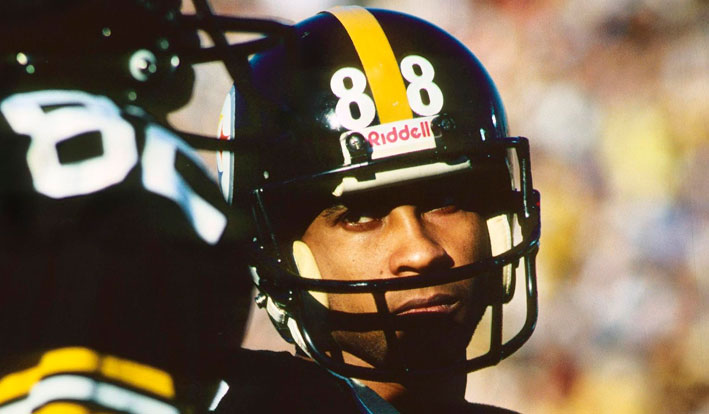 My Pick: I know John Stallworth was an absolutely fantastic wide receiver in his own right, but for me, I’ve always been partial to more athletic receivers that can jump through the roof and make spectacular grabs in traffic like Lynn Swann did for the duration of his career.Both players could make the long catch down the field, but I fully believe that Lynn Swann was a much better receiver on patterns that crossed the middle of the field and put wide receivers in the middle of dangerous defensive traffic.Again, I always liked John Stallworth and I know that his Hall of Fame career speaks for itself, but for me, I’m a Lynn Swann guy and I guess I always will be – unless we’re talking his stint in politics that is.The Pick: Lynn SwannSources:NFL.comhttp://www.nfl.com/player/johnstallworth/2526360/profilePro-football-reference.com: http://www.pro-football-reference.com/players/S/SwanLy00.htm
Older post
Newer post