NFL News and Rumors
If you’re a football fan or passionate NFL betting aficionado that wants to know what lies ahead for veteran signal-caller Philip Rivers and the San Diego Chargers (9-7 SU, 7-9 ATS, 7-9 O/U) as they get set for the upcoming 2015 season, then you’ve come to the right place!Rivers and the Chargers are on the clock thanks to this mybookie.ag original analysis on the top five questions surrounding San Diego heading into training camp.Can the Bolts stop the run in 2015?San Diego finished the 2014 regular season ranked a dismal 26th against the run (124.1 ypg), but I think they’ll be a bit better in that area in 2015 after drafting four rookies that could all stick at their respective positions while providing more depth.Not only that, but the Bolts will also be a bit better against the run because of the maturation of young, front-seven players like linebacker Manti Te’o and defensive lineman Ryan Carrethers among others. I think a jump to the middle of the pack against the run sounds realistic.

Is Melvin Gordon the answer at running back?Hell yeah!Maybe it’s me, but I thought Melvin Gordon and not Todd Gurley, should have been the first running back taken in the 2015 NFL Draft, but hey, the St. Louis Rams’ loss will turn out to be the San Diego Chargers gain in my estimation.San Diego needs a quality running back to help compliment the potent passing attack that opponents ultimately focused on last season once the Bolts were forced to abandon their run game.A year ago, I thought the Chargers were wise to acquire former Colts running back Donald Brown in free agency. Unfortunately, Brown struggled tremendously in averaging a pitiful 2.6 yards-per-carry in 13 games – and let me not even get started with former starter Ryan Matthews whose oft-injured tenure with the tam finally came to a conclusion this offseason.The Chargers finished 30th in rushing by averaging a disgraceful 85.4 rushing yards per game. No matter, I expect Melvin Gordon to fix that as soon as he overtakes current listed starter Branden Oliver.Gordon rushed for an amazing 2,587 yards and an equally remarkable 27 touchdowns for Wisconsin in 2014 while averaging a jaw-dropping 7.5 yards per carry. I genuinely believe he’s going to turn out to be a special player in the NFL for years to come while helping the Chargers immediately improve their rushing attack. 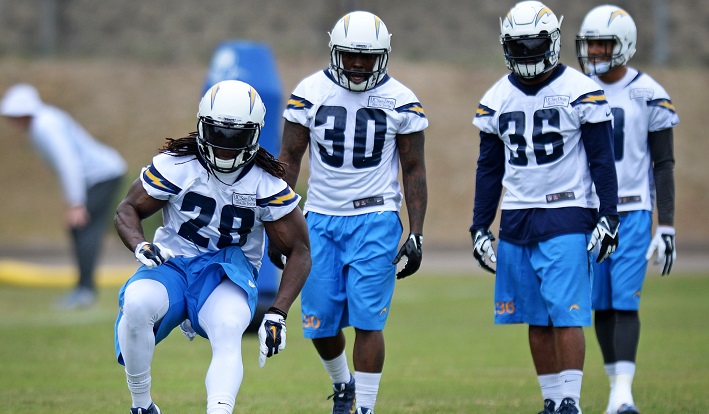 Who’s playing defense?While the Chargers struggled to stop the run in 2014, the Bolts’ pass defense was absolutely stupendous.San Diego finished fourth overall against the pass (214.2 ypg), with Pro Bowl safety Eric Weddle and Pro Bowl-caliber cornerback Brandon Flowers leading a talented secondary that routinely bottled opponents [assign attacks no matter how potent they were.The Chargers added veteran cornerback Patrick Robinson to add depth and re-signed Flowers to a new, four-year deal. San Diego is really expecting a lot from athletically-gifted linebacker Jeremiah Attaochu, former Notre Dame star, Te’o and still-young veteran Melvin Ingram as they enter their second and third and fourth seasons respectively.Overall, I’d say the Bolts have one of the best young groups of athletic defensive players in the league right now, particularly at linebacker and in the secondary.How much gas does Antonio Gates have left in the tank?Let me start by saying that, if Antonio Gates never plays another down in the NFL, he’s a sure-fire first ballot Hall of Fame inductee no matter how you slice it.This past season, in Week 7, Gates passed one of my all-time favorite receivers in former Chargers superstar Lance ‘Bambi’ Alworth to become the Chargers’ career leader in receiving yards. 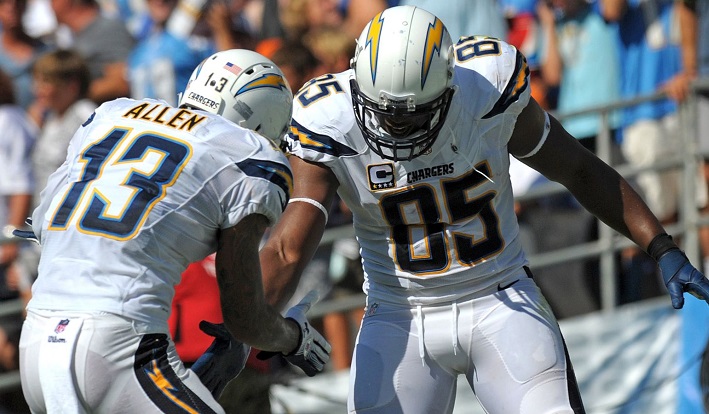 In San Diego’s regular season finale, Gates became just the fourth tight end in NFL history to surpass 10,000 career receiving yards. Gates finished the season with a solid 69 catches for 821 yards and a stellar 12 touchdowns, in the process, becoming just the fourth player in league history to catch 12 or more touchdowns in a season at age 34.Having said all of this, it’s also evident that San Diego’s 2014 Offensive Player of the Year is now 35-years-old and slowing down despite his fine 2014 campaign.If young tight end Ladarius Green can get back to looking like the exciting prospect he was two seasons ago, that would help San Diego immensely in 2015 and beyond. Green was supposed to be headed toward ‘breakout’ status in 2014, but ended up with just 226 receiving yards after getting 376 yards as a second-year player in 2013. Antonio Gates is still very good, but again, he’s also 35-years-old and in need of fewer minutes at this stage of his career.Can Philip Rivers do any more?Like what…put on a cape and start flying around?Seriously, Rivers and the Bolts passing attack were both pretty good in 2014 and they certainly weren’t to blame for San Diego’s shortcomings last season.Rivers ranked eighth in passing yards (4,286) and the Bolts finished 10th overall in passing as a team. Along the way, the veteran signal-caller completed an impressive 66.5 percent of his passes while tossing 31 touchdown passes and 18 interceptions to finish with a fine quarter aback rating of 93.8I see no reason why Philip Rivers won’t have another successful personal campaign – and who knows, with just the 16th toughest schedule in the league in 2015, (132-123-1, .518) the Chargers could really surprise.Sources:ESPN.go.com (http://espn.go.com/nfl/player/_/id/14926/melvin-ingram)NFL.com (http://www.nfl.com/player/philiprivers/2506121/profile)
Older post
Newer post