NFL News and Rumors
If you’re looking to increase your chances of cashing in on the Tennessee Titans and their NFL betting lines as they navigate their way through the remainder of the 2015 NFL preseason and into the regular season, then you’re going to need to gather as much information about the rebuilding Titans as possible and that’s where I come in.You see, I’m going offer up three expert insights on the Titans following their entertaining 31-24 Week 1 preseason loss to Atlanta that could go a long way toward helping you cash in on Tennessee all season long. With that said, let’s get started.

Mariota can get on with career after first practice interception – http://t.co/4BZNyyRPRK pic.twitter.com/qKppsrOfMh

Mariota is going to be Mari-ok!

Sure, Titans prized rookie quarterback Marcus Mariota got off to a horrendous start in tossing a costly interception on his first drive and fumbling on his second drive, but I really liked the way the No. 2 overall pick in the 2015 draft bounced back from his early miscues.“I just kind of shrugged it off,” Mariota said. “I figured we needed a good drive, and we finished with a good one.”Mariota completed two nice 17-yard passes to wide receiver Harry Douglas and a 26-yarder to running back Antonio Andrews to set up a 6-yard rushing touchdown by veteran running back Dexter McCluster.“We obviously had a tough start,” said Titans coach Ken Whisenhunt. “We can’t turn the ball over. … It was disappointing, but I like the way they responded.”Mariota finished the game 7-for-8 for 94 yards and showed me exactly what I expected.  That’s he’s a cerebral young signal-caller that is going to need time to adjust to the nuances of the NFL and being under center again after playing almost exclusively in Chip Kelly’s no-huddle, up-tempo offense.

Um…maybe it’s me, but I’m thinking the Titans made a mistake by drafting Mariota when they clearly have another young quarterback that looks like he’s a bit further along than him and one that has far superior arm strength. 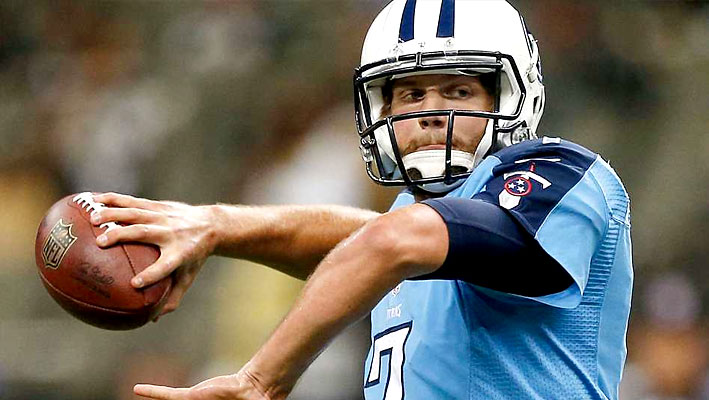 I thought Mettenberger was fantastic in completing 8 of 11 passes for 129 yards with one touchdown and one interception and again, I think he made a statement that he wants to be involved in a legitimate battle for the starting job.Now, I’m not sure if the Titans are even entertaining the idea of letting Mettenberger challenge Mariota for the starting job, but I know that I would. Either way, this is a no-lose situation for Tennessee in the sense that they don’t have to trade Mettenberger right away, although I would probably pull the trigger if the right deal came along.

Points-a-Plenty in 2015 and favoring Betting Odds?

Tennessee ranked a dismal 30th in the league in scoring a year ago by averaging just 15.9 points per game while playing Under their O/U Totals 10 times in 16 regular season games despite also ranking 29th in points allowed defensively (27.4 ppg).I’m going on record right now to say that I don’t think that’s going to be the case for Tennessee in 2015 as I suspect they’ll score their fair share of points this season – while still giving up far too many defensively.After seeing their preseason opener, I’m thinking the Titans are going to play Over the Total more often than not this coming season.
Older post
Newer post