NFL News and Rumors
No matter what age you may be, if you’re a serious NFL betting follower, then you almost assuredly know something about legendary Hall of Fame running back Gayle Sayers.While former running back Terrell Davis may not be the household name that Sayers always will be, the former Denver Broncos superstar ha a career that nearly mirrored that of Sayers, even if he isn’t quite remembered in the annals of league history they way Sayers is.Nevertheless, both players had very similar careers, making them perfect candidates for this mybookie.ag NFL comparison column original. With the NFL offseason dragging along and pro football fans and bettors in need of some sort of a fix, this fun-filled comparison on the careers of Sayers and Davis will be just what the doctor ordered.Sayers’ gridiron genius earned him a place in the Pro Football Hall of Fame while Davis’ special abilities helped the Denver Broncos win consecutive Super Bowl titles in 1997 and 1998. My question now, is simple. Which fleet-footed running back was the better player?Let’s take a look at the careers of both players before I make my selection. 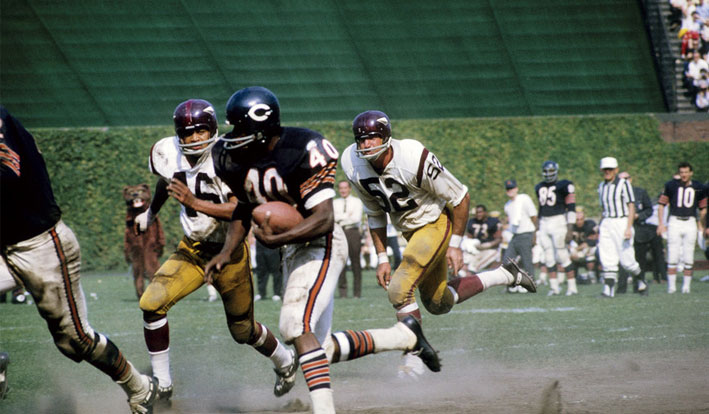 Gale Sayers was the fourth overall pick in the 1965 NFL Draft and immediately burst upon the pro football scene like he invented the game. Sayers’ rookie season was absolutely dynamic right from the very start. In his first preseason action, Sayers recorded a 77-yard punt return and a 93-yard kickoff return before shocking everyone by tossing a 25-yard scoring pass against the Los Angeles Rams.During the regular season, Sayers scored four touchdowns in one game against the Minnesota Vikings including a 96-yard game-breaking kickoff return. Overall, he rushed for 867 yards and a stellar 5.2 yard average.In the next-to-last game of his rookie season, Sayers put on a show for the ages – all while playing on a muddy field no less. Sayers scored a record-tying six touchdowns against the San Francisco 49ers including a sensational 80-yard reception, a 50-yard TD jaunt and a 65-yard punt return. For his rookie season, Sayers scored 22 touchdowns and racked up a whopping 132 points, both, then-rookie records.In spite of his nearly unmatched talent, Sayers was a quiet and unassuming man that wasalways ready to compliment a teammate for a key block or good play. In 1966, Sayers rushed for 1,231 yards and a 5.4-yard average. Sayers continued to shine in 1967, averaging 4.7 yards per carry and well into the 1968 season. Then, in the ninth game that season, Sayers suffered a knee injury that required immediate surgery. After a tortuous rehabilitation program, Sayers came back in 1969 to rush for 1,032 yards to earn the league’s Comeback Player of the Year honors that season.Unfortunately, Sayers was never the same after his initial knee injury and more injuries continued to take their toll on arguably the most elusive running back in league history and just before the 1972 season, Sayers decided to hang his cleats up.In his relatively brief career, Sayers left an impression on the game that can never be forgotten. His career totals show 4,956 rushing yards and a jaw-dropping 9,435 combined net yards, not to mention, 336 points scored.At the time of his retirement, Sayers was the NFL’s all-time leader in kickoff returns. The Bears legend also garnered All-NFL honors five consecutive years and was named Offensive Player of the Game in three of the four Pro Bowls in which he played. 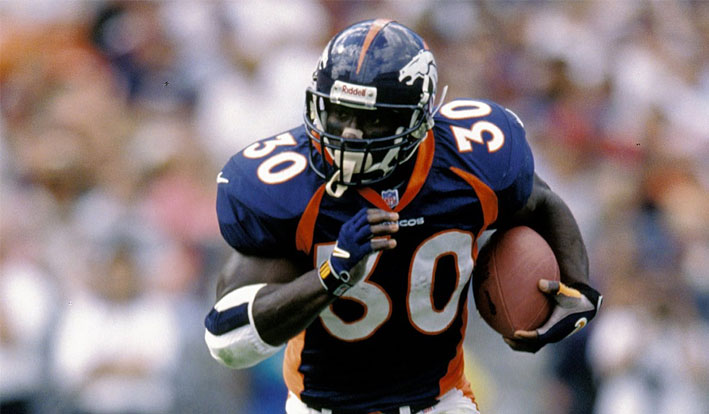 Terrell Davis played running back for the Denver Broncos from 1995 to 2001 after being drafted in the sixth round (196th pick overall) of the 1995 NFL Draft following his four-year stint as the University of Georgia, where he played backup to starter and former NFL back Garrison Hearst.In Davis’ rookie season, he rushed for 1,117 yards to become the lowest drafted player in league history to rush for over 1,000 yards in his rookie year. Davis really set the league on fire over the next three seasons, leading the league in rushing each time. Denver’s all-time great rushed for a stellar 1,538 yards in his sophomore season, 1,750 yards in his third season – and a jaw-dropping 2,008 in just his fourth season.It was Davis – and not an aging John Elway – that was Denver’s driving force behind their consecutive Super Bowl wins in 1997 and 1998. In Denver’s first Super Bowl victory over the Green Bay Packers in Super Bowl XXXII, Davis rushed for 157 yards while adding three rushing scores to become the first player in Super Bowl history to ever rush for three touchdowns. The performance also earned him MVP honors and he followed that up by winning the league’s MVP award in 1998.Unfortunately, it was during this Super Bowl run, that it was discovered that Davis also suffers from often severe migraine headaches, one of which plagued him during Denver’s second title game appearance. In 1998, Davis rushed for 2,008 yards, then the third highest rushing total in NFL history.. The Broncos beat the Atlanta Falcons in Super Bowl XXXIII, with Davis recording 102 rushing yards and 50 receiving yards. 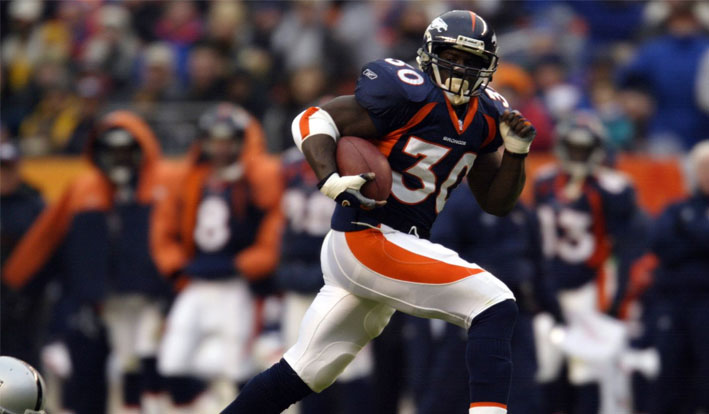 Super Bowl XXXIII ended up being the last postseason game Davis would play in. In his eight postseason games from 1996 to 1998, Davis compiled a mind-numbing 204 carries for 1,140 yards and 19 touchdowns, along with 19 receptions for 131 yards. Davis had a postseason streak of seven consecutive games with over 100 rushing yards, all of which the Broncos won, breaking the previous record for consecutive 100 rushing yard postseason games held by John Riggins (6).Terrell Davis was nominated to the Pro Bowl in the 1996, ’97, and ’98 seasons. Nicknamed “TD,” Davis popularized the “Mile High Salute,” a military-style salute given to fans and teammates in celebration of a touchdown.After the 1998 season, Davis was plagued with injuries and saw action infrequently. In 1999, he tore his anterior cruciate and medial collateral ligaments (ACL an MCL) while trying to make a tackle on an interception thrown against the New York Jets. In 2000 and 2001, Davis racked up numerous foot and leg injuries and retired during the 2002 preseason.Through his first four seasons, Davis rushed for a stunning 6,413 yards and 56 touchdowns. Among the 24 modern-era Hall of Fame halfbacks and fullbacks, only Earl Campbell (6,457) and Eric Dickerson (6,968) had more rushing yards during their first four seasons while no member of the Hall of Fame matched the 56 touchdowns that Davis recorded in his first four seasons.Overall, Davis finished his seven NFL seasons with 7,607 rushing yards, 169 receptions for 1,280 yards, and 65 touchdowns (60 rushing and 5 receiving). Davis is the Broncos’ all-time leading rusher and is also one of two Broncos (the other being John Elway) to be named league MVP. Davis arrived on the ballot for the 2007 Hall of Fame selection – and is currently a finalist to be inducted into the Pro Football Hall of Fame in 2015. Personally, I think it’s a travesty that he hasn’t been inducted already.  My Pick: I never saw Gale Sayers play live, (I was thisclose) but I am convinced that he was literally, in a class of his own. Don’t get me wrong, by no means whatsoever was Terrell Davis chopped liver and again, I believe he should have already been inducted into the Hall of Fame, but for me, Gale Sayers, (next to Barry Sanders), was the most elusive running back of all-time and a player that could beat you in more ways than anyone not named Walter Payton.Not only was Gale Sayers a threat to score every time he touched the ball from his running back position, but he was also one of the greatest return men in NFL history and could throw the ball better than some of today’s confused signal-callers. In closing, I’m going to give Sayers the nod over Davis in a close, close call.The Pick: Gayle Sayers Sources:ESPN.com: http://espn.go.com/nfl/player/stats/_/id/790/terrell-davisNFL.com: http://www.nfl.com/player/galesayers/2524970/careerstats
Older post
Newer post