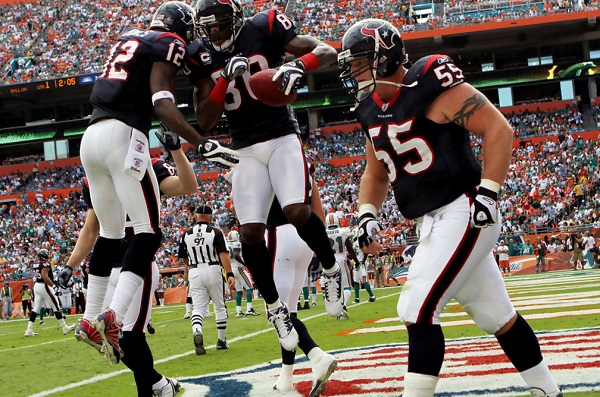 NFL News and Rumors
Week 3 of the pro football season was compounded with very close betting calls, some surprising scores, routine victories and injuries that could impact the NFL game lines for the coming week.It also brought some disappointments, however, the weekend action was one of the most entertaining of the year so far, but for those who missed out the games, here are some of the biggest highlights:-The Arizona Cardinals improved to 3-0 with a win over the 49ers.-The Philadelphia Eagles became the first team in NFL history to win their first three games after trailing by 10 points.-The Seahawks needed OT to do beat the Denver Broncos in a rematch of Super Bowl XLVIII.– Only three teams remain undefeated after 3 weeks.Now, there’s still one game left before we close Week 3, but having in mind that Week 4 is just around the corner and that with it comes a myriad of betting opportunities, it is time to revise some of the best odds and games entering Week 4.

The Carolina Panthers are coming off a home loss to the Pittsburgh Steelers on Sunday night that snapped their 2-0 season start, and need to bounce back to maintain their post season aspirations alive. Meanwhile the Ravens are coming from a last minute win over the Cleveland Browns, but despite the domestic violence scandal surrounding Ray Rice, the team looks more solid now than ever, which opens the chance for a great match.Game Odds:PANTHERS: +2½+110, OV 40 ½, ML -110RAVENS: -2½-130, UN 40 ½, ML -110Pick: Baltimore Ravens.

The Philadelphia Eagles are one of the few undefeated teams in the NFL after three weeks of action. The team have soared to a 3-0 start to begin the season in great fashion. But they will put their record on the line when they take the road to face the San Francisco, who will do whatever it takes to overturn their 1-2 record and claim the win at home.Game Odds:EAGLES: +4½-110, OV 50 ½, ML -11049ERS -4½-110, UN 50 ½, ML -110Pick: San Francisco 49ers.

Despite the loss to the Chargers on Week 3, the Buffalo Bills still one of the biggest surprises of the season so far. The Bills face a tough schedule in the coming weeks, and with two games vs Houston and Detroit on the road, the team need to score at least one more victory and get back home with a positive record before they enter a huge divisional matchup against the New England Patriots.The situation is similar for the Houston Texans, who will try to get back on track after falling to the dismal New York Giants. The team didn’t show its best face against New York, but considering that Houston is usually better at home, chances are the Texans get the job done, cover the NFL spread and cement theirselves atop of the AFC South.Game Odds:BILLS: +3+105, OV 41, ML -110TEXANS: -3-125, UN 41, ML -110Pick: Houston Texans.
Older post
Newer post