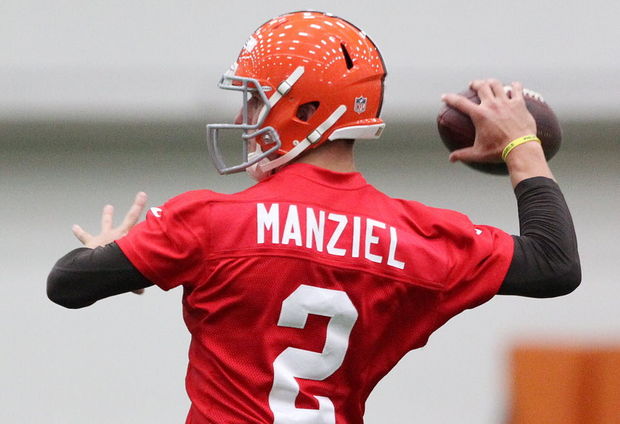 NFL News and Rumors
There’s something about Johnny Manziel that really makes him resonate fans. Of course, he had a tremendous college football career with Texas A&M, we all know he’s skilled, but there’s also a unique, hard-to-put-into-words quality about him that really makes him stand out. But the question here is: Is he really a game changer? Will he lead the Browns to the NFL postseason? Can he improve his team’s chances or have an impact on the existing football betting odds? Still a bit early to get an idea, but his popularity was on full display during his debut game with the Cleveland Browns. The stadium was filled with fans wearing his number 2 jersey. Fans eagerly awaited Manziel’s debut. It wasn’t guaranteed, but the coaching staff told reporters earlier that they wanted to work Manziel into the lineup. They recognized that he provides a unique playing style that they can utilize on certain plays. Now, not everybody wanted to see what Manziel is capable of on the field, in fact, Browns starting QB Brian Hoyer didn’t seem too eager to share his position with the rookie quarterback. After leading his team to a comeback win over New Orleans on Sunday, Hoyer admitted he was a bit mad when he found out that the team would be using a Johnny Manziel package against the Saints. Hoyer was out for just three plays, and at the end he seemed like he was o.k with the decision.

Is Manziel Ready for some NFL Prime time?

Manziel was in the game for all of three plays against New Orleans and it was a boring three plays: Johnny Football went 0 for 1 with no interceptions and zero rushing yards in Cleveland’s 26-24 win. The fans were not disappointed. They screamed and yelled when the young player made his way onto the field. On the other hand bettors feel that his debut wasn’t something for the history books. It consisted of two plays in which he handed the ball off to a running back and one passing play, and that isn’t really a hint of what he’s capable of. During one play he scrambled to his left and threw the ball. His pass was accurate, but the receiver dropped it. While his impact was minimal, fans still appreciated seeing him play his first NFL game. We expect to see the Browns use him more as the season progresses and they determine where he fits in the team. While Manziel only made a very small impact on the game, that hasn’t kept reporters and fans from eagerly discussing his debut. What is really impressive is how popular the young player is so early in his career. He may be destined for greatness, but In the meantime, he will have to ride the bench. We’re sue he will have to put in time and effort before he can expect to compete effectively in the NFL. These short bursts of playing time will allow him to get the experience he needs in order to play a bigger role in the league. It’s unclear how long it will take for Manziel to get accustomed to the new style of play of the Cleveland Browns. He struggled during the preseason, but early football predictions projected him as a great candidate for the starting position, something that hasn’t happened so far. However, quarterbacks struggle when they first arrive at the NFL. so we expect that he will mix much better with the team in the months and years to come. We have to wait to see more of Johnny. Even in short bursts, watching him play are an exciting experience. He definitely provides a much needed spark to Cleveland’s offense, but he need to explode and get sharper if he really wants the starting gig. Cleveland will play the Baltimore Ravens on Sunday, September 21st at FirstEnergy Stadium. With or without Manziel, the Browns are 2 point underdogs according to the current football betting odds listed on mybookie.ag.
Older post
Newer post