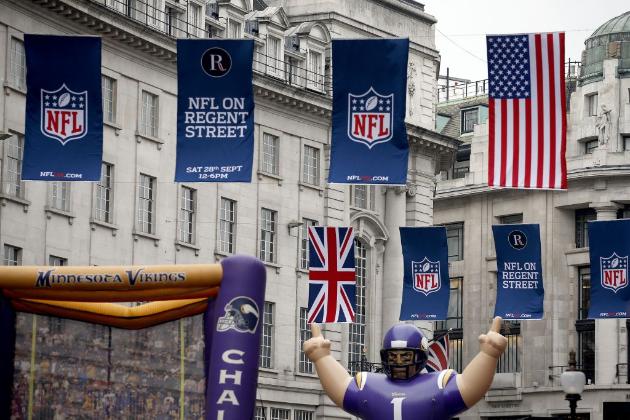 NFL News and Rumors
While the Dolphins had some fun swimming all over the Raiders in their 38-14 win at the Wembley Stadium, London, Mark Waller was busy speaking in a nearby hotel about the logistical possibilities of having more than an occasional NFL Game in the UK. This season, three pro football matches have been featured at Wembley Stadium, which is a commendable improvement considering that, apart from last season’s two games, the past six years have seen only one game per season played at the iconic London Stadium. However, Waller, the head of international expansion in the NFL’s New York headquarters, said that even though the tickets for all NFL International Series games played in England have been sold out (with exception of the Chicago vs. Tampa game in 2011 that was hampered by delayed ticket sales); “there are a whole set of logistical implications for the players, coaches, back-office staff and so on” in order to permanently relocate an NFL team to the UK. Because of such reasons, English fans will have to wait until 2021, or thereabouts, for full relocation plans to be completed, said Waller. The Englishman, born of a Welsh mum and an English dad, further noted that some of the NFL teams which have a plausible chance of being relocated to the UK include the Jaguars, the Raiders, the London Chargers, and the Rams. In fact, the Jaguars are owned by Fulham owner Shahid Khan while the Rams have Arsenal’s Stan Kroenke. The ties of these NFL teams with the business moguls who have London sports franchises makes it quite easy for the relocations to happen. Even more importantly, NFL researchers indicate that there is an ever-growing interest of UK people on NFL. For example, 2.8 million people in UK are reported to consider themselves as immensely interested in the NFL. In addition, 4 million people in the UK watched Super Bowl and over 40, 000 people (of 16 years and above) play football, which is twice the number four years ago. Such encouraging statistics are enough-proof that, with the right investments and better advertisements, NFL can be big in the UK just like it is in the United States. Despite the negative publicity that has often bombarded the National Football League, it is still the most profitable sporting league in America, with its annual profits doubling the revenues from the reputed English Premier League. Rodger Goodell, Waller’s boss noted “we’ve got passionate fans in the UK” and “our ownership understands that this is a market we need to be more active in”. Additionally, Sky Sports announced this week that they will show five NFL games every week, starting next season, in addition to improving participation rates and viewing figures. So, even though Waller duly noted that “there is a lot still to be done, because any team we put here has to be competitive’, it is clearly evident that there is already a lot of goodwill from various stakeholders. Therefore, though it is important to think through all the expansion plans and logistics, the relocation initiatives should be completed sooner, rather than keeping the English-based fans waiting for seven years to enjoy action-packed matches in their own backyard and take NFL bets on their own team.
Older post
Newer post