NFL News and Rumors
If you’re looking to boost the annual NFL betting bankroll, then you should know that Sunday’s week 14 pairing between the Detroit Lions and St. Louis Rams is offering as much value as any contest on the Week 14 schedule.Now, let’s find out why!

Jim Caldwell will have his final press conference before #DETvsSTL at 10:30 AM. Watch here: https://t.co/X47bnfTOLH pic.twitter.com/x0aUks4U7i

The Lions were on the wrong end of an Aaron Rodgers Hail Mary as they fell just short of sweeping the Packers by losing to Green Bay 27-23 on the game’s final play.“All I saw was the dude catching the ball,” Lions cornerback Darius Slay said of the final play. “Limited words, I don’t know what to say. I’m just in shock mode.”“When they were awarded the extra play, it kind of hit me,” Lions running back Ameer Abdullah said. “I was like, ‘Really?’ I know how the Hail Mary stuff goes. Nowadays, it’s more probable that they catch it than it gets batted down.”Still, Detroit has rebounded nicely after getting off to a dismal 1-7 start this season.“We’ve been through a real rough patch,” Lions head coach Jim Caldwell told reporters. “It was real tough – to get a team to hang in there together and to focus and get it turned around where they’re playing consistently, I think in itself, is a lot more difficult than what you’re talking about because I think it’s over a long span of time.”Now, the Lions hope to give their faint playoff hopes a slight boost by taking out the struggling Rams and the forecast looks great with quarterback Matthew Stafford tossing nine TD passes and just one interception in his last four games. Stafford tossed two touchdowns and no picks against the Packers last weekend. 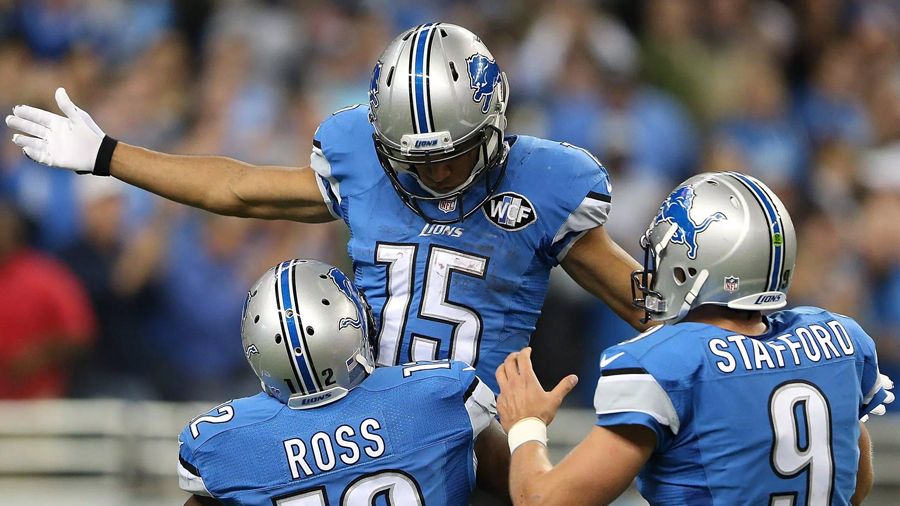 The Rams have lost five straight and got smacked around like a bunch of kids on their humbling 27-3 loss to Arizona last weekend while never coming close to covering the spread as a 3.5-poin t home dog.Quarterback Nick Foles completed just 15 of 35 passes for 136 yards with no touchdowns and one interception while completing just one of 11 third down passes.“I have to be positive about it,” Foles said. “I respect coach Fisher. There is so much I wish I could have done to change what happened today, but the sun will come up tomorrow and I’ll work as hard as I can to help us win next week.”Gifted rookie running back Todd Gurley was limited to 41 yards on nine carries, but got 34 of those yards on his first run of the second half.“We’re all disappointed and frustrated right now,” Gurley said.The Rams also allowed Carson Palmer to throw for 356yards and two scores. St. Louisranks 31st in scoring (15.4 ppg) and will likely turn back to veteran Case Keenum to start this contest.“To have the opportunity like this, obviously it’s a tough part of the season, but honestly, I’m not looking at what’s happened,” Keenum told reporters. “I’m not looking ahead, I’m looking at today and how did practice today go.”The Rams relieved offensive coordinator Frank Cignetti of his duties shortly after their loss to the Cardinals and promoted tight ends coach Rob Boras to the position.“It was, in my estimation, time to move in a different direction,” Rams coach Jeff Fisher told reporters. “Our focus is on the future of this offense, the future of this football team, and I felt like this was the best thing we could do.”