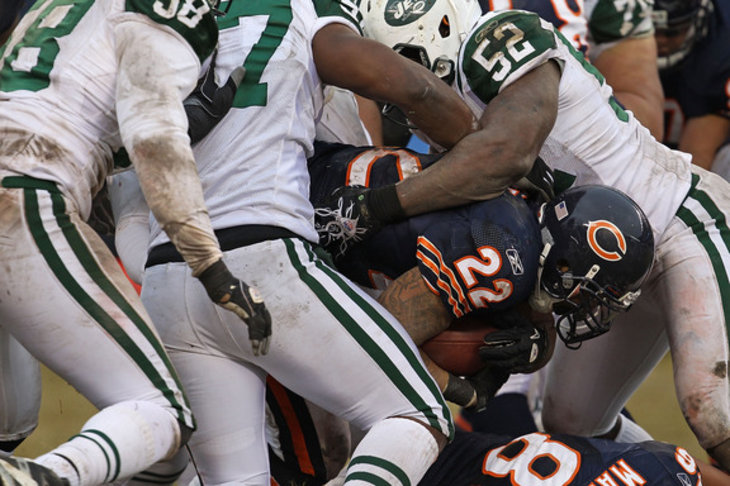 NFL News and Rumors
Monday Night Football is almost upon us once more, and this week’s matchup is one that could set the tone for the season for both teams involved. The New York Jets and Chicago Bears both come in at 1-1, with both looking to tip the balance back towards the win column. It’s a game which, on paper at least, looks too close to call. That is reflected in the football betting odds, with the Jets a 2.5-point favorite, more than likely because they are playing at their home stadium.The Jets started out with a 19-14 win over Oakland before giving one away at home to the Green Bay Packers. The Bears lost in Week 1 to the Bills, a team that is looking better than many believed it would be. They followed that up by surprising the San Francisco 49ers on the road to balance their record to 1-1. The Bears have been relying the air attack, while the Jets have been pounding the rock on the ground, so expect this game to be a tight one.

Both teams are 1-1 against the spread in their first two weeks of the season, as well as both being 1-1 on the OVER/UNDER. Things get a little clearer if you look at the head to head stats of this pair. Going back to 1992, Chicago is 4-1 ATS and 4-2 Straight Up against the Jets, with 5 of the 6 games falling on the side of UNDER.Furthermore, when the games are played in New York, the Bears are 2-0 ATS and 2-1 SU, with all three of the games being UNDER. Neither team is particularly lighting it up on offense, which make the 45.5 total point number seem spot on.

WHERE SHOULD THE MONEY GO

If you take a look at the history, the smart money would definitely appear to be on the UNDER play. The Bears are on a high after their big win last week, which was a game where they defense created 4 turnovers. The Jets are wounded after giving away a consistent lead to the Green Bay Packers last week, and will be looking for a rebound performance that put them back on track. This looks like being a hard fought, low-scoring affair where turnovers may end up deciding the game.  Full NFL game odds for this match can be reviewed here.
Older post
Newer post