NFL News and Rumors
You would think that in this forgiving NFL world, where a child-beater such as Adrian Peterson is pardoned and a world-class cheat like Tom Brady is celebrated and slapped with a soft suspension, an apologetic and reportedly changed man like Michael Vick would at least get a modicum measure of the same sympathy. Well, in Philadelphia and New York, one would probably create some negative buzz, but get away with it. But in the Steel City, it’s a different story altogether; NFL betting fans there are real Steelers—they boastfully wear Hearts of Steel on their jerseys and have no problem with holding unnecessary grudges that date back to as long as the last time the Pittsburgh franchise won the Super Bowl (in 2008).Don’t get me wrong, I am not a fan of what Vick did with the dogfighting ring and all. His actions were utterly detestable and deserved to be condemned in the strongest ways possible. The NFL was very clear about sending a message in regards to its strictness on such felony cases, suspending Vick and fining him heavily on several counts. Meanwhile, the federal authorities also got a piece of the then-Atlanta QB, charging him on several counts and sentencing him to a three-year prison term. And it is only after losing millions of dollars and serving 21 month in prison, followed by two months in home confinements, that the QB became a free man in 2009.

Vick: A Changed Man?Vick has apologized severally for his youthful naivety, releasing several statements before, during and after going to jail. And to his credit, he’s followed up his apologies with several initiatives to discourage other people from engaging in similar felonies, literally walking the talk and becoming a clear example of how one can turn his life around. For example, he’s been in the front-line lobbying for H.R. 2492, the Animal Fighting Spectator Prohibition Act, which seeks to establish federal misdemeanor penalties for people who spectate in illegal animal fighting. On several seminars and charitable events, he’s also been an outspoken activist for human and animal rights, repeatedly asserting his remorse for his past actions.Life After the Felonies: Philadelphia and New York JetsSoon after being released from prison in 2009, Vick signed with the Philadelphia Eagles and played there for five years, witnessing a good measure of success. His 2010 season was particularly memorable, as he started 12 games, completing 62.6 percent of his passes for 3,018 passing yards and 21 passing TDs against 6 picks for a passer rating of 100.2, along with 676 rushing yards and 9 additional scores on the ground, leading the Eagles to the playoffs.For his exploits in 2010, Vick not only made his fourth Pro Bowl, but he was also named as the NFL Comeback Player of the Year by the Associated Press and Sporting News. He also won the Bert Bell Award on March 4, 2011, a year after his teammates in Philadelphia voted him the winner of the prestigious Ed Block Courage Award in 2009 for his bold decision to make it back to the NFL, despite a baggage of challenges that included relentless public ridicule and a tough financial situation that saw him file for bankruptcy. 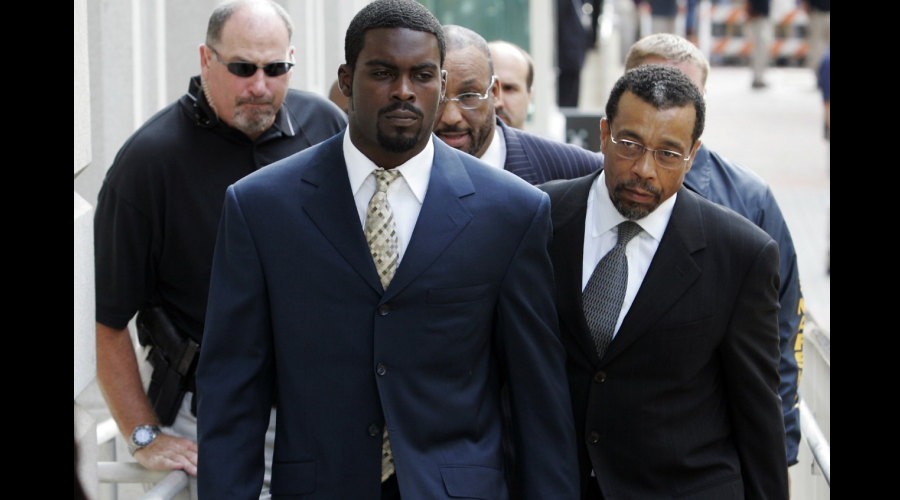 The corporate world also took notice of the Virginia Tech product and his transformed life, rewarding him with deals. His first endorsement since his release from prison was a two-year deal in 2011 with Unequal Technologies, a company that manufactures football pads. Nike also came into the picture, officially signing Vick again on July 1, 2011 after they’d dropped him when he faced felony charges. The Nike deal marked the first time a sponsor had decided to re-sign an athlete after dropping him. And even when Vick launched a sports clothing line called V7 in 2012 (with part of the proceeds going to the Boys and Girls Club of Philadelphia), there was an outpouring of support from all over the sports world, including players and organizations not related to the NFL.After his time with Eagles, the 6-feet-0 and 215-pound QB signed with New York Jets in 2014. With Geno Smith as the starter in New York, Vick mostly served as relief QB. However, after 7 straight losses with Smith as the starter, Smith was named as the starter over Smith in Week 9 against the Chiefs. The Jets lost that game 24-10, as Vick completed 75 percent of his passes for 196 yards and a TD and zero pick, earning a passer rating of 105.7. But in the week after that (Week 10), the QB (34 years old at the time) made history, as he became the very first NFL quarterback to reach 6,000 rushing yards.Vick Gets 1 over Big Ben in 2014Even more notably about the Week 10 game, (this is where those hateful Pittsburgh fans should pay attention), Vick led the Jets to a 20-13 upset win over the Steelers, the second win of the season for the New Yorkers since Week 1. In the game, Vick was 10 of 18 for 132 yards and 2 TDs with zero picks for a passer rating of 116.0, while also running eight times for 39 yards. And in case you are asking how Ben Roethlisberger performed in this game, he went 30 of 43 for 343 yards and 1 TD with 2 interceptions for a passer rating of 81.8.Following that win, Vick went on to start one more game in the season (a loss against the Bills) before Smith resumed starting duties at the center. 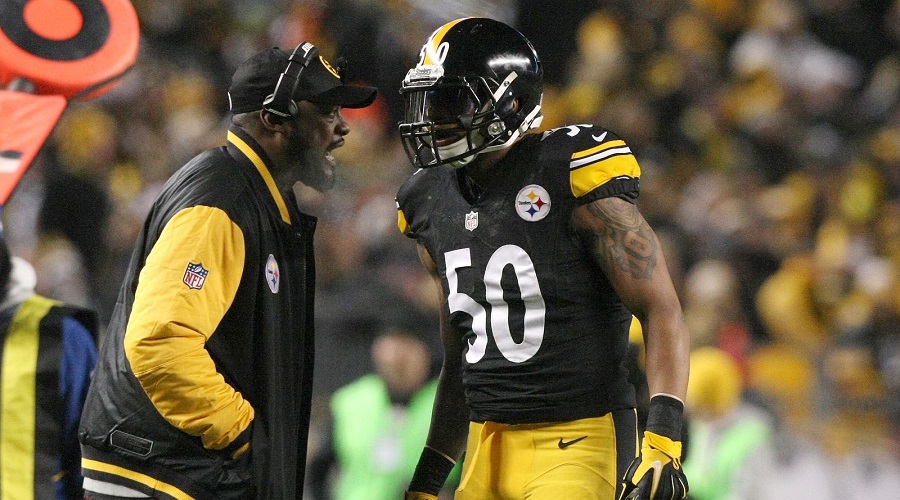 Vick Joins the Steelers and Faces a BacklashIn main, the decision for Pittsburgh to sign Vick to a 1-year deal this Tuesday was because the team’s current No. 2 quarterback, Bruce Gradkowski, suffered a hand injury against Green Bay in the Week 2 preseason game, which saw him placed on injured reserve. Of course, there is backup QB Landry Jones, who had a solid performance last week against Green Bay, throwing 10 of 19 passes for 172 yards and two touchdowns with one interception, a player many Pittsburgh fans feel would have been a better No. 2 to Big Ben. However, the general consensus in the Steelers’ front office is that Landry, a third year QB, is inconsistent and immature, so Vick and his veteran skills would be a better fit.“There’s not a throw on the field he can’t make from an arm strength standpoint,” Steelers coach Mike Tomlin commented on Vick after signing him. “He’s a very experienced guy at what he does at this point in his career and the mobility is still unique even at 35.”That viewpoint is, however, proving unpopular by the day among some Pittsburgh fans. Following his signing, a section of the disgruntled fans created a Facebook page called Pittsburghers Against Michael Vick, which had attracted a little over 14,700 likes by Thursday morning.Meanwhile, over 15,000 fans have put their name on a petition calling for the Steelers to get rid of Vick, as of Thursday Morning.And at the training camp, and Steelers reporter Chris Adamski reported yesterday that these many fans showed up outside Pittsburgh’s facility to protest against Vick. (For a man who allegedly hosted ferocious dog fights, they’ll probably need to do better than just five people). 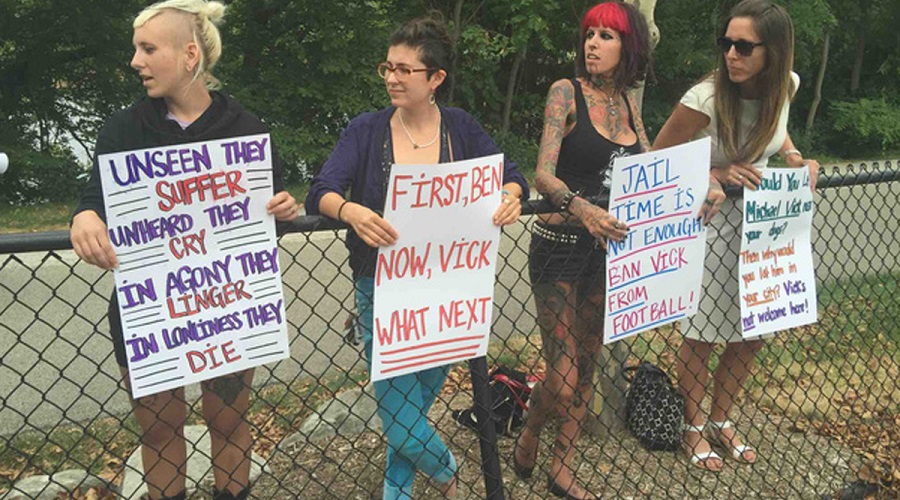 “I just try to make it right after going through what I went through, what transpired,” Vick said after his first practice with the Steelers when questioned about the unhappy fans. “The best thing to do was make amends for what I did. I can’t take it back. The only thing I can do is influence the masses of kids from going down the same road I went down. That’s why I work with the Humane Society and affecting a lot of kids’ lives and saving a lot of animals.”And when asked if the backlash bother him, he said, “I try to stay away from, that.” The QB went on to add that, “All it does is make you develop mixed emotions how you feel toward people, I don’t want to be emotionally disturbed right now. I want to be in a great place. I enjoy what I’m doing. I’m playing football and I’m going to continue to make my teammates proud and be the best football player I can be.”My VerdictIf you still feel hurt by Vick’s actions and consider them unforgiveable, then you have all the rights to feel as you do on an individual capacity. But as far as I am concerned, I think the former No. 1 overall pick has done well enough to deserve his second chance, rather than the resentment he is getting for a case that is soooo yesterday! And going by the analysis given above, many other people also believe that Vick has something worthy to offer in the NFL betting lines. It may not be much, but it is good enough to earn him a one-year deal with the Steelers after the Bills nearly signed him. And I don’t mean to rod the Steeler nation below the belt where it hurts, but Big Ben is an alleged two-time rapist, so it would be hypocritical to shift the moral compass when it comes to Vick’s case, wouldn’t it?Sources:Facebook.com (https://www.facebook.com/Pittsburghersagainstmichaelvick)Wikipedia.org (https://en.wikipedia.org/wiki/Ed_Block_Courage_Award)
Older post
Newer post