NFL News and Rumors
The San Diego Chargers were one of the biggest winners in the offseason, getting a monster of a running back in the explosive Melvin Gordon using their first round pick in 2015, while the remaining rounds of the NFL draft addressed a couple of other crucial needs in the O-line and D-line. But are the Chargers devoid of any questions or weaknesses ahead of the NFL betting season? Certainly not, at least not according to concerns below:

Who will be San Diego’s go-to Guy as the Main Inside Linebacker?

Coming off the worst season of his NFL career, Donald Butler’s job is on the line in 2015, as the Chargers selected inside linebacker Denzel Perryman from the NFL draft, a rookie with a lot of promise. The selection of Perryman also means that the Chargers are not confident in the abilities of Manti Te’o, a second-round draft who was selected for the same position two years ago, but hasn’t quite sparked the shine expected of him. The IL position is thus likely to elicit a fierce competition in 2015. It’s hard to write off Butler because his bad season was partly as a result of injury concerns, but based on the positive reports we’ve been reading about him, Te’o is likely to be the go-to guy at the position. Butler, because of his experience, will get some quality time, but as the season winds down, Perryman should be able to get his chance, which will be enough for him to push for a starting role in the 2016-17 season.

What Will Become of San Diego’s Weak Pass-rush in 2015?

It doesn’t take a rocket scientist to figure out that veteran linebacker Melvin Ingram is not a reliable pass-rusher. Meanwhile, as of the end of last season, Jeremiah Attaochu was still very raw, indicating that he can’t be trusted to frustrate opposing quarterbacks. Unfortunately, the Chargers didn’t get any players from the draft to help out in this department, so the team will have to hope and pray that Ingram and Attaochu can find some good form in the offseason.

What is the Future of Philip Rivers’ Contract with the Chargers?

San Diego’s quarterback Philip Rivers is in the final year of the six-year, $91.8 million deal he signed in 2009. In fact, Rivers will be earning a decent $15.75 million in 2015. However, in spite of his efficiency (in terms of keeping the Chargers competitive) and durability (having not missed a single game since signing the contract 6 years ago), the Chargers are yet to renew Rivers’ contract. In addition, the San Diego roster doesn’t seem to have a fledging QB to take over his position if he decides to leave after the 2015 season. If Rivers doesn’t get an extension this season, the Chargers could be in a lot of trouble at the end of the season. Even so, recent reports from ESPN indicate that the Chargers may be working on a contract for the QB, which could see him get an extension before the new season. For the sake of avoiding heartaches and a lot of head-scratching in San Diego, let’s hope that those rumors about a new contract are true. 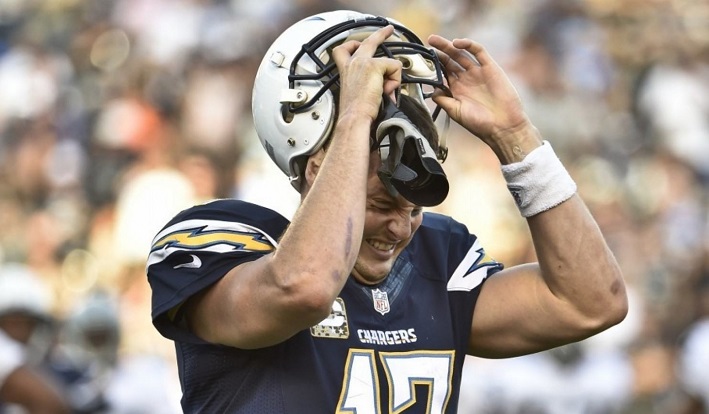