NFL News and Rumors
According to NFL commissioner Roger Goodell, the NFL is considering branching out and adding more international regular season games to the slate, in addition to the ones hosted at London’s Wembley Stadium. One of the potential sites would be Mexico City (another would be in Germany).When it comes to Mexico City, the NFL has been there before, of course. There was a regular season game there in 2005, held at the Azteca Stadium. If you’re a soccer fan, of course, you know the Azteca for being a house of horrors for teams from other countries who are trying to qualify for the World Cup – at least until the Hexagonal going into the 2014 tournament. However, NFL betting fans know the league has hosted events there too.

Why No Mexico Yet?

Since 2005, though, the NFL has stayed away, and one reason has to do with safety concerns. In 2000, the Colts and Steelers met in a preseason contest in the Azteca stadium, and Jerome Bettis’ parents did not come. This was only one of two games that his parents missed in his entire career – the other being a 1996 preseason tilt in Tokyo. At the time, Bettis told a Pittsburgh reporter that players had been told not to invite their families because of the dangerous environment in Mexico City.However, since 2005, the security situation in Mexico City has not improved significantly. The War on Drugs in that country, which began in 2006, has killed more than 80,000 people. The Mexican government, with the help of U.S. marshals, has been fighting the Sinaloa Cartel and Los Zetas syndicates in a conflict much bloodier than what one might expect from seeing the cartel episodes in Breaking Bad. While most of the violence has taken place in the border cities and in such places as Chihuahua and Baja California, the perception of Mexico as a violent place extends to NFL incursions into the capital. 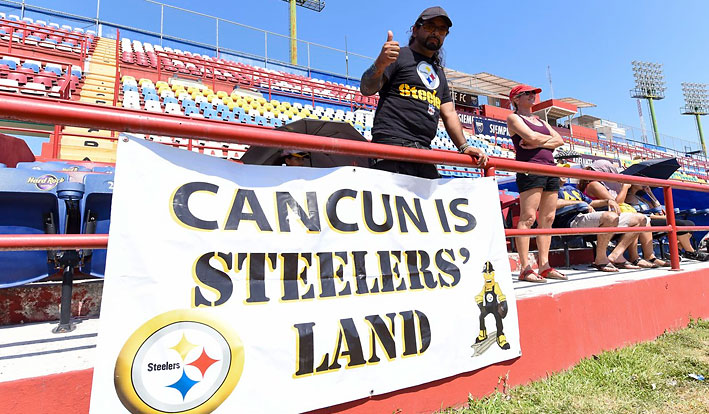 Here’s the funny part – if you look at the crime index, Mexico City is about as dangerous as several U.S. cities. Philadelphia, St. Louis and Jacksonville (yes, Jacksonville) have higher crime indexes. While some of the Mexican states are under travel advisories through the United States State Department, people heading to Mexico City do not receive those advisories.

A Case For A Mexican NFL Game

There are legions of Steelers and Cowboys fans in Mexico – as well as for other teams. Mexico City is a hub for NFL fans in the country. This could be a great opportunity for the NFL to add – what else? – another revenue stream to a money maker that has beaten all predictions. If you consider that Oakland, Detroit and Baltimore also have higher crime indexes than Mexico City, that means you have six U.S. cities currently hosting eight NFL games a year that feature comparable risks. Adding a regular season game in Mexico City each year could bring in additional cash for the league and exposure for the game. If the NFL is committed to sending teams across the Atlantic Ocean each year, it should also consider going just south of the border.What would make sense for a first game? Given the fan bases, a Cowboys-Steelers game would be a no-brainer. Jerry Jones, owner of the Cowboys, is notoriously loath to sacrifice the revenue that a home game would bring him, but it’s likely that the league could find a way to compensate him for at least some of those $75 parking passes that he wouldn’t be able to see if the team had a home game in the Azteca. If the NFL is serious about expanding international games, Mexico City makes a lot of sense. SourcesNFL.com (http://www.nfl.com/player/jeromebettis/2499642/profile)Wikipedia.org (http://en.wikipedia.org/wiki/Estadio_Azteca)
Older post
Newer post